You are here: Home » News Comment » Our first look at what all Rugby Men and Women would love to have in their possession - in 2016! 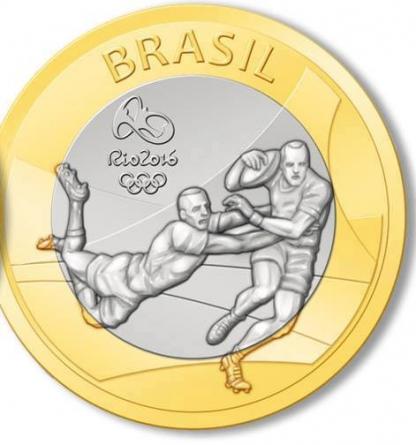 Here's how an Olympic Rugby Gold Medal will look for those winners of the Men's and Women's competitions in Rio de Janeiro in 2016. They are a simple design - you might even say not particularly artistic - but they will be so keenly fought for!

Who will win them? The favourites are clear-cut; in the men's its Fiji, South Africa and New Zealand while for the women it's New Zealand, Australia and England I reckon. But look out- there could be major upsets! USA have the most exciting Men's team this year while Canada women can never be ruled out.

Tommy Lawton was a stand-off half, or five-eighths, noted for the smoothness of his play, his ability to pass well and his excellent goal-kicking. A Queenslander, he moved to Sydney when rugby went into near recession in Brisbane during and after the First World War.

Lawton was a Rhodes Scholar at Oxford University, winning three blues. He later toured Britain and France with the famous ‘Waratahs’ team – New South Wales – in 1927–28. He was a vital man in that team and scored 127 points, a record for an Australian on such a tour. Decades later the games against international teams on that tour were accorded official Wallaby test status.

His tally of 60 points – including points scored in the subsequently recognised ‘tests’ of the Waratahs tour – was not beaten as an Australian record until the 1960s.

Tommy Lawton died in 1978 and did not see his name carried on in Australian rugby by his grandsons, Tommy jnr and Robbie, who came into international rugby in 1988.