You are here: Home » News Comment » A Top night at the cricket in Wellington. Three Rugby Men very well hosted. 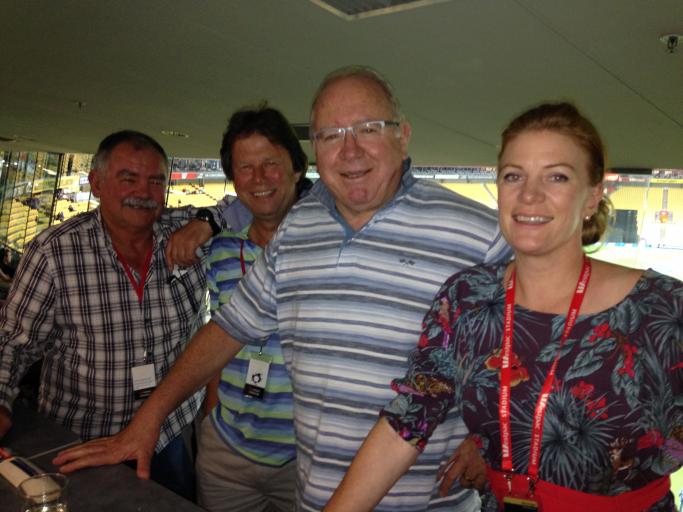 In the photo left to right are ex-All Black captain Dave Loveridge, the ex-All Black fullback Allan Hewson, yours truly (who will be back at the same ground commentating rugby sevens in sevens days time). Completing the pic is Adair Cameron, the General Manager of Williment Travel Group, in Wellington. Adair's friendly team hosted we three, and others, watching Sri Lanka playing New Zealand. It was a great night of fun and sporting chat. And watching the game unfold.

Hewson and Loveridge of course  were top cricketers as well as All Black heroes in their time. At one point last night they were sharing anecdotes of their time in opposing teams at a Brabin Shield youth rep  tournament in Gisborne. Allan went on to play first class cricket for Wellington and Dave was a Hawke Cup rep for his home province of Taranaki. My own 'greatest' moment from the game of cricket was commentating for radio one Plunket Shield match in Whangarei in the early 1970s. I thought I did a fair job but was never invited to do a second game! (However I did make 94 on Whakatiki St No.6 field in Upper Hutt one time. It was in Hutt Valley 3rd Grade D division cricket - and my teammates said I choked!) (I think they were correct!)

At various times over recent years Williment Travel have invited the three of us to lead their All Black Supporter's tours to far flung places in the globe. We have all had wonderful times with them while watching the All Blacks play; all due to the organisational and professional excellence of Williment Travel.

Allan also led a cricket supporter's tour to the last World Cup in the West Indies.

Many thanks Adair and to Jo Boyd and Phil Langridge and the Williment team.

Every day there is Rugby History 16 September 1972

The All Blacks beat Australia 38-3 at Eden Park. Commentator Bill McCarthy described the action as the cameras rolled.

A vital part of the rugby game in New Zealand and Australia, but not always used in other parts of the rugby world. It used to be that the job of retrieving the ball for players in a game once the ball had crossed the touchline was a solely masculine prerogative. This is not now the case. Often girls do the job equally as well.

The ball boy’s or ball girl’s role is to field balls quickly when they cross the sidelines so as to get the game restarted without delay. It is a duty much vied for by young rugby people who relish the opportunity to take part in a big occasion, and to watch their heroes close up.