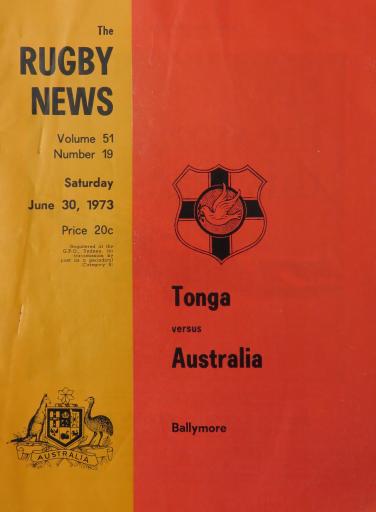 Isn't it amazing what you sometimes find in a box of old 'stuff' at your place. This is one such piece of rugby memorabilia.

In amongst a box of old clippings and papers I found the programme of a 1973 rugby day which Australia would prefer to forever forget but Tonga will always shout to the heavens over!

That year Tonga celebrated having completed 50 years of organised rugby in the 'Friendly Islands.' To celebrate there was a tour to Nuku'alofa by a 'International Invitational' team, there was also a tour by the New Zealand Maori team and Tonga's test team flew out on a two-month tour of Australia and Fiji.

Wow! What a year!

There was a mix of results for the Tongans; they shared a win each against the Invitation team (Which was curiously 'co-captained' by 37 year old Colin Meads and 44-year old Uaisele Latukefu); Tonga beat the New Zealand Maori team by 11-3 in the only test match and Tonga were then well beaten by the Wallabies in the first test in Sydney by 30-14.

But instead of fading meekly ahead of the second test the Tongans ran out onto Ballymore in Brisbane and were all fired up. They scored a superb 4 tries-to 2 victory by 16-11. Australian rugby was stunned. The result hastened the end of several test careers while some others quietly decided to accpet invitations to join professional rugby league.

Apparently the score would have been much more if the touring team's goal kicking had have been better.

[It was considered then - and still is - Tonga's greatest test victory. (Right up until their Rugby World Cup win over France in Wellington in 2011]

By all accounts the Tongans were very popular in Australia. One writer wrote warmly about their off-field appearance at social functions; 'with their crimson blazers, shell necklaces and cream sarongs, with taovala belts showing their rank in Tongan society.'

That was nice, although to call one of the players a 'golliwog halfback' the same writer's words would not not have gone down so well these days!