You are here: Home » News Comment » When Will it End? Rugby Players just keep on Getting Bigger! 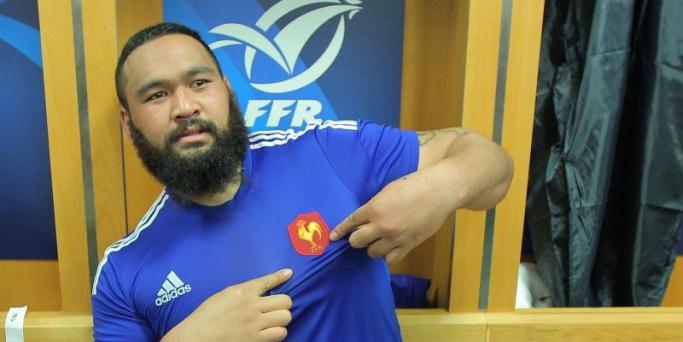 Don't get me wrong here. I congratulate Uini Atonio for being selected in the French rugby team this northern season. Uini (pronounced 'Weeny') Atonio made his test debut before Christmas coming off the bench v Fiji in Paris and with all the attention then on the exploits of the All Blacks, Springboks and Wallabies in their tests in UK, Atonio's arrival and unique story kind of slipped under the main news.

But this week France announced its first test squad for the Six Nations championship and the name of Uini Atonio is there again.

On two accounts his is such an interesting story. Firstly he was born in Timaru, in the South Island of New Zealand. His parents are Samoan-born and like a considerable number of other Polynesians they arrived in New Zealand to look for work in Timaru where there are meat works, factory and farm work opportunities. The lad was born there and later went to school as a boarder at Wesley College in South Auckland. That's the school which has a fine rugby tradition, the most famous of its old boys being Jonah Lomu. Say no more.

From the school's famous First XV Uini was then snapped up by the local Counties Manukau Rugby Academy and by 2011 he played his first two games of representative rugby as a tighthead prop.

But other scouts were lurking and a Frenchman Patrice Collazo spied the young New Zealand giant. Collazo was a tough prop forward and in his new capacity as coach of the southern coastal French club of La Rochelle he was given carte blanche to find big forwards for the club.

So Atonio was approached and soon he left his New Zealand background and began playing in fully professionally in France. Such was his progress in the La Rochelle team that soon he was being talked about as one of the best props in the country.

To play for France he had to fulfill the required 3-years residency qualification. When that was achieved in 2014 he was straightaway elevated into the full French squad. Next week he will begin to play the game at the highest levels.

But Uini is unique in another matter, and it is one which actually makes me think about rugby's future.

On the announcement of the French squad he was listed as weighing 146 kilograms (23stone 6 pounds). This in itself made me blink with astonishment. When I read it, I then checked other French outlets. Amazingly, elsewhere, I found that this 24-year old was listed as weighing 155kgs (24st 6ilbs).  From my knowledge such size must make him the biggest player ever to run onto a test match pitch.

Which leads me to the delicate balance of asking. While it is a 'bravo' to Atonio for reaching his new honour I still ask the question - "where will this end?"

We already know that collisions in rugby have grown to be a disturbing crunch of bone and muscle to a level which the toughest rugby guys of even a decade ago would probably shy away from. Concussion and safety from the often seen sickening collisions of ruck-smash and at the 'clean-out' in forward play have become the biggest talking point of rugby's current state. The game's very future as a safe game for kids to play is being discussed at the highest levels.

The question is; How can we reasonably expect players who weigh considerably less than 146 kgs in their weight to be able to tackle men of such mountainous size. I expect that as all men continue to get bigger, to sadly see more broken necks and serious injuries.

Look, none of this is 'Weeny' Atonio's fault. He is what he is. (And I saw him being interviewed on French TV while speaking impeccable French - so the lad from the tough streets of Timaru has done very well for himself) But what is next for rugby when men of his size are increasingly coming into the game?

TWO men of 145 kilograms colliding is not something I'd like to see from the game that I love.

I know what I'd do - I'd hope that given a choice (as most kids are) that my two grandsons might take up basketball, soccer, hockey - or anything else you can think of, instead of playing a game where a knockout is on the way to you at any moment on any Saturday you play.

[Footnote; Some told me Fiji's Billy Cavabati finished his test career weighing 165kgs. I seriously doubt that - but yes - Billy was a BONNY presence on the playing field!]

All this raises the point though that if we've got players now who are officially listed as 150-plus in kilograms and are a ball of muscle and sinew then we must expect even more 'collateral damge' from the game.

(Loose translation; 'When I put on the French team's playing kit, I say to myself; "Look, I am playing for France, I know how to speak French; therefore I am French!')

Every day there is Rugby History 1 September 1946

I cannot believe it was so long ago! But right from a VERY young age at Benneydale and Berhampore in New Zealand I knew I wanted to write and talk about rugby - and I've been doing it all my life. (And many more to come I hope!)