You are here: Home » News Comment » There are still very nice ways to speak in rugby union! 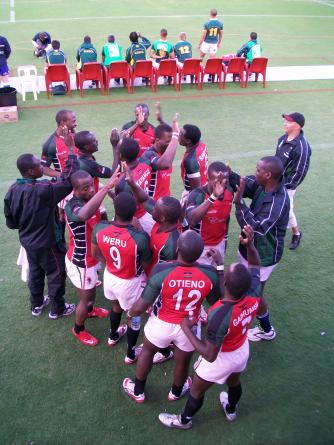 I found this quote the other day while trying to find out a few notes about the 2015 Kenyan Rugby Sevens team ahead of the next HSBC Sevens World Series event in Las Vegas. When the star Kenyan try-scorer Collins Injera was urgently called home after the earlier Wellington Sevens to be with his wife who was expecting a baby any day suddenly it was considerable news. I put the news comment in here just because I like the way the Kenyan team management speak about their man. Enjoy it...

Sevens Head Coach Felix Ochieng said (about Injera's departure), “(Having a baby is) of course a life event that we as a team and management do not take for granted. We appreciate the role loved ones play in the well-being of our players and management. The family are the unsung heroes who celebrate quietly, and soldier the emotions in good and bad times. We respect the institution of marriage in the same breath as we do employers and academic institutions.”
“Yes, Collins plays a pivotal role on and off the pitch in our team and his commitment to the cause is unquestionable. We wish him well and look forward to having him back in the fullness of time, training more enthused than ever as a proud father.”

Every day there is Rugby History 3 September 1905

Click to show The date of birth of one man who was to be part of 3 generations of ABs.

These games have become an anachronism in modern rugby. ‘B’ internationals between second – or ‘B’ teams - of countries were played mostly in the second half of the 20th century. The British, Irish and French were the countries that mostly embraced the idea. For a time, some of the hardest games of each European season came in the international ‘B’ matches. The Wales v France ‘B’ teams, in particular, had some robust encounters between 1970 and 1989 when they met annually.
Internationals involving ‘B’ teams were never as popular in South Africa, Australia or New Zealand, though each dabbled with the concept of fielding a ‘second’ national team at some stage.
South Africa actually used to call its ‘second’ selection the ‘Junior’ Springboks. Australia fielded a ‘B’ team for the first time in 1988 when it met New Zealand. In 1991 New Zealand ‘B’ met Australia ‘B’ in Brisbane. New Zealand won an exciting match 21–15.
In 1992 England B toured New Zealand, playing two ‘tests’ against a New Zealand second team that was called the ‘New Zealand XV’.
Modern marketing phased out the concept of ‘B’ games. In the 1990s they were replaced by ‘A’ internationals. The new concept was a marketers way of enticing the paying public to believe they are not seeing second-rate players in action.

So the short history of ‘B’ teams came to an end. Ironically, this was followed by the decision of many countries, led by Wales, for economic reasons, to not even field an ‘A’ team any more.

In the decade from the 1960s through to the fourth test of 1970 the All Blacks played exactly 100 test matches. What % did they win?