You are here: Home » News Comment » The Day Feeble All Black bosses Made Jerry Collins Take the Rap 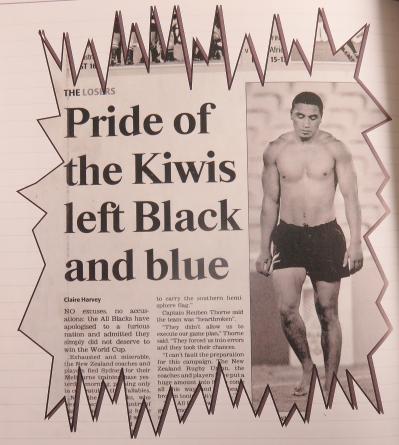 My rugby writing friend Frankie Deges of Buenos Aires has this week wondered why I did not include in my website 'tribute' to the life Jerry Collins any mention of the time I was furious with the way Collins was treated by the management of an All Black team which he had just given his guts on the field for... so I publish that story right here.

BACKGROUND: The incident I will reproduce here happened at the Rugby World Cup in Sydney in 2003. Jerry Collins was a newbie in that event's All Black team. Before that World Cup he had played only eight of the 48 tests he would eventually total. And when the critical semi-final was played he was just a fortnight past his 23rd birthday. He was not the captain or vice-captain; Jerry was just one of the troops in that team.

The 2003 All Blacks were coached by the tough, hard man - or so they said - John Mitchell. His assistant was Robbie Deans. Mitchell played that whole year and Rugby World Cup competition close to the chest working hard on what he called 'The Journey' towards winning the World Cup again. He was especially tough in his relations with the media - but that's another story.

But it all came unstuck for 'Mitch' on a cloudy afternoon on November 15 2003 at the Sydney Olympic Stadium (then called Telstra Stadium). Australia won a dramatic semi-final by 22-10 and therefore the All Blacks were bundled out, sent instead to the third/fourth game.  My story here is not about the actual playing of the semi-final but of what the so-called brave team management did to Jerry Collins in the immediate moments after the final whistle. I was disgusted that day at the way the All Blacks treated 'one of their own.'

This extract is taken from my year-long 2003 Diary which was turned into a book called 'Journey to Nowhere - A Personal Diary of the Rugby World Cup Year.'

NOVEMBER 15 2003; (the diary entries were written in the present tense)

What follows at the end of the game is very sad. And I wonder if the New Zealand public knows, understands - or cares - about what I am about to write. Maybe they won’t. I’ll write it anyway.

Under the grandstand at Telstra Stadium after the final whistle what occurred shows much that is bad about the public relations of the 2003 World Cup All Blacks. Immediately the teams come off the field, Bernadine Oliver-Kerby steps in with her microphone for the compulsory “world feed” one minute TV interview. That is all it is allowed to be. No one quite understands that this is the case. Nor do people understand the difficulty this assignment is. Bernadine really only has time for two, maybe three questions, and the captain being interviewed knows this too. In any game when the captain is from the losers he does not want to be there, but he has to be. There is a contracted professional obligation for him to do so.

So tonight Bernadine offers the All Black skipper Reuben Thorne a chance to explain his immediate feelings at the shock defeat. I think she does the right thing. Just asks him for a personal reaction. Nothing more, nothing less. Reuben is looking blank and shattered but at least he has fronted up. But in that length of time, just 60 seconds for the interview, there is no time for any depth of inquiry. So the impression is given to some back home that TV has let Reuben off lightly. That is not how it works.

While the Thorne interview is taking place, George Gregan is standing close by. Within a gap of ten seconds he steps up and does the same length of interview with his Aussie TV station interviewer, who is Tim Horan. That having been completed, all the TV stations around the world. who are taking the full telecast, and therefore paying massive satellite fees, then break away quickly to resume their own programming. That’s how it works. Reuben Thorne moves away to the team dressing rooms.

At that point we at TVNZ, probably because we are representing a crazy rugby nation, are still on the air and quite reasonably we then ask (though we never demand, remember, for these are the All Blacks) for coach John Mitchell to come out and speak exclusively about what we have all just seen on this sorrowful night.

To remind you, this is a huge story for New Zealand. The All Blacks, our team, have just crashed out of the World Cup at the semifinal stage. The hopes of our passionate millions, late on a Saturday night, have just been shattered. The people at home will still be watching. In Sydney we know they will be wanting more. So media man Matt McIlraith disappears into the dressing room with our request.

He comes out and we are told Mr. Mitchell is “not available.”

We ask again. This time our request goes via TWI, (Trans World International) the British-based World Cup marketing group. They have Max Heddy there; his job is to make sure things work efficiently for all the world TV feeds. Max is an old friend and a very respected operator. He does not have to do this but he does. He asks again at the dressing room door on our behalf for Mr. Mitchell to please front. Again, our quest is declined.

Of course we know that behind the door there must be some devastated people but dammit we think we are entitled to some immediate reaction from the team bosses. So we ask - please - for someone in authority from within the team room to come out and speak to the nation about what has gone wrong in this disaster.

I shall not soon forget what happens next. The sight of a battered and scuffed Jerry Collins emerges from the dressing room and stands glumly in front of the cameras. He is shirtless and shaking; his hand repeatedly plays across his face. He might be wiping sweat from his brow but instead I wonder is it tears he does not want us to see? I wonder why this young man is out “fronting up” when Mr. Mitchell is still inside the closed doors? Surely this is a day when someone of real clout from within the team has to emerge and look the massive home TV audience in the eye.

No, instead we are offered one of the team’s babies.

The interview, by John McBeth, comes from across town where he is at the Epping studio, and its agonising to watch. Young Collins can hardly raise his eyes off his feet. In the manner of so many of our delightful but shy Polynesian people, quite simply he looks ashamed. His replies are honest, of course, but who can expect this man, a mere cog in the wheel of the All Blacks, to answer tough questions. He cannot be expected to be qualified to do so. Instead, while he speaks, the fat cats of the team remain inside in their flash suits, sheltering from the storm.

And when the interview is over Collins turns away from going back inside the dressing room. Instead, he wanders back out onto the empty Telstra Stadium. Only the working media, pulling in cables and carrying boxes away are left there. Collins walks out across the darkening field wearing only his pair of All Black shorts.

His barefooted track takes him across to the other side where he embraces a woman (A girlfriend perhaps, a sister, or his mother? It is too dark and too far away to be certain.) They speak together for a few minutes before he trudges back. A truly sad sight, one which, from high in the stands, we commentators agree, should never have been allowed to ever happen.

Our live programming back to New Zealand ends. TVNZ too has other commitments on this Saturday night. We cannot wait endlessly, embarrassingly, for “no shows” (as all the media seem to have done all of this year). Before our coverage ends other players, Spencer, Marshall and McCaw do front up, but to repeat, John Mitchell chooses not to. And neither do Messrs Deans, nor Manager Tony Thorpe or the other All Black selector Mark Shaw who is at the game somewhere.

To me, this aftermatch episode shows one last fatal flaw in the character of John Mitchell and the planners of his year’s campaign. While it may have been understandable that Mitchell has preferred to maintain a low profile in his media availability during the season, (maybe he just plain doesn’t like the media “lizards” as he has called us), there comes a time when to ignore the paying people of New Zealand rugby (that’s the fans back home) it is a sign that he is treating those people, many of whom have supported him throughout difficult days, like shit on his shoe. And I mean it.

The moments under the stand today, for me, become those of deep shame for this All Black team. It looks like the management didn’t have the guts to offer opinions on the whys and wherefores of the defeat. And worse, when it was time to front up, they hid behind a kid and let him do the explaining.

AFTERWORD: My diary did go on to note that Mr Mitchell did later that night, along with Robbie Deans, attend a full press conference in front of hundreds of the world's newspapers and radio. It is the immediate live TV interviews and the pushing forward of Jerry Collins which I was so disgusted at. It has riled my memory ever since.

Your comments on this story; either by twitter to @keithquinn88 or to quinnk1946@hotmail.com

Every day there is Rugby History 15 November 2003

Click to show Stirling Mortlock races away & the All Blacks go out of the 5th RWCup.


Arguably he was the slowest back on the field but nothing could stop the flying Mortlock; his try that greatly assisted the Aussies in their 22-10 sensational dispatch of the All Blacks.