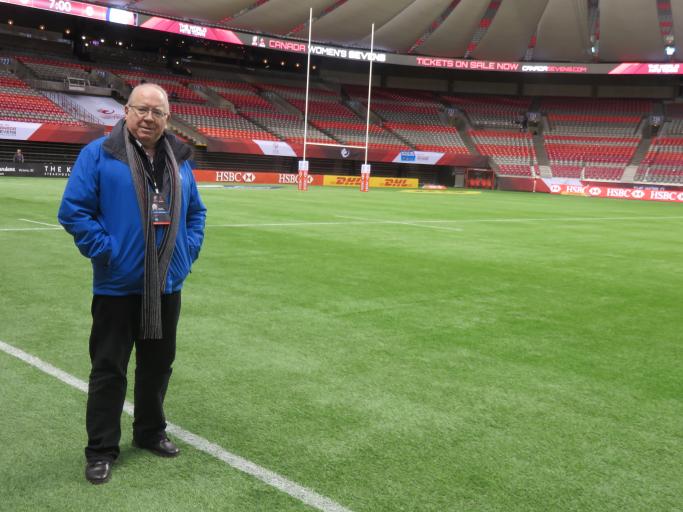 In many ways it took the city of Vancouver in British Columbia, Canada to set several new standards for hosting and staging tournaments of the HSBC World Sevens series. Read on...

The players of the 16 competing international sevens rugby teams, and we of the following media, who had travelled up to Canada from the previous week’s activities at the 2016 Las Vegas sevens found a very warm welcome from the local officials of Vancouver. They were very excited about staging a sevens tour event for the first time.

Of course we kinda knew their welcome would be warm; Canadians are like that aren’t they? And we weren’t even put off from enjoying their new tournament by the local weather which was raining and pretty awful for the full week we were in town.

That’s because the first of the two key matters which will now mark the Canada tournament as distinct from every other in the event’s 16-season history were; 1) that the two days of action (45 games) was held on a flat even but full-sized artificial playing surface. That meant there was no excuse for sluggish play. Indeed the evenness of surface encouraged speedy, dynamic action which thrilled the crowds throughout.

The second exclusive factor was the superb BC Place stadium itself. It has a closed-roof design which has not been seen on any sevens tour tournament before. The locals had closed its roof days in advance of the playing action. That meant any outside elements were therefore shut out completely. That encouraged the crowds to come, umbrellas not required. In fact on day one so many fans turned up at the same time that there was early congestion at a number of the entry points. A nice problem to have I would have thought!

To be absolutely correct the artificial field was not exactly unique to the Vancouver event as part of the HSBC World Sevens Series. The previous week in Las Vegas the field there, in place at Sam Boyd Stadium had been synthetic too, but it had been widened from a previous American Football width of 59-metres so therefore was still not quite that of a full-sized rugby union field.

Canada’s conditions provided just that – the roof above was the bonus which made it unique, quite the best ever on the tour.

Speaking modestly I am one of the few who should know; I was there in Dubai in 1999 when the IRB sevens circuit made its tentative touring start. In about 110 stops which I have made since then the playing conditions for the sevens in Vancouver have never been bettered. I have to say it but new standards have been set.

To the point now where suddenly it might feel very strange for the best 12 men’s and 12 women’s teams when they set out in stern Olympic competition in Rio in August. Current photographs show that hard-working crews are in Rio trying to meet deadlines for constructing the simplest of fields set on the outskirts of town with marquees and temporary stands being manoeuvred into place. We are told teams might change to play in giant impermanent structures.

It will be at the very least a great contrast between the standards set in Vancouver and rugby’s newest and grandest showpiece event – the Olympic Games.

A prop who made the headlines in 1949 when his prodigious goal-kicking for the Springboks helped them to beat the touring All Blacks 4–0 in the test series.

In the first test New Zealand led South Africa by 11 to 3 at one stage. Goal-kicking duties had been allotted to the Griquas fullback, Jack van der Schyff, for the match, but after he missed two shots Geffin picked up the ball and, uninvited, took the next penalty.
Geffin put over five penalty attempts, virtually beating New Zealand, 15–11, on his own. It was a record number of penalties for any player in a test match up to that time. He did the same in the third test, scoring all of South Africa’s points in its 9–3 win, and in the other two tests he kicked three further goals.

Hailed as a hero that year, Geffin made the Springbok team for the 1951–52 tour of Britain where he also scored impressively with seven conversions –a test record – against Scotland. South Africa won 44–0.

By then Geffin was 31 years old and he eventually lost his place in the Springboks’ scrum. But he will always be remembered as a match-winner by fans of the Springboks – and by disappointed New Zealanders!

His nickname of Okey came from his habit of responding ‘Okay’ when called to take a shot at goal.