You are here: Home » News Comment » Barcelona 1992 - This is the 5th of nine Summer Olympic Games Keith Quinn has attended 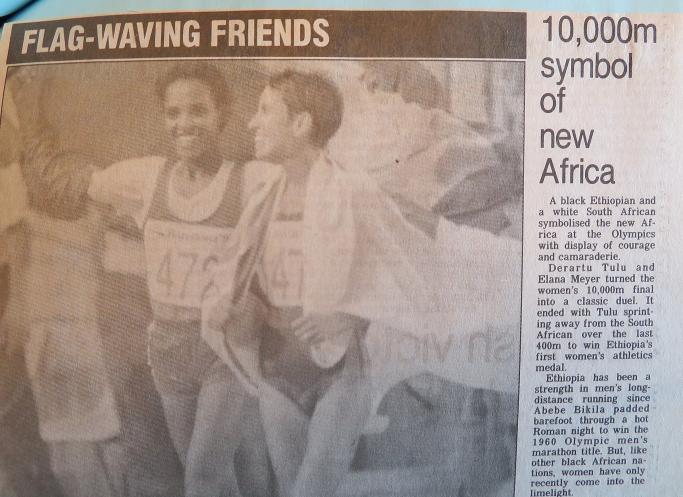 One of Olympic history's most symbolic races; Barcelona 1992

I tell you the first week of the 1992 Barcelona Olympic Games was a nightmare to live through. No, it wasn’t because we had a lousy hotel, or the traffic was too tough, or there were horror boycotts to contend with.

No, this time it was because it was so damn hot!!

Honestly, for a poor little Caucasian white boy like me the temperatures scorched and sizzled, especially I recall, in the first week.

They told me that at the Barcelona swimming pool where I was calling races for TVNZ the temperatures would soar to to over 40 degrees Celsius. I can believe it. Being outdoors was one thing; being cooked was another.

You see, the planners for the Games had always wanted the swimming pool to be open to the bright light of day. And you couldn’t really argue with that. They wanted the divers to be shown on worldwide TV bouncing up into the sky and silhouetted again the bustling skyline of one of Europe’s most visual cities.

But, we broadcasters were not concerned with tourists. The TV bosses of all countries said, in sharp terms, what about us workers sitting all day on the concrete seating doing commentaries with no cover at all from the blazing Catalan skies?

Complaining changed nothing of course, because in this world all commentators pretty soon work out that no one gives a tinker’s cuss what their working conditions are like. So we sat, sizzled, sautéed and in the sun, for eight long days at the Olympic Pool.

Mind you, being a somewhat resourceful fellow I worked out a way to cope. I took to getting up earlier than anyone else. I would ride on the early bus for the morning swim sessions. I would get to the pool before most of the other hoards of writers and reporters. That therefore gave me the chance to pinch as many bottles of ice-cold water as I could hump in my bags into the commentary area. Not that they stayed ice-cold but, hey, I had ‘em.

Then between the morning session of heats and finals, when there was a break of three hours I would take the media bus back to the village where we lived. It was a 45 minute journey as I recall.

Back at ‘home’ I would strip down to my undies (stay with me folks!) and try to cool off. All I could do was sit on the side of the small bath in our flat (there was no shower to have only an Olympian water shortage in the brand new apartments)

Being sufficiently cooled I would then rinse tomorrow morning’s shirt, put a new one on and venture back to the bus. Needless to say I was soaked again with perspiration before I made it to the pool.

The saga than continued. In the media room I would return to being a crafty, devious person once more. Stacking up as many water bottles as I could I would venture back to the scorching hot commentary box.

When racing began I would go into a swap ritual of switching the two hats which I had acquired for use each day.

First, the wide-brimmed hat I would put on to keep the dry searing heat off my lily-white ears and thinning hairline. But that hat was useless for wearing while a commentary of a race was on. The headphones would only pull down the sides of the brim and cover my ears. When they did that I couldn’t hear the producers call me from the studio. Very important to hear their ‘cue’ to start all races. Plus, I did prefer to look like Joe Cool instead of looking like a country boy hick with the brim pulled down like Bozo the clown!

Thus, just before each race I would pull a baseball cap out of my carry bag. I would fill it to the top from one of my water bottles and then, all at once, throw the water and cap back into place on my head. That cooled me down for the race call. The headphones also fitted nicely.

Any wetness of hair, head or shirt would be dry within a few minutes. I did not care what the hat and water ritual looked like. I must have looked a right plonker to others but I wanted to survive these Games, right?

One day a photographer saw me make the hat switch and he took my photo. I spied him a couple of days later and asked “What did the photo look like, the one that you took of me?” He replied in a heavy South American accent, “Hey, you are one crazy kiwi, you are front page news in my newspaper yesterday in Bolivia!”

Honestly it is strange what one remembers looking back but Barcelona was all about surviving from the killer heat wave!

Notwithstanding that, there was some great racing in that Olympic pool. The one race I remember most of course, was when the 17 year old New Zealander Danyon Loader came storming home in second place in the 200 metres freestyle. His swim defied all the pre-games world rankings which had been issued for us to pour over. No one knew about the kiwi kid. Maybe Duncan Laing his coach did but not many others.

Danyon was just a shy, to the point of being almost timid, lad from Dunedin. That was when he was out of the water. We had first seen him at the 1990 Commonwealth Games in Auckland when he was just 14. There, he was so pleased to be part of the Games scene he seemed to live in his New Zealand tracksuit for a fortnight.

In Barcelona he was still painfully awkward in front of the media, not ever seeking the limelight. But who says that’s a bad thing? I didn’t then and don’t say it today. Danyon is a modest man. But that day in Barcelona he had us all roaring for him. He was suddenly one of us, a New Zealander. It just so happened he discovered for himself that he could be an animal in the pool. No wonder he went on four years later to become our greatest swimmer ever, winning two golds at the Atlanta Games. These days he’s a good friend, and a man at ease with himself and the media. Good on him.

Certainly other marvellous memories will last long in my memory, like the heat from our stay in Barcelona. One thing was seeing the adulation for the great American basketballer Magic Johnson at the Opening ceremony. That was truly heart warming; athletes idolising a man who was HIV positive, highly poignant at the time when there was less tolerance than there is today for that horror infliction.

The opening ceremony was a wonderful display of Catalan and Spanish culture. The Queen of Spain was there, dabbing her eyes with the emotion of it all. That was even though for many these were not a so-called ‘Spanish’ Games, it was Catalan all the way.

There was emotion of other kinds once the track and field competition started. In particular was the trackside embrace of a white South Africa woman, Elana Meyer, and a black Ethiopian, Derartu Tulu. The two had battled grimly for the women’s 10,000 gold medal. Round and round the track the two had gone, never a half-metre from each other.

Their embrace at the end, with no one really caring who had won, while the cameras flashed, was followed by them swapping their national flags for their lap of honour. The world noted the symbolism of that in the pictures which were flashed around the world in the next few days. That image remains one of my all-time favourite Olympic memories.

Another personal favourite was seeing a completely unheralded woman winning a major track event. Greece’s Paraskevi Patoulidou jumped and leapt in unconfined joy when she shocked the world as she won the 100 metres hurdles. She was Greece’s first ever female gold medallist in track and field. Before Paraskevi no Greek woman had ever been better than 14th in an Olympic final.

The Barcelona games were a massive success for the province of Catalonia. Beforehand many had expected the organisation to be slow (in the Spanish tradition of “manana” perhaps?) but nothing could be further from the truth. The efficiency and timing of events was to the second. And if there was tight security in 1992 I don’t recall it. These were happy games to be at. But did I mention to you that at times it did happen to get quite hot!

So in the end we packed up. The Barcelona Games were over.  We headed for home having seen a Games where a record number of 176 countries competed.

I remember the city now as a breathtakingly beautiful place, especially the Gardens of Montjuic, the tree-lined walking streets of Las Ramblas with its myriads of shops and buskers. And finally the bizarre and eccentric architectural work of the genius Gaudi, his brilliance seen nowhere else in the world, the man who left his mark on a remarkable and unforgettable Olympic location.