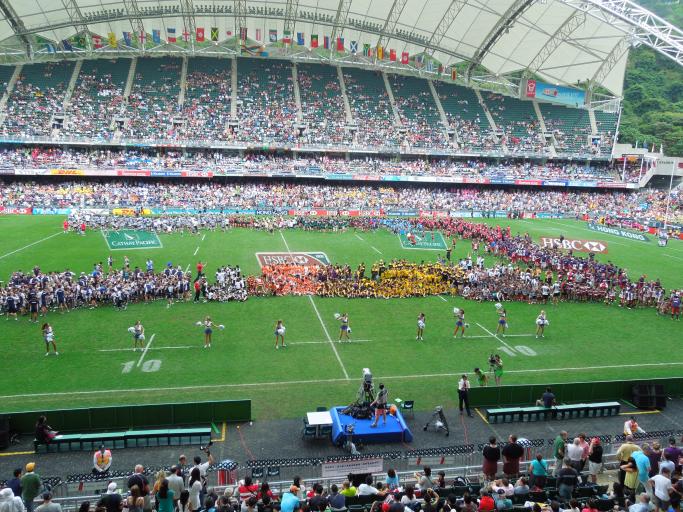 The McClure family of Wellington New Zealand have been friends of my family for 25 years. Wife Cindy and Husband Lance have two kids and they live in the suburb of Lower Hutt.

Lance has served in the New Zealand police force for all of his working life, rising to be a Senior constable. Several times he has been posted to the Solomon Islands to assist in the rebuild of that country after violent storm damage.

This year Lance sent me this touching and very sad story of rugby connection and also about the loss of one life in the recent floods.

WHEN the Solomon Islands sent a rugby team to the Hong Kong 7s for the first time in 1983, one of the key players was Leonard Pugeva. But now 30 years later Leonard's family and the rugby community are mourning.
Leonard died in the raging torrents of the flashflood of the Matanikau river on Thursday last week and his body, and those of three of his grandchildren who drowned in the flooded river, will be taken to his home village of Tokengau in Bellona for burial today.

He took up rugby in 1971 and was 27 when he first represented Solomon Islands at Hong Kong according to historical records.

He had previously represented the country at the 1979 South Pacific Games and in 1980 at the Air Pacific Trophy competition.

This information paper comes from a member of the rugby community who was shocked to hear of his passing in such tragic circumstances.

Two of his children and a daughter-in-law and her brother survived the flood waters and were plucked from Point Cruz harbor by rescuers on boats.

Leonard's tragic story was played out in other families in Honiara last week and there are many others who lost mainly mothers and children.

He and his family had almost completed their family home on the bank of the Matanikau river near Vara creek where they operated a small canteen while he bought timber to complete the structure.

With his eldest son he was attending to the timber when the flashflood hit the canteen and then washed everyone downstream.

The house was then hit by debris and it collapsed into the river and floated downstream with two hundred pieces of 4 by 1 inch timber.

Leonard will long be remembered in the rugby community.

He went to Hong Kong twice and played for several years before retiring.

His second son Masunu became a national representative in both wrestling and rugby 7s.

His legacy to sport and to his family will live on.

He is survived by his wife Teisi, several children and several remaining grandchildren.

Teiti's people in Honiara and Wagina are also in mourning.

Fa’ako Liolea, another former rugby star, married Leonard's sister and was with the family most of the past week, and their rugby playing partner Joe Uilelea and his wife (Teiti's sister) sent condolences from Samoa where Joe is a Congregational Minister.

Most of them played at Hong Kong again in 1984.

Click to show The All Blacks play a test against neighbours Western Samoa for the 1st time.

How many test matches for Australia did the three famous Ella brothers play, on the field at the same time?