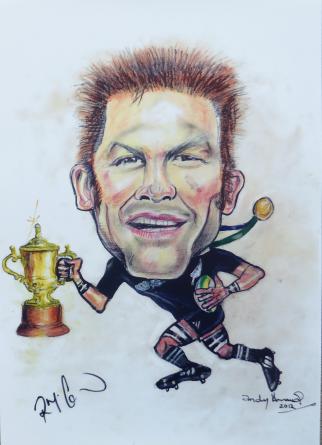 Are there any more accolades coming the way of this Rugbyman? (captured here by Andy Herraud's fine cartoon in 2012)

This cartoon was commissioned by Billy Graham and the Naenae Youth Charitable Trust in 2012. It was done by Lower Hutt's Andy Heraud.

The 1930 ﬁnal was one of the most dramatic for the club. One of its players, 18-year-old wing Michel Pradie, was so badly injured in a qualifying match that he died that night in hospital. In the ﬁnal in Bordeaux against the Quillan team, the score was 0–0 at full-time. In extra time the Agen fullback Marius Guiral, who had replaced Pradie, seized the ball and drop-kicked a goal from 45 metres. Agen won 4–0 amid scenes of high emotion and relief. That night the president of the FFR said the dropped goal had the ‘breath of poor Michel Pradie carrying it towards victory’.

In 1945 Agen won again with two of its strongest club personalities in the team: the indomitable Albert Ferrasse (later president of the FFR) and Guy Basquet.

The 1966 ﬁnal was one to forget more than savour. Agen beat Dax by 9–8, but the game was so full of dirty play that the Minister of Youth and Sports was moved to ask ofﬁcially what the FFR intended to do about it.

The federation accordingly stepped in and suspended three participants in the game for life! (The suspensions were lifted after one year.)

In the 1976 ﬁnal Agen won again by 13–10, but only after extra time. By this time the team had René Benesis, Daniel Dubroca, and Alain Plantefol, all current or future French internationals. Its opponent that year was the formidable Béziers club, which won so heavily in the championship in that decade.

In 1984 the club was not quite so lucky. Again the two teams in the ﬁnal were Béziers and Agen. Again extra time was needed before Béziers won 3–1 on penalties after a 21–21 draw.

More than a rugby club, Agen has been one of the strong power centres of French rugby. The elevation of Albert Ferrasse to the presidency of the FFR ensured that. The town hosted an International Rugby Board meeting

in 1989. Several internationals have been held on Agen’s home ground, the Stade Armandie, which was renovated to host games for the 1991 and 1999 Rugby World Cups.

In 2002 Agen made a bold attempt to win their 9th French Club Championship. In a glorious final at Stade de France the game went to extra time but Biarritz won 25.22

If there were a New Zealand rugby NPC State-of-Origin contest, which province would Grant Fox play for?

Grant Fox would play for Taranaki; he was born in New Plymouth.