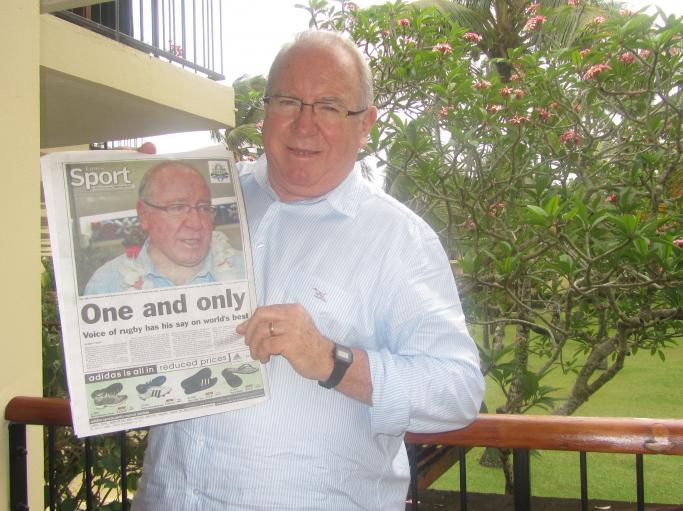 Upon leaving secondary school he went straight into broadcasting. He made his first on-air effort on radio in May 1967, reading the sports news on New Zealand's National Radio. His first appearance on TV followed, as a sports news presenter, in 1968.

His first rugby commentary was on radio in 1971 and on television in 1973.

By 2016 he could look back on having attended all eight Rugby World Cups, the Summer Olympics Games ten times, the Youth Summer Olympic Games once (In Nanjing in 2014), ten Commonwealth Games and three Paralympic Games.

He has also broadcast on the world 7 aside rugby circuit in the last 16 years. He made visits to approximately 120 global cities for these tournaments. He has been to the Hong Kong Sevens 25 times since 1988.

He has written 15 books, mostly on the subject of rugby, including the ‘Encyclopedia of World Rugby’ which went to three global editions. His own life story ‘Keith Quinn – A Lucky Man’ was published in 2000 and sold 20,000 copies.

His most recent published book in 2015 was 'Quinn's Whims' his collection of thoughts and records of the 2015 Rugby World Cup. It was the third in a similar series of mostyl rugby anecdotes; the others being 'Quinn's Quirks' (2007) and 'Quinn's Quips' (2012).

In 2017 he began a personal attempt to document, by way of boutique publishing, detailed records of each Rugby World Cup tournament. His effort on the 1987 Cup tournament, called 'Statistics and Stories of the 1987 Rugby World Cup' already exists and 1991's book is finished. He began 2018 detailing all games, scorers, files and records of the 1995 event. The summaries of all players and referees build from each tournament into previously unseen files.

In 2012 his book, 'The A-Z of Meads', was a popular contribution to the 'legend' of Sir Colin Meads in New Zealand. It contained the best yarns and stories from the life and sports career of the great All Black, Meads.

Keith was the MC for the unveiling of the statue of Meads in the main street of Te Kuiti in June, 2017.

Keith still broadcasts occasionally on New Zealand radio stations, writes columns for 'NZToday' and others when approached, contributes to his own website "KeithQuinnRugby.com' and is a regular contributor on twitter. In 2009 he joined Sky TV as presenter for a four season run on the show called ‘Test Match Stories.’ Between 2010-and 2016 he was a regular commentator on the popular series ‘Land Rover 1st XV Rugby, which show-cased Secondary Schools rugby.

During the tour of New Zealand in 2017 by the British and Irish Lions rugby team he became an internet reporter for the first time. He filed in-vision reports via Skype for a Turkish TV Station in Ankara.

In 1997, in the Queen’s Birthday Honours he was made Member of New Zealand Order of Merit (MNZM) for services to sports journalism. In 2002 he was given a 'T.P' Lifetime Award for an 'Outstanding contribution to sport through journalism in New Zealand. In 2005 he was awarded the International Olympic Committee’s Sport and Media Trophy, to recognize a sports journalist for his/her best contribution towards the promotion of Sports and Olympism in their country.

In 2010 he was awarded the annual Steinlager Silver Salver by the New Zealand Rugby Union for 'Outstanding Service to Rugby' in New Zealand. Other winners of this award have been Sir Brian Lochore, Sir Fred Allen, Sir Colin Meads, Sir Terry McLean and Sir John Graham.

In 2016 he was presented, by the Sport Wellington organisation, with a 'Lifetime Contribution to Sport Award, for service to sport in Wellington City.'

In 2014 he was appointed President of New Zealand's oldest 'Playing Through' rugby club - The Wellington Football Club. It is for a three-year term. (It is agreed that Nelson Football Club is older but twice it went into abeyance during the war years. The Wellington FC has fielded senior 'adult' teams every weekend since 1870. Hence it is call NZ's oldest 'Playing Through' club.) The club is so old in New Zealand terms, the word 'rugby' does not appear in its masthead.

He is married to the very patient Anne (in 1970) and they have three children and five grandchildren.

Keith and Anne were also popular leaders on All Black Supporters tours to UK and France from 2007-2014. At the 2015 Rugby World Cup he was an 'Ambassador' at the Rugby World Cup for the Wellington based New Zealand travel group, Williment Sport Travel.

Click to show A little town called Wollongong in Illawarra, Australia, had a rugby moment on this day!


The local Illawarra team played the All Blacks and a young New Zealander called Colin Meads, aged 20, made his AB debut. 15 seasons later he retired as one of the greats!