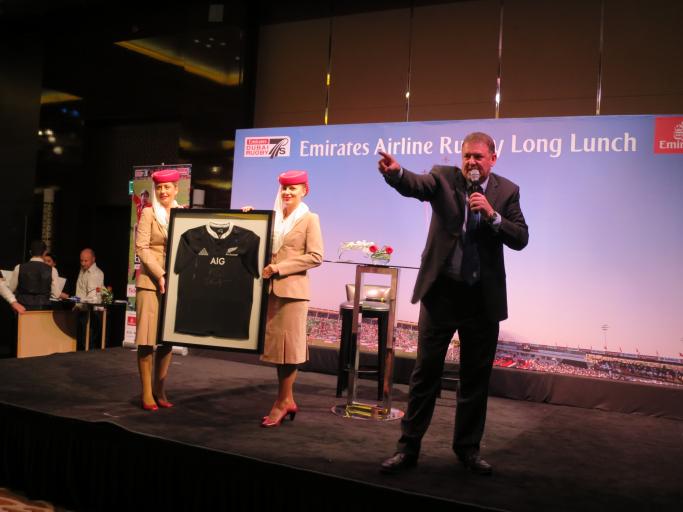 There we were the other day; two blokes sitting at home on a rainy afternoon in Wellington. We had nothing to do except pass the time of day away. The wives were out shopping and like the diligent husbands we are we were waiting at home for them. It was too early for a beer, there was tea in the pot and a new cake on the plate. But when we started talking about the composition of the 2015 All Blacks World Cup team the cake got ignored and the tea went cold.

Obviously one of the two blokes was myself; not quite a self-claiming world authority on the game but not far off - depending on how I feel on some days! The other man was my good friend and a great friend of the All Blacks - Graham McNally of Dubai.

Let me introduce you to Graham. He works for Emirates Airlines and it's funny but he turns up all over the world at significant rugby matches - and rarely misses an All Black test match wherever it is played. What a job he has! He drifts in and out all over the planet to the point where some of us light-heartedly call him 'Fog.' (Geddit?)

Graham's a good bloke and we've been cobbers since I started going up to the Dubai Sevens in 1999. He has only one mark against his name and that is that if in doubt he always plugs for the Canterbury player first. Just joking...

Make no mistake though this bloke knows the game; he can weigh up each player of recent years against all others because, well, he has seen them ALL in action in ALL their test outings. Most importantly via his red-and-black thinking he reckons he has a good knowledge of the conservative and loyal way Steve Hansen will go with his picks this year.

So Fog and The Prince (self-claimed!!) decided while waiting for the gals, based on the form of last year and the Super 15 form we've seen this year, to have a crack at picking the best 31 players Steve Hansen will pick to take to the Rugby World Cup this year. (Each team is allowed 31)

We two blokes came at our views from two different leanings; I think I am still some kind of professional observer from the media boxes while Graham has a closeness of contact with the current players via seeing them close-up and knowing many of them quite well.

So here is what we came up with; To misquote slightly old Sam Malone from behind the bar of 'Cheers' '- It's only two men's opinions.'  See what you think...

Fullback; Ben Smith with Charles Piutau (if he can be pulled out of his contract difficulties in France)

Wings; Julian Savea and Waisake Naholo (That's only two you say - but though Piutau could play there, read on below.) (Naholo turns out to be onlu 'uncapped' player, although I recall how brilliant he was at the Rugby World Cup Sevens in Moscow in 2013)

First-five; Daniel Carter, Colin Slade and Beauden Barrett (Now this was the interesting bit. My mate with the read and black occluded vision reckons that the late run at this position by Daniel Carter will mean Hansen WILL take him. Loyalty and all that. Colin Slade will also be there as he offers back-up all over the back line. And there there's Beauden Barrett, who while being an outstanding no.10, might also find himself getting time ON THE WING this year to allow Carter to start in the games and build into form. That means there might be no place in the World Cup team for such excellent outer backs as Israel Dagg, Cory Jane, Ryan Crotty or Piutau (if the contract thing is too tough) And even Aaron Cruden wouldn't make it should he recover in time from injury.)

Halfbacks; Aaron Smith, TJ Perenara and Andy Ellis. (The last-named is running hotter this year I believe than Augustine Pulu. But there is a lot of earnest debate about Ellis we hear. As for Brad Webber, promising though he is, he will not crack it in Hansen's thinking - this year at least)

[So those are our backs - I pushed hard for Nehe Milner-Skudder to be included, under the heading of 'there ought to be at least one player in the backs the world hasn't seen before'...but in the end we have gone with the conservative approach of what we believe Steve Hansen and the other selectors will do.]

Many of the forwards pick themselves;

Locks; Brodie Retallick, Same Whitelock, Luke Romano and Jeremy Thrush. (No Pat Tuipolotu - we already know he is out for the year)

IN SUMMARY: We reckon these are about our best 31 players of the moment. I myself, say that the team has too many players in it's ranks who are past their best years, or who are knocked about from the collision game rugby has become. But we have a coach who will not go very far outside those he knows - plus they are on his books too - remember that.

Will this team win the Rugby World Cup?  From this distance I am inclined to say 'no' at first instinct - I feel that South Africa and England will be more favoured and with more blood coursing through their younger and home-influenced players.

We simply have a lot of questions about our squad and its ability to stay the course. However I say that knowing that this current New Zealand squad certainly knows how to win games - they have shown that in abundance in recent years (12 wins from 14 games last year).

As for 'Fog?' - what did he think? Well, sitting there with his tea cup balanced on his knee, I didn't directly ask him the above question but I suspect he hopes that his man Richie (he's a red-and-blacker you know) will be the one holding the Webb Ellis trophy highest on finals day.

UNLUCKY TO MISS OUT: We made a list of these as well. I also think that from the above 'chosen 31' there will be at least three serious injuries which will mean they will NOT travel to the Cup. So keep the following list in mind too; (And remember the Stephen Donald story). We think the aforementioned Dagg, Jane, Milner-Skudder, Pulu and Webber will miss out, but go close. Plus Pat Osborne, Ryan Crotty, Robbie Fruean, Lima Sopoaga, Matt Todd, Victor Vito, Brad Shields, Blade Thomson, James Broadhurst, Dominic Bird, Joe Moody, James Parsons, Jeff Toomaga-Allen and Uncle Tom Cobbley. But we'll see.

Meantime,  the ladies have returned with bulging shopping parcels (dammit - we two men are now poorer) ... and McNally and I have therefore to come out of our dream world and come back to reality.

It was a fun exercise.

Let me know what you think of this team...at quinnk1946@hotmail.com

After an unauthorised tour to South Africa in 1986 by senior All Blacks (the ‘Cavaliers’), players who toured were banned for two test matches. The New Zealand selectors therefore had to cast further afield for a team to play a test against France in Christchurch and in a following game against Australia at Wellington. They opted in choosing from younger or second-string players who were active around New Zealand.
The relative youth and inexperience of the new team soon earned it the affectionate nickname ‘Baby All Blacks’. The team’s popularity was ensured when it beat France, 18–9 and lost narrowly, 12–13, to Australia.
The Baby Blacks included a number of players who were to become seasoned All Blacks: David Kirk was their captain, while Joe Stanley, Sean Fitzpatrick, John Kirwan, Frano Botica, Terry Wright, Mike Brewer and Andy Earl all represented New Zealand for years.