You are here: Home » News Comment » The Evolution of 100+ Years of All Black Test Captaincy 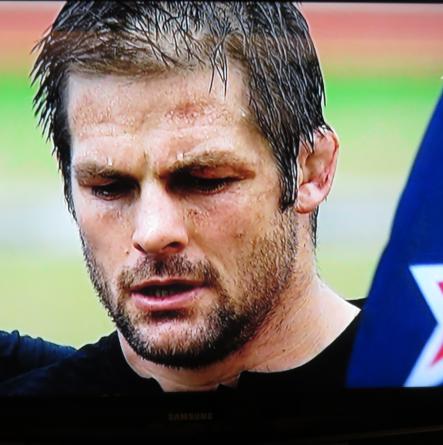 WHO HAS HELD THE ALL BLACK RECORD FOR 'MOST TESTS?' From the start of the ABs until now.

[WITH THE 2015 RETIREMENT OF RICHIE McCAW THE PROGRESSION AND COMPARISON OF HIS DOMINANCE OF ALL BLACK CAPTAINCY RECORDS IS NOW WORTH PLACING INTO PERPETUITY. It might even be said with some surety that McCaw's record of 148 tests played, with 110 as captain will never be broken]

[These records are taken from Keith Quinn's 2015 book 'Quinn's Whims.']

Any discussion about which players have held the records for most appearances for the All Blacks should have two main starting categories;

1) Most Appearances on the field in any match,

and 2) Most Test matches.

Here we note the 'rise of Richie' in terms of the number of test matches he has played - as against the number of games available to the great players of earlier years.

For the purposes of this record it is widely accepted that the start-off point for record-keeping for the 'first' All Blacks' test match totals should start in New Zealand in 1903 and for 'all matches' from the first major overseas tour to UK and France in 1905-06.

From the 1905-06 team one man Fred Roberts, the half-back, played 51 times between 1905 and 1910 to equal the mark set by his contemporary, Billy Wallace who had made his All Black debut in 1903 and finished his international career in 1908.

The progression of Billy Wallace's record total of 11 test matches was not so well-recorded as significant back in the 1920s etc but it is in modern times by far the most significant record now.

Watch how the early- historical totals compare to that of modern players;

[Therefore the two brothers shared the All Black test record [at 24 tests] for five months until Don Clarke went ahead of Ian's 24 when Don appeared in his 25th test v Ireland in Dublin in 1963.]

Don Clarke then added to his record until he reach 31 test matches in 1964.

[In the season which followed both players reached 98 test matches together as the shared All Black test record-holders. Their final totals 'together' were reached at the New Zealand v Australia match at Brisbane in 2011.]

Richie McCaw went past Mils Muliaina's total of 98 test matches and became the record holder on his own in the New Zealand v Tonga Rugby World Cup match at Auckland in 2011. Thus 99 test matches became the new record for McCaw.

[NOTE II: McCaw's 100th test match as captain of the All Blacks was achieved in the New Zealand v Wales match in Cardiff in 2014.]

110 is McCaw's final total of test matches as captain of the All Blacks. That was also achieved at the 2015 Rugby World Cup final match v Australia.

by Keith Quinn (with thanks to Roger Moses)


Bay of Plenty sevens expert Gordon Tietjens takes his first NZ team to Fiji. They didn't win the tournament there but Tietjens stayed coach for 20-plus years