You are here: Home » News Comment » RIP Martin Crowe Not Only a Cricketer but a Great rugby producer too. 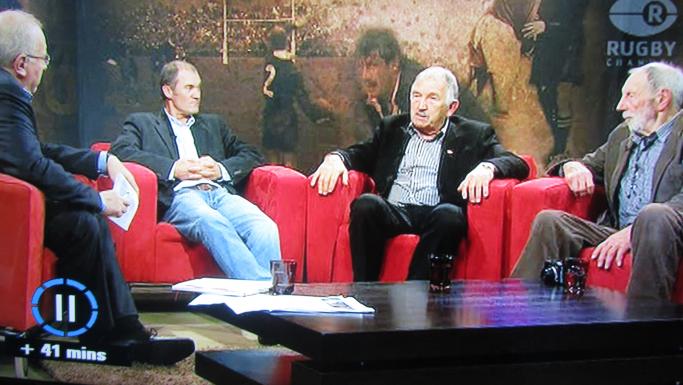 These last few days there have been many fine tributes to test cricketer Martin Crowe. After his death the accolades to Martin have all been warm and all deserved.I was never a cricketer of any note but I would like to offer a tribute to him here if I may. Because Martin Crowe became a huge influence in my life.

In my career story I worked as a rugby commentator and reporter for TVNZ for 40 years until I was made redundant in 2007. TVNZ had run out of sports to show and therefore they had no need to retain sports staff.

Then one day early in 2009 the phone rang at my place. ‘Hello Keith its Marty Crowe here,’ said the voice on the other end.

I knew him a bit (always as Martin by the way) from a couple of years I had been on the TVNZ cricket touring crew as a ‘graphic’s production manager.’

[In fact he and I used to joke that I had ‘cost New Zealand the Cricket World Cup at Eden Park in 1992’ when he had asked TV staff for a weather report for the semi-final day against Pakistan and I had sent a note to the New Zealand team’s dressing room saying that according to the weather office ‘rain will come to Auckland by mid-afternoon.’ That apparently meant if Martin won the toss he would bat first and score quickly early on so that Pakistan, when the rain did come, would be behind on the Duckworth-Lewis system. And therefore New Zealand would win. The rain did not arrive so Pakistan romped home.]

But the 2009 phone call was to ask me ‘why aren’t you on TV talking about or commentating rugby?’ To which my reply was, ‘because no one asks me to.’

Our conversation ended with something like, ‘well, Sky TV has recently made me producer of the Rugby Channel so I’d like to fix that.’

And that began four years of an intense professional rugby relationship between myself and the great former New Zealand cricket captain and a fuller and very close friendship away from work. I last saw him at home sipping red wine just weeks ago with his wife Lorraine and his great cobber Grant Fox.

On TV the first thing Martin and I did ‘together’ was a show called ‘Test Match Stories.’ They were one-hour episodes in which he as producer allowed me to play to my love of ‘yarning to old rugby blokes about the good old days in the game.’ What fun we had!

Every former All Black we asked, in their pairing’s, would fly in each week and I would let them ramble over their rugby years, talking out about their battles, struggles, triumphs or disasters on the test match rugby field.

I had massive fun in each episode, encouraged at all times by Marty for me to try to bring out their best memories. And these old blokes did too, all for payment of two bottles of wine and a one-year subscription to the Rugby Channel.

[My favourite show was a live interview for an hour we did with Cyril Brownlie and George Nepia. These were not the two great men of the 1924 All Blacks of course, but family descendants with the exact same names. The two younger men had great recall of their family memories of ‘great granddad’ and away they went. Nostalgia filled the air.]

And after each show on a Monday morning there would be an email summary of the show on my laptop from Marty going through in exact detail everything I had said to the guests; how I had emphasised this or that, and what was good or bad.

I was initially taken aback by this ‘effrontery.’ After all wasn’t I the veteran of 40 years in the media talking about the game? While Marty, on the other hand, had often said to me in the build-up weeks, that ‘he had little knowledge about New Zealand rugby as he’d essentially been out of the country every home winter for 17 previous years playing off-shore cricket somewhere?’

Gradually though I came to look forward to his weekly critiques. Because that’s what they were. And I had never had such production scrutiny before. They were only designed to make me better in technique and performance than I had been.

While I came to really enjoy the feed-back from him it helped me understand how others in the cricketing game that I had read about had not always appreciated him trying to fine tune or alter greatly their established techniques at the crease.

In 2010 Martin then ‘bought me back’ as a full-on TV rugby commentator when as Sky’s Rugby Channel producer he drove hard and succeeded in starting up the incredibly popular Land Rover 1st XV rugby series. In the first year there were just 26 games covered. But the school game’s popularity soon touched a core in New Zealand. The ratings (or subscriptions) raced like fire in the fern. When the first game between Auckland Grammar School and King’s College hit the screens ‘subs’ started zooming from an initial 30,000 to end the season approaching 80,000.

Marty was delighted of course, but always only in his measured way to us; the words to the TV crews each week and to the regular commentators Ken Laban, Bull Allen, Steve Davie and myself were always balanced and fair; almost as if he was saying, ‘OK, we’ve dispatched that ball to the boundary, how can we do the same with the next one?’

For me, with his exactness of detail and preparation, his balance of censure and fairness and the time he took to comment on what the commentators or reporters  put out onto the air makes him for me, and I have been saying this for several years now so it's not new, he was ‘the best TV producer I ever worked for.’

And one other thing; in life I never saw Martin Crowe anything else but impeccably turned out. So he made sure we commentators were too. A reflection of himself perhaps? We all soon had wardrobes bulging with sponsor’s suits, shirts, raincoats and ties. We looked a mass of dash if nothing else. So thanks Marty (and I suspect Lorraine too for her input.)

I have a favourite story about Marty.

I was in a car one time on a trip from Auckland to Rotorua. It was just him and I. What a treat it was going to be for me to hear him talk about cricket tours, travels, tips and techniques.

Instead though, he kept pestering me for – you guessed it – how my commentary of the first Jonah Lomu try in the All Blacks v England Rugby World Cup match in Cape Town 1995 had come about. This was the ‘infamous’ call where I had stumbled over the try touching-down sequence from big Jonah.

So I told him that sometimes before big games I used to prepare in my mind ‘headline’ words for incidents which I thought might happen in any game. I had done that before the Cape Town clash. It was to create a kind of mental picture of that night’s post game TV News a scene with my voice booming out an appropriate banner moment of high excitement. Some commentators do it, some don’t.

I tried to explain this to Marty in my fumbling manner. But straight away he said, ‘I understand totally. I often would play up-coming innings in my mind before a game or tour. One time Simone (Marty’s first wife) and I were living in Queenstown. One afternoon I went downstairs to the garage and picked up a cricket bat and gloves. I adjusted the gloves and took up my batting stance. In my mind’s eye I was beginning a test innings at Lord’s. I shaped up and then ‘left’ the first ball from Ian Botham go outside the off stump. The next one I ‘defended’ with a solid shot and the third one I clipped off my hip for a single to 'get off the mark.' ’

‘What followed, Marty continued, ‘was my full innings, batting all afternoon under the sun in London - though of course the garage door was always firmly shut in Queenstown. I played shots all round the wicket, took quick singles; made two’s or three’s, and beautiful boundaries. I even had pauses while other blokes faced; one time I threw my head back in the air for a bad shot I’d played which nearly got me caught. I gave it everything! Then after about an hour of lonely batting 10,000 miles from Lords and with sweat pouring off me I drove an imaginary shot through an imaginary mid-on and reached my century! I even waved my bat to the thunderous Lord’s ovation.’

‘But just then the garage door swung open and Simone came in; she said ‘what on earth are you doing?’

To which Marty said, ‘I’ve just scored a ton at Lord’s.’

‘I don’t think she understood. But I did!’ Later that year, of course, in real life Marty DID score a test century at Lords.

RIP Martin Crowe my old friend who helped this old bloke a lot.

In Las Vegas at the World Rugby Sevens series – and therefore unable to attend the funeral next week.

A distinguished player and official with Fijian rugby, George Cakobau began his playing career in the years prior to World War II. He toured New Zealand as captain and an outstanding five-eighths with the famous unbeaten Fiji team of 1939. (Another member of that team was Ratu Sir Penaia Ganilau, who became Governor-General of his country and who played a major part in the negotiations following the military coup in 1987.)

Ratu Sir George Cakobau’s prominence in the administration of Fijian rugby marks him as one of the fathers of the game in that country. He was the Fiji Government’s representative on several tours in the 1950s. He was also a Fijian team coach and manager of various Fijian touring teams from 1951 until 1969.

A grandson of the last king of Fiji, he was a long-serving politician, rising to the rank of cabinet minister. In 1972 he was appointed Governor-General of his country.