You are here: Home » News Comment » Keith Murdoch - One More Story on the Mysterious Life and Lonely Death of the Banished All Black. 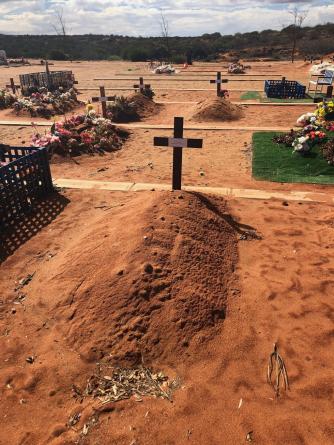 This Story by Keith Quinn for keithquinnrugby.com: The discussion of the end of All Black Keith Murdoch's life has recently become been a cheerless one to absorb. The beginnings of the demise of the tough prop forward's playing career is very well known.

It dates back to the night in December 1972 when the ‘powers that be’ who were behind the 1972-73 All Black tour of UK deemed that a late-night scuffle in a hotel kitchen in Cardiff between Keith Murdoch and a Welsh local hotel security guard called Peter Grant was considered a serious transgression  by Murdoch of team rules; to the point that he was sent home in disgrace to New Zealand.

This was a major story at the time of course; never before had such a prominent rugby player been dismissed from an international tour for a few swung punches.

Murdoch was hustled, no other word for it, off a train in London into a black limousine with British rugby officials inside, and driven to the bottom of the steps of a Jumbo Jet flight at Heathrow Airport. He did not go through normal exit procedures. As though he was a banished criminal the doors of the flight were closed behind him and with that Murdoch effectively disappeared from public view for most of the rest of his life.

It was soon learned that he changed his flight to New Zealand at Singapore airport and journeyed instead to Perth, Australia. Did he prefer that instead of facing the New Zealand media? We will never know for sure.

In effect he lived in Australia, in various far flung locations, mainly in Western Australia for the best part of the next 46 years.

New Zealand rugby fans never forgot him but no one could get to the full 'bottom' of the Murdoch story. Many in-depth articles were written, even a successful play, and several books have been or still are being planned about his life. And lots of rumours.

It is known that a number of times over the years Murdoch did temporarily return home; the story goes they were mainly to see his mother in her later years in Dunedin or to see other family or mates. A loyalty from family and friends built around his seeming unconditional desire for privacy and seclusion. At the end of each of his visits he would fly back to anonymity in the outback of Australia’s west.

Keith Murdoch was born on 9 September 1943 in Dunedin and his death aged 74 was announced on 30 March 2018. He might have lived a mainly nomadic and silent existence but many of the world’s most significant newspapers like The Times, The Daily Telegraph and The Guardian in Britain published full obituaries of the ‘incident’ which had him dismissed from the All Black team. And the mystery of his privacy in Australia was always considered curious enough to be included too. (Even The New York Times ran a full obituary of Keith Murdoch in life and death.)

Back home there has always been a feeling akin to a shame held by many rugby supporters that more probing was not done by New Zealand rugby officials to assure Murdoch as the years rolled by that he could come home. There seemed no need for him to serve a life sentence offshore for a one-punch scuffle.

He even missed being present to attend the significant presentation ceremony of his official ceremonial All Black ‘Cap’ it was only posthumously sent to his family in the mail several weeks after his passing.

So now the reclusive Murdoch has gone but the sadness of his absence from New Zealand still carries on. And there are even more continued touches of mystery too.

He apparently died near a Western Australian coastal town, Carnarvon, which is, by road, a hot and dusty drive about nine hours north west of Perth. Recently a New Zealand couple John and Cathy Christie of Riversdale Beach in the Wairarapa, while on a caravan tour of the west were alerted to perhaps look for signs of Murdoch's passing in Carnarvon. Local officials directed them to the town’s local cemetery several miles out of the town. They were told to look for ‘plot 1314.’

And there, at a place you might say is a reminder of a ‘Boot Hill’ sort of scene, they stood at the resting place of one of the most talked about athletes in New Zealand’s sporting history. You might also say that lying under the red soil with only some twigs scattered about is the body of one of the most discussed men among any rugby conversation anywhere in the world from the last 50 years.

But included in this sad and poignant scene still there is mystery. A close look at the grave reveals that glued to the cross of the humble tomb is Murdoch’s full name (he was only ever Keith Murdoch) and that fact is correct. His correct birth date (9 September 1943) is there too.

But (at the bottom of this story) his death date is shown on the cross as 27 February 2018. And that is at odds with the three weeks and sometimes four weeks ahead of the ‘announced’ dates published of his passing in the various world’s media.

To say Murdoch’s grave is a modest location is an understatement but in looking closely at the photographs maybe it is the last declaration by him of his desire for secrecy and total anonymity - even if only for four weeks after he had eluded everyone one more time.

(With thanks to John and Cathy Christie) 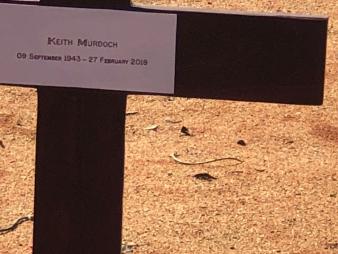