You are here: Home » News Comment » Forget yachting and the Olympics for a moment; Rugby Is going to miss PJ Montgomery too! 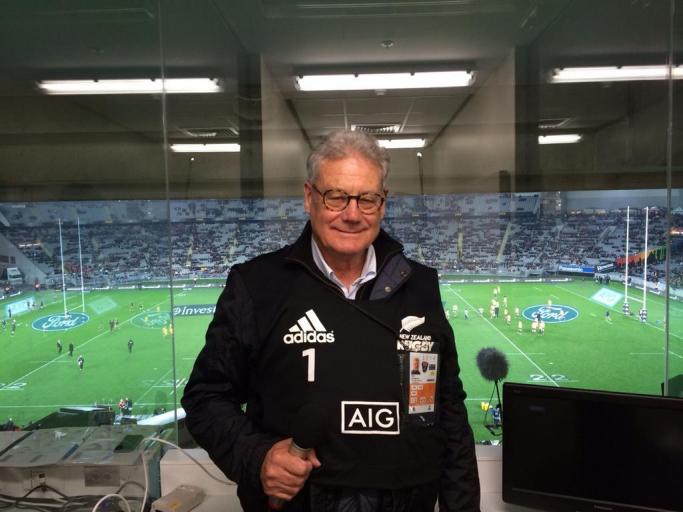 While I was away in Nanjing in mid-August I gather the media in New Zealand radio and rugby gave Pete Montgomery of Newstalk ZB in Auckland a good send off at the end of his sports broadcasting career.

I read from afar that Pete is retiring because he says 'it's time' for him to do so.

Fair enough he's entitled to his opinion. (I actually dispute that as Peter looks young and fit and healthy to me. Therefore I think he could go on some more. But hey that's his business...and the last time I looked New Zealand was still a democracy!)

I will say it again as I have said it before. There has been no finer or animated watcher or person who takes enjoyment from viewing and talking about the events of the various sports he really loves than a man who has been a great international broadcaster, Peter (‘PJ’) Montgomery. Especially in the world of yachting where he has set the standards for world wide sports commentary excellence. At the Summer Olympic Games his record is impeccable as well - having attended nine of them!

But in rugby it is not widely remembered that he has been in the commentary business for as long as anyone else, certainly in New Zealand. I have a personal memory of doing my first rugby commentary at Eden Park in Auckland in 1973. I was the protected safety of a commentary box high above the playing field. PJ, on the other hand had to have a police cordon to protect him when he his sideline introductions.

It has been my privilege to know Pete since we were both kids in our early 20s back in the 1970s at 1ZB in Auckland. (That’s, gulp, over 40 years ago). I have known Pete to be a person of impeccable character and integrity. And if you haven’t grasped it via his on-air commentaries Pete has had an enthusiam for life and sports which never dims.

And yet there's another dimension; if he is onto something which he REALLY likes then look out! He goes into an even deeper state of abstraction, complete with flashing eyes behind his glinting spectacles. His face lights up with a unique brightness. His expressions and descriptions become vibrant and almost trembling as he relays what has just caught his even more concentrated interest.

This week here in 2014 I went looking through my notes about Pete and came up with this story I wrote about him from the 2008 Summer Olympic Games in Beijing. It says much about what I have said here...I hope you enjoy it's re=written version here.

OLYMPIC GAMES, BEIJING 2008: "I have seen this expression of animation from him a number times at the Olympic Games. Pete Montgomery is unique. I hope I am like him.

We have been blessed to enjoy many sights and sounds in this world from travelling along the career path we have both chosen. Many times we have both stood in wonderment at thought ‘how lucky we have been in life.’

But Beijing in China got him the other day.

You see, in the week running up to the Opening Ceremony each of the TVNZ staff here in Beijing was given a day off to recover from the rigours of travelling over from Auckland. A group of our people went into work, another gang went shopping and yet another party went off to see the Great Wall of China. PJ was in the last group.

It was a steaming hot day and the intrepid kiwi tourists had to travel an hour or so out of town until the great edifice came into view. Well, they saw just some of its 4000 miles!

When the 'Wall group" came back to the hotel after their day away and arrived all tussled and flushed from the heat outside all had been impressed. They tried to find the words to describe one of the world’s great wonders of human construction. And then I saw PJ!

His eyes were glazed beyond the others. He was in a kind of wild trance. He stammered for his words. Initially I was worried for the man’s welfare. Had the heat of the day got to him? He grasped my arm and pulled me down to sit and listen. And when he spoke his great powers of expression were tested to the limit.

“Today Keith,’ he began, staring ahead into a kind of middle-distance, ‘I saw one of the greatest things I have ever had the opportunity to experience and try to understand! How DID those people, all those years ago create such a wall…golly it’s so long Keith…it goes on and on and on…golly, it was all so even and precise in its construction, how did they do it?…gee it was wonderful, fantastic, amazing! It disappeared for miles and miles and miles.’

There was even more from Pete.

You get the picture? PJ Montgomery, this Prince of Expression had been blown away by the Great Wall and its wonder. It was nearly a case of having to go and get him a glass of water and suggest he have a lie down!

Then he put the day’s experience in the most powerful of personal perspective. ‘Today, seeing the Great Wall, I reckon the experience goes into the Top Five things I have ever seen in my life. It’s right up there with seeing the birth of my two kids, Katie and Johnny, and they are beautiful. Then seeing the Space Shuttle take off one time when I was in the States and then another time with my darling Claudia, we climbed high into the Andes to see Machu Picchu, the ‘Lost City of the Incas’ in Peru. They were all top experiences, but now this today – The Great Wall of China. Wow!’

That was followed by more description, more of reaching deep into Peter’s grasp of language. All his words were accompanied by a slow shaking of the head in awe and bewilderment.

This great man of words had been stunned by – a Wall!

Look, I haven’t even started to tell you of my experiences of listening over the years to PJ talk about his love of yachting, rugby, handball (yes, handball! He loves that game!) in fact of all sports.

You would have heard his excitement and sheer love for all sports from his radio shows and TV commentaries over the years. But here this week, seeing the child-like amazement on his face and his grasping for vivid expression as he told of his trip to the Great Wall of China – well, that in itself was a sight to see!

…….
[Good luck in your retirement years PJ! And what's this I hear about an autobiography coming our way soon?]

Arnold Alcock was a ‘one cap wonder’ whose one game for his country came about in rather unusual circumstances.

Alcock was a useful enough club player for Guy’s Hospital who, it is insisted, never had aspirations at all of becoming an international. Imagine his surprise when he received in the mail an ofﬁcial invitation to play for his country against the touring 1906–07 Springbok team.

Alcock was initially shocked but then felt honoured and on the great day of the game he duly turned up at Twickenham all set to play. Upon seeing him, the secretary of the Rugby Union realised that the man before him was not the man the selectors had thought they were getting. Apparently they had chosen L.A.N. Slocock of Liverpool, and only by a typing error did Alcock receive his invitation to play. By then, of course, it was too late to summon Slocock from the north, so Alcock took the ﬁeld for England. By all accounts he played sensibly and tolerably well. However, it was not a major surprise when Alcock was not invited to play for England again. Slocock was. In fact, Slocock went on to play the next eight internationals.

Arnold Alcock later had a distinguished association with the Gloucester club, for which he was president for nearly 50 years.