You are here: Home » News Comment » Did a young New Zealand radio presenter once influence the outcome of a Blackcaps cricket test? He thinks he did! Find out how he did it... 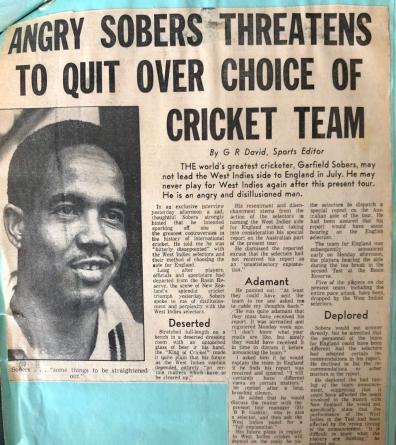 By Keith Quinn (from his book Quinn's Quips) Early in my broadcasting career by 1969 I was deemed sound enough by the bosses of the New Zealand Broadcasting Corporation to be the regular studio host of the Sports Roundup radio show. It was quite simple broadcasting work and therefore very good for a young bloke to be involved with. But one day I think I played a major role in New Zealand winning a cricket test match! Read on...

Basically for that job I would arrive at one of the studios at Broadcasting House in downtown Wellington and open up the show. The 'show' actually was pretty uncomplicated action for me. After going on the air I would read a few news, scores and stories from around the place. Then I would 'cross over' to a major sports event which we were featuring that day and which had commentary running ball-by-ball for hours. While that happened I waited in the studio, monitoring the broadcast in case it broke down. At any breaks in play, like lunch breaks, or rain, or change of innings etc, I filled in by reading more sports news and adding additional news interviews and local updates.

On this particular day in early March 1969 (but 50 years from 2019) the game I was monitoring was a West Indies v New Zealand cricket test in Wellington. The weather was fine, the game was meandering along without need for my interruption, so I arrived at the studio; I supposed I was in for an easy day.

For me at that time I felt that my job was akin to being near the very peak of what was possible in the life of a sports broadcaster. I had made the odd appearance on TV reading the night-time sports news and my rugby reports from the Ranfurly Shield season in Napier were very exciting to do.

So when an assistant editor from the Radio Newsroom upstairs entered the studio holding a telegram (yes, a telegram!) and asked me what to do with it I looked at it and blinked.

So I thought; 'wow! As I am in Broadcasting House this telegram must be directed at whoever the studio host for that day is. So I thought 'I'll be the one who reads out this significant sports team in the next break in play!'

I never hesitated to think maybe the current West Indies team members, battling away against New Zealand at the Basin Reserve, might not have yet heard for themselves who of the current team in Wellington were to be included for the England tour - and who were not included. The tour was to follow in only a few weeks time.

'Surely they would have received their own telegram,' I thought.

Accordingly on the fifth and final day of the test match, when the tea break came at the Basin Reserve and both teams had headed for their dressing rooms the radio commentary (no live TV sets in those days) was audible in the rooms for all the players to hear as they sat down for their 20 minute rest.

In my mind’s eye I now see someone in the West Indies room. on hearing a callow youth (that's me!) start to read from the telegram. The whole room would have shushed down as the implications of what was being said were taken in by the team.

The West Indies had had a tough time in Australia and accordingly, listening back home the WI selectors were not impressed. Changes were seen as being needed from the Australian to the English conditions. So right there on the radio were the changes .the home selectors were making (five out of 16 of the Australian tourists were dropped);

They were read out very publicly by an ego-driven youth who was busting to make a name for himself; rather than checking to see if it was appropriate for him to do so.

Of course after tea apparently on the field at the Basin Reserve all hell broke loose. When the West Indies went back into the fray the most angry ones came from among their pace bowling attack, five had been callously and cold-heartedly and publicly dismissed. Accordingly the bowlers ignored their previous tactics and just charged in, wildly flinging ball after ball loosely at the New Zealand batsmen. The tenor of the game quickly changed totally.

New Zealand had been set 166 to win and at one point were down to 39-3; so a tough last session lay ahead. But with Charlie Griffith and Richard Edwards, two of their speed bowlers both in a rage at being dropped - along with the injured great Wesley Hall New Zealand cruised on to a six-wicket win.

The clipping I kept for my files is not of a glaring next day one; I don't think the reporters at the ground were aware of the 'background drama.' Rather the clipping I have kept it is a 'reflective' interview the captain Garfield Sobers gave to Gabriel David of The Evening Post in which Sobers spoke of being '"bitterly disappointed" with the West Indies selectors and their method of choosing and announcing the side (for the England tour.)

When Sobers added 'the team was subsequently announced on Monday afternoon, with the players hearing the side during the tea break in the second test, 'and the entire pace attack having been dropped'  he said he had 'threatened to quit' as West Indies captain.

I (the secret announcer)was quietly thrilled.

So you be the judge; had I had played my part for my country? Maybe I did = or maybe I didn't. 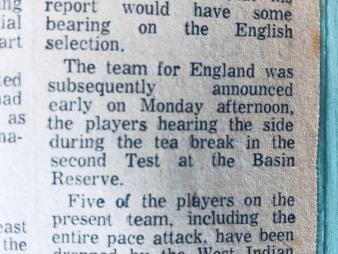 The quote which confirms the above story?

FERRASSE, ALBERT
Elected president of the French Rugby Federation in 1968, Albert Ferrasse of Agen built for himself the formidable reputation of being the most powerful administrator in French rugby.

Born in 1917, Ferrasse played at lock in the Agen team which won the national club championship of France in 1945. Later he made the reserves for the French XV. After his playing days were over, he took to refereeing with considerable success, refereeing the French club final of 1959.

Under his guidance France was admitted to the International Rugby Board in 1978. Ferrasse, very pro-British in his outlook, also fought sternly to allow South Africa to maintain its place in world rugby. Through France’s association with FIRA, he kept a weather eye on the emerging countries of European rugby.

Well known for taking a strong stance on rough play in rugby, ‘Tonton Albert’ (Uncle Albert) Ferrasse also introduced the rigid club transfer rules in France. Outsiders asked about the apparent ‘liberal’ attitude in France towards the amateur spirit of the game, but Ferrasse repeatedly claimed he investigated any complaints of the amateur spirit and could find few, if any, breaches. Talk is one thing, proof is another, he said, when questioned about reported professionalism in French club rugby. He was also once quoted as saying that ‘it is quite an achievement that rugby still resists the aggression of money’.

The authoritative reign of Ferrasse ended after 23 years in December 1991 when he resigned. After a prolonged backstage battle, Bernard Lapasset was elected in his place as the new president of the French Rugby Federation. Lapasset of course, went on to become Chairmain of the International Rugby Board.

In which New Zealand Rugby Province was the Ranfurly Shield resident for the longest duration of time?

Answer; SOUTHLAND (They had the Ranfurly Shield from September 10 1938 until August 2 1947 – which was three weeks short of nine years!) That was more than when Auckland had the Shield from September 14 1985 til September 18 1993 - a total just over 8 years! [NOTE:There were no matches played in the years of WWII. The Shield stayed in the window of H.H.Geddes and son, the menswear store, on the corner of Tay and Dee Streets in Invercargill during the war years.]