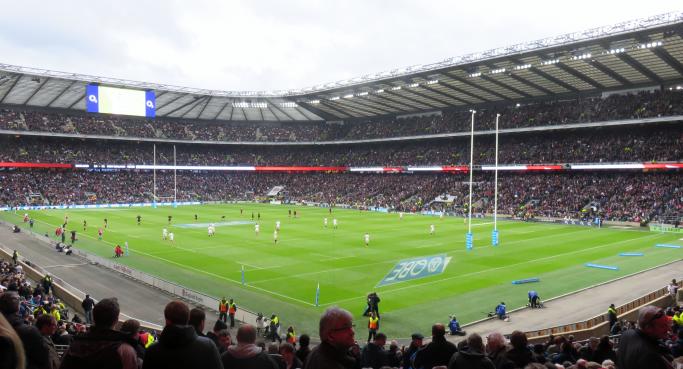 Sitting there, high up in the towering stands at Twickenham my first impression when this game was being played was how tough it was and how long the game took to play!
It seemed to me the first half in particular took ages to reach its 30-minute mark. I guess that was because of the tightness of the contest and the fact that the All Blacks did not have it all their own way.

You have to understand that sitting and watching test rugby with Kiwi fans is still a relatively new thing for me. For much of my working life,(that's gulp, 40 years or so, ago) I have concentrated on commentating the games for TV or I have watched from supposedly quiet press boxes. [It was an old New Zealand Herald 'rule' that reporters never spoke during a game (Dear Terry McLean and Don Cameron would wheel around and glare if one dared to utter an exclamation at any 'goings-on' on the field which had not been detected)]

So all around me at Twickers yesterday I marveled at what I heard - mostly from the New Zealanders on our tour supporter's groups. The first thing was someone really grumping at the crowd singing right over the top of the All Black haka. 'The bastards have no respect!' one of our guys sneered. I know he is a life member of his own club back home. I felt like saying, 'but mate, this is England! They DON'T have to have regard for our cultural differences.' However I let it lie.

I agreed with the next thing I heard, 'Hey Keith, we can't read the bloody numbers of these new All Black shirts.' That was defintely true. Whatever adidas were trying to do with their 'blackest All Black jersey ever' promotion which they had been trumpeting about these last couple of weeks to me it was pathetic that the very people they should be trying to impress, i.e; the fans, could not identify the heroes wearing their colours.

And then there were the comments at the first major highlight in the game - a superbly taken try by the England winger Jonny May. He simply scooted around Conrad Smith and a couple of other All Blacks and gave a whoop and a holler as he scored. Some of my new Kiwi friends of a couple of days were derisive. 'Bloody soft try!' I heard and the like. There was simply no praise for what May had brilliantly achieved. It crossed my mind how loud the cheering would have been if such a try had have been scored by one of the All Blacks!

I was really pleased that Sonny Bill Williams went so well and that the coaches gave him the 'full 80' on the field. SBW seemed to relish it and might have scored a try right in front of us if only he hadn't slipped after a wonderful bursting break.

The point that Steve Hansen made to the press afterwards seemed valid. The crowd (a record 82,223) seemed to scream blue-murder if they sensed England had been wronged. Was it a coincidence that suddenly the referee Nigel Owens would then be drawing the TMO sign in the air and replays would appear, over and over, on the big screen. The crowd screamed no such protest when it was England who were getting a questionable decision going their way. Hmmmm...

In the end the All Blacks could take tremendous satisfaction in their victory. It was tough, tough all the way though when the rain came tumbling down it leveled things out just when New Zealand were spinning the ball at high speed at making the big men of England struggle to keep up. If it had stayed dry maybe the margin for the All Blacks might have been wider.

The whimsy in me had hoped that after Beauden Barrett had kicked a penalty and the score stood at 19-14 that such a score would have been appropriate given the commemorations of the week. But 24-21 was good too though for the life of me, with the distance and murk being what it was at the end, I had no idea of having an opinion of why England had been awarded a late penalty try..

My pre-match prediction of 35-16 to New Zealand was wide of the mark but one lady in our group, Evelyn Wright, let out a mighty squeal at the end (right in my ear Evelyn!). She had picked 24-21 to the All Blacks and so was 40 quid richer.

Good on her - and good on the All Blacks for a solidly taken victory today. That's two games played (the one in Chicago remember which our group had not attended) and two good wins!


And three new All Black caps; Connor, Wolfe and McKay conjure up a try in the very first minute in the first test at Auckland!