You are here: Home » Two Media Buggers Squabble over something said 20 years ago; Here's my Version of the story...

Two Media Buggers Squabble over something said 20 years ago; Here's my Version of the story... 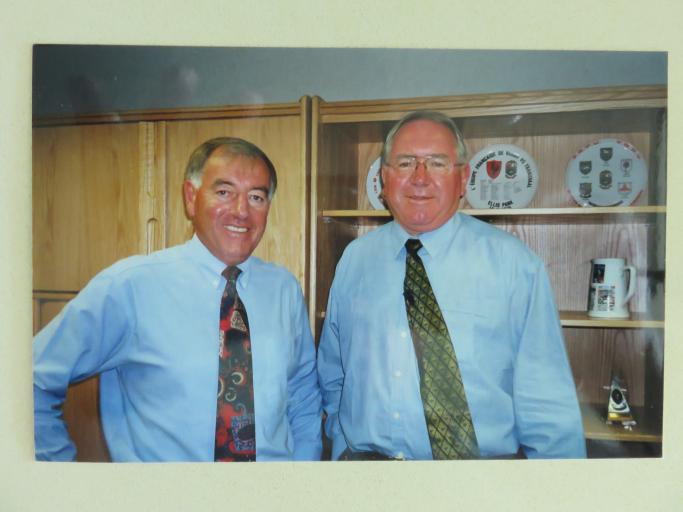 It hardly looks like Laurie Mains is talking to the 'Leader of the anti-Mains Camp' as outlined in Phil Gifford's column (picture taken Ellis Park, Joburg 1999) (See full story in 'News Archive Here')

In this day and age all of us must take compliments where we can. Most of the time they are very hard to come by. That is why I take a recent small newspaper comment by veteran Auckland sportswriter and author Phil Gifford about views I had apparently held a long time ago as a warm and hearty accolade. That's even though he himself would not be thinking what he wrote was a compliment. More like a stinging barb.

What Phil did in a recent edition of his regular Sunday Star-Times column was to hark back to my work on TV and in print, but from not five or 10 years ago. He went back 20 years!

My first reaction is to say, “How wonderful that anyone could recall any attitudes I might have publicly expressed from that far back in time.”

The comment which I am taking as a compliment came in Phil's column headed “Four tips on how to win the Rugby World Cup”.  The sub-heading  was “There are many pitfalls to avoid”.

In it he basically outlined how he felt New Zealand as a country must attend to certain disciplines of support for the All Blacks or else this year's All Black defence of the William Webb Ellis Cup would sadly fail.

Under the second of his four “How to Win...” categories, Phil wrote a curious sentence: ''Contrary to the anti-Laurie Mains camp, led in this country by Keith Quinn, the majority of the [All Black] players who went into the 1995 [World Cup final] against South Africa had genuinely been smitten with food poisoning...”

Now while I am, with tongue firmly in cheek, taking that as a compliment – I have to say in all honesty that such a comment is very strange indeed.

For a start, mentioning my name in a story about something that happened 20 years ago was at the very least superfluous, and if I'm not very mistaken, was actually not very pertinent to the point Phil was trying to make about the 2015 All Black team's winning chances.

And really, I have to wonder all these years later:  did I have that kind of power over the New Zealand rugby scene in 1995?

But apparently any commentary I might have made back then about Laurie Mains as the All Black coach has burned itself so deeply into Phil's recollection and clarity of recall that it is the only thing he can think of and hark back to from any reporter or broadcaster from that time.

It is true that when he was coach of the All Blacks from 1992-96, I felt Laurie was difficult and rather uptight in his dealings with pretty well all news media. I always thought that it was a case of, “Yes, he's a tough bastard, but with me and pretty well every other regular reporter on tour”. Some writers even took to calling him “lugubrious Laurie” in print. Funnily, I never did.

While I thought Laurie could be difficult to work with, in fact, fair enough, he gave as good as he got. I know he always felt I was 'aligned' with those people who thought John Hart should have coached the All Blacks in that 1992-96 time. If I was, I was certainly not alone in that belief.

One time when I was walking into Lancaster Park for a test match, Laurie, also there with his wife, approached me and asked me for my home fax number. He said he wanted to sue me for remarks I had made on national radio about him that day.

My radio comments on that occasion were about confusion I felt there was about the alleged food poisoning of the All Blacks before the Rugby World Cup final in Johannesburg in 1995. Laurie was the coach of that team.

The team had not played to their best in a very tough final that South Africa won in extra time 15-12.

At issue was this:  were the players “poisoned” beforehand by food they had eaten, served or interfered with by a hotel worker called Suzy? Had such a woman ever even existed?

I had heard both sides of that most controversial issue and was confused and unclear. In 1999 when TVNZ invited me to front and write the six-part series called Legends of the All Blacks, I went back to the Sandton Hotel in Johannesburg, where the team had stayed. The TV crew and I made inquiries there about the alleged food incident.

On that trip I also interviewed… wait for it - Laurie Mains himself at Ellis Park. He lived in Jo’burg then while on a coaching stint with Transvaal.

By then, with the pressures of the All Black coaching job off his shoulders Laurie was cordial and even charming towards me (as he has been in the occasional times we have met in all the years since).

In the video interview we recorded in 1999 he did say that he knew nothing of a woman called Suzy and that reference to her “should not have appeared in my biography”.

I felt he was as confused as we all were over the whole issue.

In the end, in all my writing and broadcasting about that story – and it was a huge story at the time - I drew the conclusion that there was no evidence whatsoever that a woman called Suzy had deliberately poisoned New Zealand team members.

I concluded that yes, some members of the squad had caught some type of stomach bug, which could have been called food poisoning, but that there has never, ever, ever any definite evidence produced to say somebody intentionally “food poisoned” them.

(Incidentally, if you ever get the chance, listen to the warm commentary done, mostly by John Hart, but I was there too at the microphone in the minutes after that 1995 final. It was directed towards Laurie Mains and the beaten 1995 All Blacks as they waited exhausted for the presentation of their runners-up medals.)

But hey! Phil thinks that because of my expressions of doubt over the food-poisoning issue I must have “led the anti-Mains camp” in New Zealand in those turbulent rugby years.

To repeat, did I have that power? That influence on rugby history?

Of course I didn't.

Phil: in your column you were over-reaching, trying to justify reaching a conclusion that is simply wrong.  You were talking hogwash.

Footnote: It’s easy for Phil Gifford to rewrite rugby history and imply that only one reporter led an anti camp with regard to an All Black coach. But Phil is overlooking his own public disdain for John Hart when Hart was in charge of the All Blacks.

In fact, I might go so far as to say Phil Gifford led “the anti-Hart camp” in New Zealand rugby at that time!

One of South Africa’s greatest players, John Gainsford played in what was then a record number of internationals for a centre in the Springbok colours.

A big, strong-running centre with positive instincts for attack, he made his first-class debut as a 19-year-old, before joining the Junior Springboks for their 1959 tour of Argentina. He came into the South African test team in 1960, when he appeared in the only test against the Scotland touring team and in all four games the same season against the All Blacks. Thereafter, until 1967, only injury kept him out of test teams.

In his seven seasons as a Springbok, Gainsford earned world-wide respect. After only five years he became the highest-capped South African player, beating the old mark of 28 tests, held by Johan Claassen, in the third test at Christchurch on the 1965 New Zealand tour. This was a feat which he celebrated by scoring two brilliant tries as the Springboks came back from 5–16 at half-time to score a notable victory.

At the time of his retirement, after the 1967 tour by France, Gainsford was also South Africa’s top test try-scorer, with eight tries. Both his appearances and try tally records were broken in subsequent years, but it took until 2001 before Japie Mulder passed his record for being South Africa’s highest-capped centre.