You are here: Home » This Week: The 'All Mac' Rugby team- from All Black history - and a great team it is too!

This Week: The 'All Mac' Rugby team- from All Black history - and a great team it is too! 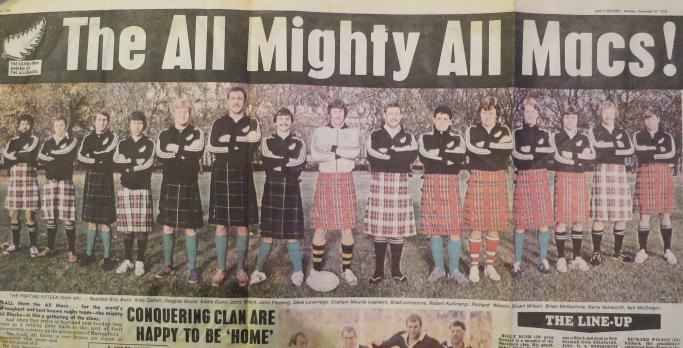 This was fun! In 1978 the 'Scottish Daily Record dressed their 'All Mac's' team selection. I suspect this clipping has not been seen since!'

As the 2014 All Black rugby team get ready for their clash with Scotland my mind goes back to 1978 when the 'Scottish Daily' record 'got the drop' on the rest of the newsmedia with this great wee yarn.

Somebody on the paper's staff must have looked at the names of the All Black team and with players in it with names like Ash McGregor, Brian McKechnie, Stuart Wilsoin, Richard Wilson and 'Duggie' Bruce and then and there it was suggested that it'd be worthwhile to further study if there were any others with strong Scottish lineage.

Indeed there was and soon no fewer than 15 players were proudly announcing they were 'part Scottish' and that their family heritage was there for all the world to see. See if you can identify the above team; and i will publish it down the bottom of the page here; The 'Scottish Daily Record' produced appropriate kilts and the great photo was taken. My copy only exists as a kept clipping from their newspaper.

Meantime there is another All Black team from Scottish history which has been pulled together on this trip from the supporters who are following the 2014 All Blacks around UK.

We're calling it a 'FULL' 'All Mac' team chosen from All Blacks with Scottish heritage.

Seeing as last week keithquinnrugby.com published the 'All Black-England XV' which was made up of players with English-sounding name backgrounds here  nowis the main "All Black-All Mac" team from AB history. And what fun it was us to come up with these names for you

It will be interesting to see how many 2014 All Blacks have surnames which suggest Scottish forebears.. Many less in 2014 I suppose.

The only rule was the players had to be in their correct playing positions and players were listed not necessarily by talent, only in the order they were called out. This selection took about four minutes for my bus to complete!

All good names - and many more for you to toss around yourselves - in those moment before kickoff!!

New Zealand's sevens team had won four gold medals in a row from 1998-2010 but on this day at Glasgow in the final New Zealand fell to Kyle Brown's South Africam by 19-12. A great rugby era had ended.

William Wavell Wakefield was a highly successful player, thinker, innovator and captain. He became one of the world game’s best administrators, becoming an England committeeman before rising to be president of the Rugby Football Union in 1950. He served as a delegate on the International Rugby Board for the seven years up until 1961 and wrote extensively about the game, in his later years becoming a symbol of wise counsel for amateur rugby and its future.

The young Wavell Wakefield was a supremely fit rugby player, winning his 31 international caps as a flanker, lock or No. 8. He first played for England in 1920, when a strong Welsh side thrashed him and 10 other new caps. The selectors persevered with many of the new players, and out of their rising confidence came one of England’s best eras.

The England team, with Wakefield, the brilliant halfbacks ‘Dave’ Davies and Cyril Kershaw, Cyril Lowe the wing, and forwards Tom Voyce and Ronald Cove-Smith, combined to win the Five Nations crown three times in the first four years of the 1920s.
Wakefield played his first 21 internationals consecutively, winning 17 times with one draw. By 1927, when he was hampered by injuries, the highly popular and respected ‘Wakers’ had reached 31 caps – an England record for any position and one that stood until 1969, when it was passed by D.P. ‘Budge’ Rogers.

Wakefield is often remembered as one of England’s best captains and tactical planners. As captain of Cambridge University and England, he insisted on each member of the forward pack undertaking set roles, rather than plodding together from set piece to set piece, as had been the style.

Under his leadership, England’s back row combinations became the first in the world to work together as a ‘team’, which is commonplace in modern times. Certainly he was highly successful. In his seven seasons in the England team he took part in three championship wins, three Triple Crowns and three Grand Slams. It is a tribute to him that those years came to be known in English rugby as the ‘Wakefield Era’.
After his active rugby days he was a Member of Parliament and then became the first Baron Wakefield of Kendal. He died in 1983.