You are here: Home » The Half-Term Report: The All Blacks Haven't Got out of 1st Gear Yet!

The Half-Term Report: The All Blacks Haven't Got out of 1st Gear Yet! 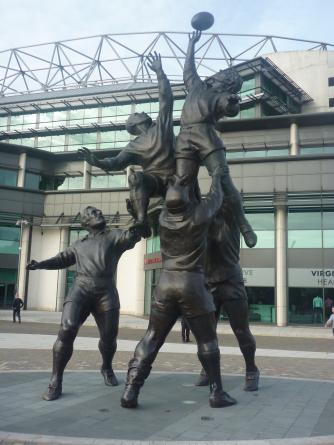 Twickenham in London where the All Blacks will head towards the 2015 Rugby World Cup on their late (2014) tour this year.

I watched Serena Williams play Caroline Wozniacki the other day in the women's final of the US Open tennis championship. Williams was trying to climb to a new total of 18 wins in Grand slam tournaments. And she did do it - but the alarming thing fpr the world game of tennis was that in such a major sporting moment in her year she didn't have to move into overdrive or fast forward or maximum exertion to succeed. The All Blacks this year are on a run which looking is a bit the same. Which raises the question; Is that a good thing?

Williams won comfortably in straight sets. I kind of feel the same about the 2014 All Blacks so far. Like Serena in her tennis year the All Blacks haven't won everything (the 12-12 draw with Australia in Sydney stopped that) but they confortably retain the number one ranking in the world. No one is really challenging them. The 12-all draw the All Blacks suffered was exposed a week later as an aberration to say the least (it was followed by a 51-20 win in Auckland to McCaw's team)

But yet there is always plenty to talk about concerning the All Blacks. It's the way we are in New Zealand. They are 'our team' but there are so many aspects we always like to question mark and query. So, seeing my opinion is at least as valid as the next man's in the bar, the backyard or on the bus, here I go with mine;

September 2014 sees the one-year-to-go signpost go up around the world. So that raises questions. Are we in good shape to defend the famous trophy?

Overall you'd have to say 'yes, we're OK' but in some areas there are concerns which might turn into our greatest fears.

LET'S LOOK AT THE PLAYERS:

Israel Dagg - he is not as electric as he was. He must sharpen up or else Ben Smith has to be back there as number 1 choice. To be fair the games I have seen Dagg play in recent weeks have been in the rain - noyt always a good place for an outer back to shine.

Ben Smith - Love this guy. Runs like the wind; he has great intuition running forward about how to get through the gaps. And he feeds others in sweeping moves unselfishly at all times.

Cory Jane - Not the same since he crocked his leg last year. His pace is not electric anymore. The tries he scored at Eden Park look good but he is 'over the hump' in his career I'm afraid.

Julian Savea; One of the most markedly improved players in the world. Last year I feared he was good but the very top level might elude him. I thought he had a chink - that he couldn't kick. But now this season, at least with the kick and chase he has perfected, he has developed a further winger's weapon to now send him down the road towards greatness. Cory Jane was once on that same road but for him now reaching that goal seems out of reach.

Ma'a Nonu - One of my all-time favourites of the modern All Black story. Is it my imagination though that his best rugby is now behind him? He is not playing with the absolute authority of yore. To often his talent is overwritten by dumb charges outside the law. But good luck to him for the battles ahead trying to regain his best touches.

Ryan Crotty - You've got to like the cut of this man's jib and also his beard. While perhaps not being a first pick he is a solid man to have around to perhaps always be there off the bench.

Beauden Barrett - Neat, nice, tidy and brilliant at times. Now where have I heard that before? The problem Coach Steve Hansen has is a good one. Whichever he picks as his first-five he has a good one. And Hansen has it correct. Start with Cruden and finish with Barrett off the bench. That many not go down too well in New Plymouth but for the All Blacks it is best. Cruden is solid and aggressive at the start of a game. Then Barrett's brilliance comes in as a real boost when the opposition are sagging in the last quarter. They're the perfect mix at the moment.

Colin Slade - Definitely the third pick for first-five but as good one if anyone ahead falls over.

Daniel Carter - Not seen in the test scene yet but he cannot be out of the mix Surely. Maybe when he comes back he will venture towards the number 12 jersey?

Aaron Smith - Another really big halfback improver but why oh why does he diminish his stature during a game by repeatedly raising his palms upwards in pleas to the referees to award penalties. The Pom halfbacks used to all do that and we hated it when we saw it. Take that arrogant angle out of your game Smithy and you will be a better man.

Tawera Kerr-Barlow and T.J.Perenara - good players both but the gap to Aaron Smith is significant. A slight worry this a year out from the World Cup?

Kieran Read - In all aspects of the game of All Black rugby this year he is a leader. I bet Messrs Hansen and McCaw are very pleased to have him around. I once wrote a piece and based it on a dream I (never actually) had (but said I'd had it!). It told of Read holding up the Rugby World Cup in triumph after the final in Twickenham in 2015! Richie McCaw was taking lots of hits and suffering concussion when I wrote the piece. And he didn't make it to the competition. If that nightmare was to happen then Read would be excellent to take over.

Richie McCaw - Not that I want McCaw out of it. Far from it - but he is still taking hits from the hard men of opposing teams. To the point where you wonder still whether he can hold together. I hope so. This year I admire McCaw most so far for his outright toughness on the field. He is amazing to come back repeatedly to make his mark from the hits he takes.

Jerome Kaino, Liam Messam and Stephen Luatua - The blindside flank position is still very much up for grabs. Messam has fallen back a bit with some recent handling lapses but just when you're about to suggest he gets the 'heave ho' from the team he scores a great try and you can see again why he is in the squad. Kaino and Luatua have to regain full fitness before they can be finally judged.

Brodie Retallick and Sam Whitelock - A great complimentary locking pair. I did have doubts about Retalick a year back but not now. And Whitelock is the goods. His shorts get pulled around in all the ruck and maul tussles he has and his lucky stripey undies are always exposed. Good stuff! They are a great pair - like Pinetree and Stan Meads were all those years ago.

Jeremy Thrush - Came on v Argentina and got stuck right in. It looks like those years in waiting are about to pay off with some longevity in the team.

Wyatt Crockett and Owen Franks (followed by Ben Franks and Charlie Faumuina) - all doing great work in the tough, murky world of the front tow. From my seat in the stands and the TV lounge I can never work those guys out. But our scrum is at least holding its own so in the dark they must be doing a good job don't you think? Both our on-field props also do great things as tacklers.

Dane Coles - another of the really big improvers from the very high hooking and loose play standards he has set in recent years. This hooker is so good the TV commentator Grant Nisbett claims him (as a fellow Poneke clubman) but so do I (Coles also went, as I did many moons ago, to Wellington College). That's how much we like him now.

Keven Mealamu - which leaves this position as a serious worry. Old 'Kevvie' has done great service dating back to 2002 but he will be 36 when the next World Cup kicks in. That's far too old - so the selectors have to find a solid back up for Coles in the number 2 jersey. Even if it has to be one of the props (one of the Franks?) who is re-trained to do the job. But then again I reckon they'll stick with Kevvie. (I bet he votes for Winston Peters in the New Zealand election - to confirm he'll get the Super Gold Card soonest - he'll still probably be in the team when he's 65!)

REMAINING GAMES FOR THE ALL BLACKS IN 2014:

Every day there is Rugby History 29 November 1924

Click to show 'It was one point for every year we had waited!'


The All Blacks beat Wales 19-0 in Swansea; with, they said, one point scored for every year they had waited to avenge Wales's controversial 3-0 win in 1905.

At the age of 12, in 1893, Rhys Gabe walked from his home near Llanelli to watch Wales play Ireland at Stradey Park, a distance of five miles. He and his friends played with a rugby ball all the way there and back, and the game had a profound influence on young Gabe. Thereafter he only wanted to be a centre and based his play on his hero who had played that day, Sam Lee of Ireland.

Gabe made his debut for Wales in 1901 against Ireland at Swansea in a match that marked the last appearance of the great Billy Bancroft for Wales.

Gabe, as a centre capable of beating his opposites with deception and speed, was a brilliant player in the Welsh teams which won the Triple Crown in 1902, 1905 and 1908, and which enjoyed a period of success called Wales’s first ‘golden era’. He also toured New Zealand with the Great Britain team of 1904.

It was Rhys Gabe who made the run that led to Teddy Morgan’s try which enabled Wales to beat the 1905 All Blacks. He also took part in the famous ‘foggy’ game of 1908 when Wales beat England by 28–18. Gabe scored twice that day – one of the tries was not seen by the England defence because of the murky weather.

There is another story that Gabe was kicked so hard in the backside in the Wales v Scotland game in 1905 that he could not sit down for six months! Being a schoolmaster it meant he had to conduct his lessons standing on his feet. However, the records also actually show that he was fit enough to play in Wales’s next match just three weeks later!