You are here: Home » The Amazing Whitelock connections 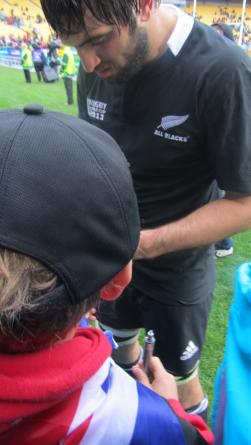 All Black Sam Whitelock signs for a young fan.

This Just In; May 2014; Of course you could say it was 'logical' that Adam Whitelock would go on to become an All Black. Yes he has great form and talent in the 15 aside game. He has shown that for years. But those same skills meant it was only right and rational that Sir Gordon Tietjens would eventually use them and put Adam into his 'Sevens All Blacks' for the last two tournaments of the 2014 IRB World Sevens Series.

Whitelock looked totally at ease in the new game for him at international level playing a significant part in New Zealand's sevens team winning so well in Glasgow, beating Canada 54-7 in the final.

Whitelock is one of the four famous Canterbury and Crusaders rugby players who are brothers. But they are part of a rugby family stock which is generations old, is very impressive and goes a long way to explaining the ongoing rugby talent.

Let's take this one step at a time. Back in North Canterbury in the years after the war, a battle-scarred soldier returned home. His name was George Nelson Dalzell. And he was a tough bugger who had seen the horrors of war. Indeed during a 3rd New Zealand infantry division landing at Guadalcanal in a Pacific 'hell-hole' Dalzell was blown into the air and severely injured from an exploding Japanese shell. The wound in his leg was so grave there was serious talk from the medics on hand that the leg should be amputated. The immensely strong sheep farmer Dalzell said 'no way' - and that was the end of story though his hospital convalescence lasted two painful years.

The wound left him with a hole in his leg that was ghastly to look upon and surely, said his friends when he finally got home, it would be so severe that he would never play his beloved rugby again. But Dalzell did, always for the Culverden Club, in North Canterbury.

Before each game teammates would see Dalzell packing what was essentially a hole in his leg with wadding and then taping a shin guard into place. Nothing more would be said about the injury as Dalzell then charged about the field.

Did he have ambitions to go higher in the game than club level? Maybe he didn't but soon the Canterbury rep selectors came calling.

His first games in the red and black were in 1948 and there were more regular and consistent appearances as the next few seasons rolled by. His locking partnership with the future All Black captain Bob Duff became legendary. It was said that the Canterbury scrum never moved backwards when those two were in place.

Those were the days when young men usually saw the age of 30 years as being the best time for retiring from actively playing rugby. Then it was deemed the best time to move into one's work and family career. Dalzell never quite saw it that way. The 1953-54 All Black tour loomed ahead and he had his eye on it.

Sure enough, at the age of 32, unheard as a debutante's age, Nelson Dalzell made the 6 month tour to Britain, Ireland and France with the All Blacks. Others were left to run the sheep farm while he was away.

It is true to say Dalzell made the most of his one All Black experience. His work rate on tour was amazing. He was never bettered by any opponent and he quickly forged a new power locking combination with the great Richard 'Tiny' White of Poverty Bay. The captain of that team was another Canterbury man, Bob Stuart.

Also 32 years old Stuart looked to the 'senior' men of the team to assist him in the tough tour passage. He got exactly that from the two war vets in the second row.

Stuart told me once, and sadly these days it might not be deemed PC to have used such a description, that on that tour it was, said Stuart, 'always great to run to a new scrum and see from my number eight position, ahead of me these two beautiful big bums of White and Dalzell, waiting there for me to put my head down between them and push up against their bony backsides!'

Rugby men will understand the clarity of that portrayal even if others don't!

Dalzell played in all five tests on the tour and in 22 of the 35 games. He was tough and uncompromising. 'Up the Centre' they nicknamed him for the direct way he played the game. Others called him 'Dazzle' or 'Dad' for the fatherly way he went about enjoying all around him. But at the end of the tour, that was that - family and farm now definitely beckoned.

Nelson Dalzell and his wife Shirley raised a fine family and from them the next connections in rugby come through. Shirley's maiden name was Elsom and if you know your All Black stories, you'll know that she was the sister of Allan Elsom who was also an All Black on the long tour of 1953. The marriage therefore made the old teammates also brothers-in-law!

Both of Nelson's and Shirley's sons played for Culverden of course and Anthony had 28 games for Canterbury. As a lock forward of course.

Of the Dalzell daughters one married Graeme Higginson, who was a hard case All Black in the 1980s while still another daughter was also attracted to a lock forward; a young farming student called Braeden Whitelock. It is from that marriage that the four current Whitelocks (of a third generation) have carried the bloodlines on further.

Braeden Whitelock was a Culverden player too and in fact locked the scrum with Higginson briefly for the club in 1979. As a 20-year old Whitelock made the New Zealand Colts out of Culverden and then having headed home had a long tenure with Manawatu. This writer recalls him as a tough uncompromising lock forward in, may I say, a 'Culverden' style , possibly dating back to the way Nelson Dalzell played in the club's colours.

All of the sons of the Whitelock rugby link were born in Palmerston North. Braeden is a farmer near Opiki on the outskirts of that city.

The four boys arrived in the order of George first , then came Adam, Sam and finally Luke.

The order of rising to make the All Blacks' status has not quite followed the order of birth.

George was the first to break through; after being a reserve who was not used v France in Wellington in 2009 he had one test match as a replacement v Italy a week later in Christchurch in 2009, scoring a try in his industrious 30 minutes on the field. Sadly for George his rugby at the top level has been 'only' at Canterbury and Crusaders level. The All Black selectors haven't come calling since.

Sam was next to make full international status. At 2metres 04 (6feet 8inches) has been a regular since his arrival in the team squad in 2010. By the end of 2013 he had totalled 51 internationals, his fiftieth coming on Twickenham against England. He was big part of the success of the All Blacks in their 2011 victory in the final over France.

Earlier on the same tour on 2013 baby Luke Whitelock, as a number eight forward had made his test debut,. His was like his oldest brother George, only being used as a replacement for 20 minutes of play versus Japan in 2013.

So now it is Adam Whitelock who can claim 'All Black' next to his name. Sure, there are those in New Zealand's rugby community who downgrade the sevens somewhat but the NZRU now has given full approval for the 'A.B' nomenclature to be used next to the Sevens players. Therefore Adam has the illustrious status too, well won by himself.

And well done for him keeping on a long and illustrious family's connection to New Zeakand 's national game. I met Nelson Dalzell once and he was a quiet, genuine looking man. Well done to he and his wife for starting a rugby 'Dynasty' and keeping it going so well in the years ahead.

[PS: ...and so it goes on. Next time you're watching The Crusaders and hooker Ben Funnell runs out to play for Canterbury or The Crusaders, you can amaze your family or friends by saying; "See that Funnell? He is another of the family lineage which includes the Whitelock brothers - and dates back to George Nelson Dalzell - the Culverden Sheep farmer!]

In fact Ben Funnell's mother is the sister of Braeden Whitelock's wife so the bloodline to Dalzell might be thinning somewhat - but this wbsite says "never let the facts get in the way of a warm family story!'. The facts are Ben Funnell is a full cousin of the Whitelocks - and the are farming neighbours back home in Linton and Opiki in Manawatu!]

Further note; And still the sporting connection goes on with this remarkable New Zealand sporting family. In December 2013 George Whitelock married Kayla Sharland. The new Mrs Whitelock has attended three Olympic and three Commonwealth Games as a star New Zealand field hockey player. To the end of the 2014 Commonwealth Games she had played in 213 full internationals for the 'Black Ferns.'

Every day there is Rugby History 20 August 2014

They did it in style too; beating Canada 38-10 to win a Youth Olympic Gold medal in Nanjing China. The victory saw an Olympic rugby gold medal presented for the first time in 90 years!

Fred Allen was one of the truly giant personalities of New Zealand rugby in the 30 years after the end of World War II. After being ﬁrst recognised as a star of the famous New Zealand Army team (the Kiwis) which toured Britain in 1945–46, he gained selection and the captaincy of his country in 1946. He was also made captain for two All Black tours, to Australia in 1947 and to South Africa in 1949, though he was dropped – at his own behest – for the ﬁnal two tests in 1949.

After his playing days were over, Allen continued to make a remarkable contribution to New Zealand rugby.

He became coach of the Auckland team and took it through one of the province’s greatest eras. Under Allen’s guidance, Auckland defended the Ranfurly Shield 25 times, then a record, between 1960–63.

From 1964 Allen progressed to selecting and coaching All Black teams. He and Charlie Saxton, his captain from the Kiwis 20 years before, formed a formidable managerial team behind the 1967 All Blacks in Great Britain. That side was unbeaten and is remembered as one of the best international teams to have visited Britain.

He retired as All Black coach in 1968 having had team which played in 37 games for 36 wins.

In his later years Allen continued to be a highly respected and recognisable personality in the game in New Zealand. He was knighted in 2010 and died in 2012, aged 92.

Which club supplied seven players of the 1971 British and Irish Lions touring team to New Zealand - five of whom played all four tests?