You are here: Home » Nanjing's Sporting Hope put into a Horror Historical Context 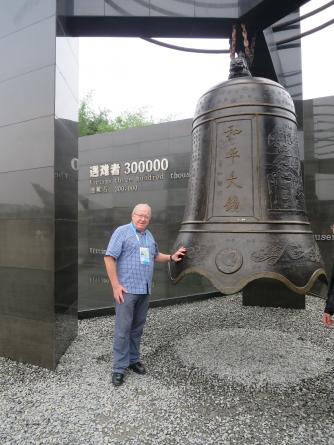 One picture I can show of a sobering visit to the Nanjing Massacre Memorial Hall.

A rainy Sunday in Nanjing and I wasn't starting my work day here at the 2nd Summer Youth Olympic Games here till early afternoon. That meant there was time for my good mate, the British commentator John Burgess and I to head out on a sightseeing trip. Did I say sightseeing? That word hints at visiting fun tourist attractions with lively sights to see. But this morning's trip was anything but...

What we went to understand for ourselves was the Nanjing Massacre Memorial Hall which is, according to the hand-out pamphlets, 'a memory to the most heartbreaking chapter in this city's history.' And my word it is just that.

If you know your history you know the story. Over a period of six weeks in late 1937 the then Chinese capital city of Nanjing (then called Nanking) was attacked by Japanese invaders. What followed was not an occupancy but is accepted here as a massacre, the likes of which makes it one of the worst ever atrocities in global history.  It might have gone unnoticed in historical significance but for one German John Rabe who wrote a diary of the revulsion which went out to the wider world, called 'The Rape of Nanking.'

The invaders systematically attacked local residents as they went about their daily business and in just weeks a series of mass-murders, beheadings, live burnings, lootings, burials of live humans and mass-rapes took place. No one quite knows how many died but all around the grim monument we visited today the number 300,000 was posted in large letters. That many are estimated to have fallen victim.

The museum was modern, well organised and deeply affecting. It was also very well supported by the local public today. We visited on a Sunday and had to queue in the rain to get in. As one slowly approaches the entrance a series of sculptures are passed, depicting the horror and terror the people and its city suffered. And once inside we had to jockey our way through pressing crowds.

I noted two things; there were kids there of all ages - and the taking of photographs of the horror displays were not stopped in any way. I snapped off dozens of pics myself and bought a commemorative  book. But they will be probably be only looked at by myself in the future. I cannot imagine ever wanting to say to anyone in my family or friends, 'oh, can I show you my Nanjing Massacre shots?' I suspect my friend John will be the same.

They will instead become a personal reminder of witnessing one of the worst examples of man's inhumanity to man.

A couple more things from the visit; the first was the seeming fairness of the displays we were seeing at the museum. It is not a place which points a stabbing, bloody finger at Japan to remind the locals of the peril that ravaged their city nearly 80 years ago; as if to keep their feelings boiling.

Far from it, the museum seemed to take a down-the-middle stance and just presented facts, graphic though they were, of those terror times. I looked at the little kids here today, walking through quietly with their parents and wondered what the children were being told as each display of revulsion was passed. No doubt every family which has a long history of living in this city would have lost at least one member, and probably many more, in the disgust of the historical chapter. The whole thing was one of the most moving experiences I have ever had.

And then, quite by coincidence after John and I had started work on a late shift of commentary, there was a reminder of Olympic hope for the future presented right in front of me.

Along with an Australian Peter Blackburn and a South African Duane Dell'oca we were the commentators for a couple of finals at the China Tennis Academy.

In the last of the tournament's week a young man by the name of Jampei Yamasaki played off in the mixed doubles final's gold medal match with his partner Ye Quiyu (pronounced 'Yer Kway Yoo'). Here was a Japanese male playing together in a sporting contest with a young Chinese woman as his partner; surely that should be seen as a very significant way to look to the future now with optimism. Say what you like about them but the Olympic Games movement in particular is doing great things to encourage a global togetherness via their Summer Youth Olympic event.

As it turned out Yamasaki and Ye did not win; in a very tight final they lost to a European pair of Jan Zielinski and Jill Teichmann. (Mind you I guess we could have drawn historical connections over the winner's two countries too -Switzerland and Poland).

For me though I had hoped the Asian pair would have prevailed in the match, even if it was just to be a personal reminder today that the world has moved on physically from the revulsion from the past, if not ever totally from the memories.

Every day there is Rugby History 14 January 1945

Click to show Born this day; A Southlander who played his last 4 games for the ABs in 4 positions.

Bob Barber ended his time with the All Blacks in Australia and Fiji; in his last four starting games he was no.8, flanker, lock and prop.

Players with the surnames of Jones, Williams and Thomas when added together made up how many players in the Welsh squad at the 2003 Rugby World Cup in Australia?