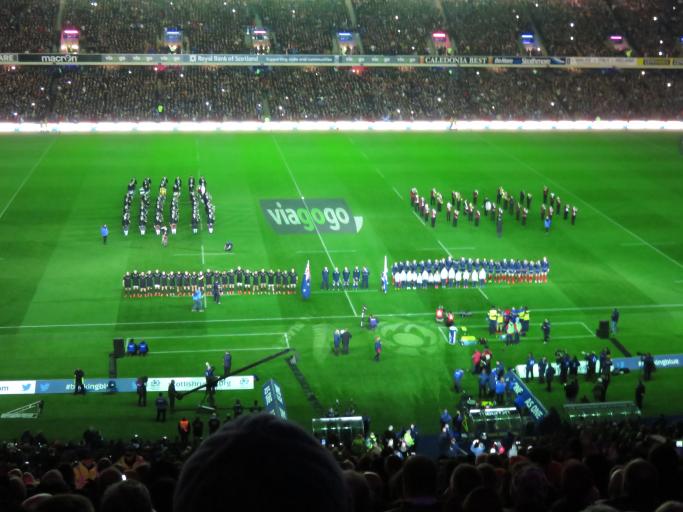 The great night scene at Edinburgh before the All Blacks v Scotland game on Saturday.

I've got to be honest here, in the touring All Black Supporter's bus I was in last Saturday in Edinburgh as we headed out to Murrayfield to see New Zealand play their rugby test against Scotland I told our people on the microphone that 'if Scotland are EVER going to beat the All Blacks then tonight's the night!'

I said it with much firmness! And I meant it too!

But moments later when someone handed me a clipboard and asked me to put a pound into the kitty and 'pick a score' I promptly wrote down 'All Blacks 41 Scotland 21.'

So I kinda thought New Zealand would win it OK - though there was that niggle in me that Scotland's team could be a downright nuisance in the game. They had won well the previous week against Argentina and their team was the same to play New Zealand.

But Scotland could not win it. It was a tough game, just like last week's at Twickenham, really - and this All Black team knows how to win it seems - whatever circumstances are thrown at them and whoever is playing in the black shirts (where one still can't see the numbers!).

But who could be satisfied at the bumbling, fumbling, effort of mixed messages which New Zealand put on?

Actually firstly, I blame the coach Steve Hansen. Yes, I know he has to give players in his party of 35+ who are all fit and keen, game time on the playing fields while they are here, otherwise they sit around and probably start to grumble and plot that he's a bastard for NOT giving them game time.

But on the other hand if you put out a team with 13 changes from the week before, with players out of position all over the park, how can they be expected to be fired up and looking like a team unit straight out of the sheds and into a test match?

Obviously they can't or couldn't against brave, fiery Scotland. That much was confirmed by the lack of cohesion, teamwork, and backs-forwards togetherness from the All Blacks from start to finish.

Scotland on the other hand played with 110% zest from start to finish. Their lineout was very impressive, the two Grey brothers (looking like Ben Nevis and Ben Lomond - two mountains), their scuttling loose men were very committed (including a former Wellington lad Ben Cowan playing the game of his life) and in a couple of other players, like the runaway try-scorer Tommy Seymour and fly half Finn Russell, they had the best players on the field.

Of the All Blacks I liked Charles Piutau on one wing but was confused to see Colin Slade on the other. Someone told me Shaggy Hansen would be wanting to see how much of a 'utility' Slade really is. When sometimes Slade looked slow and uncomfortable was alarming to note.

But actually no other All Blacks impressed; and even some, like Dan Carter and T.J.Perenara close to the scrums, sometimes were way short of a good international standard.

Sad to say that eh? What is the future for both these men we may ask more and more in the weeks ahead. Especially as one is so young and the other so new.

Every day there is Rugby History 1 September 1928

The first All Black tour of South Africa is squared.
With South Africa leading the 4-match test series 2-1, NZ had to win this game in Cape Town. They did by 13-5.

Players with the surnames of Jones, Williams and Thomas when added together made up how many players in the Welsh squad at the 2003 Rugby World Cup in Australia?