You are here: Home » Isn't THIS a Better Way to Accept Defeat?

Isn't THIS a Better Way to Accept Defeat? 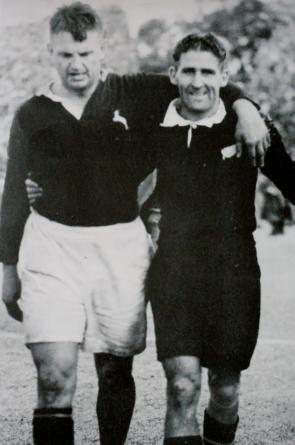 John Roughan in the New Zealand Herald recently wondered if the All Blacks of today have lost the art of losing gracefully. The great Fred Allen was a hard man who drove his team's hard for test wins. Nothing else mattered but to win. His teams played tough for 80 minutes. Yet see how he lost so generously here in 1949 - with the South African captain Felix du Plessis. And Fred's team lost all four tests in a row on that tour!

The great Colin Meads plays his last game for his country on this day.
His career as an All Black had lasted 15 seasons inclusive 1957-71. It ended leading NZ to a 14-14 draw again the British and Irish Lions at Eden Park.

A hard-nosed loose forward, Dawie Ackermann, described by one South African writer as ‘symmetrically built’, was at his very best as a ﬂanker in the three tests he played against the 1955 British Lions team and in two tests against the All Blacks in 1956. After being part of the Springbok team which surprisingly lost to the French XV in 1958, he was no longer required by the South African selectors.

In his frustration Dawie Ackermann turned to the ﬂedgling sport of rugby league and he is remembered as the captain of South Africa’s ﬁrst (and only) touring league team in 1963. The tour to Australia and New Zealand was not a success (even though the South Africans beat New Zealand) and Ackermann and league did not re-surface in South Africa.