You are here: Home » Does USA still have THIS far to go in its rugby hopes v New Zealand?

Does USA still have THIS far to go in its rugby hopes v New Zealand? 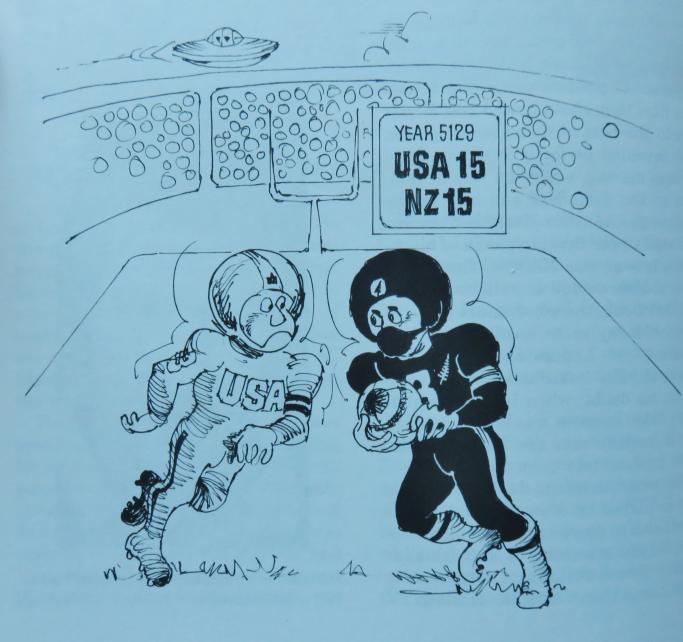 According to one great cartoon from over 30 years ago....progress has been slow for USA rugby in their hopes of ever beating the All Blacks. Check this version out here.

When working for TVNZ in 1986 I wrote a book called 'New Zealand Sporting Disasters, Disappointments and Curiosities.' It did quite well and was reprinted six years later. The cartoons in it were the brilliant work of George Martin. I tried to write in a humorous way about some of the 'shockers' New Zealand sport had had over the years. Working upstairs then in the art department at the Avalon TV complex was George Martin, himself a man with a brilliant sports playing pedigree. I commissioned the ideas for the cartoons for the book and George brought them to life superbly.

This one here came when I wrote, as a 'Curiosity' about the All Blacks rugby team playing USA at Berkeley, California in 1913 and winning by 51-3 and then 77 years later the 1980 All Blacks went back to USA to San Diego and beat the Eagles by 53-6. I had kept a clipping from the 'Sports Illustrated' magazine who had sent one of their leading columnists out to see the game.

Dan Levin memorably wrote; 'The final score was All Blacks 53 USA Eagles 6, which was one point closer than the last time the two teams had met in 1913. On the scale of improvement shown by the USA in 1980 the United States can expect to draw a game against New Zealand in the year 5129!'

The quote became George Martin's vision of what the game of rugby might look like thousands of years into the future!

[Note; Since 1980 the All Blacks and USA have met one more time. In 1991 in Gloucester at the 2nd Rugby World Cup New Zealand won by 46-6. You would now perhaps have to do some more serious maths to work out what year it could be now re-calculated that USA would get a draw!]

Jean-Pierre Bastiat was first capped as a lock against Romania in 1969. Although he played his first 10 internationals as a second-rower, it was as a No. 8 that he made his formidable reputation as a hard man of French forward play in his time.
The 2 metres (6ft 6in) tall Bastiat was part of a thrilling French loose forward trio, with Jean-Pierre Rives and Jean-Claude Skrela. He could run as well, and was also the French goal-kicker in several games. Although injuries and unavailability disrupted his career, Bastiat became one of the most feared forwards of his day.
He was appointed the French captain in 1977–78, his last season. Under his leadership France won its first three championship games; so did Wales. When the two teams met at Cardiff Arms Park the Grand Slam was at stake. Sadly for Bastiat and France, Wales was too good and won 16–7.
In later years Bastiat became a French selector and in 2002 was still involved with the selection and coaching of the national team.