You are here: Home » A Visit to Dubai - A Wonderful Week.

A Visit to Dubai - A Wonderful Week. 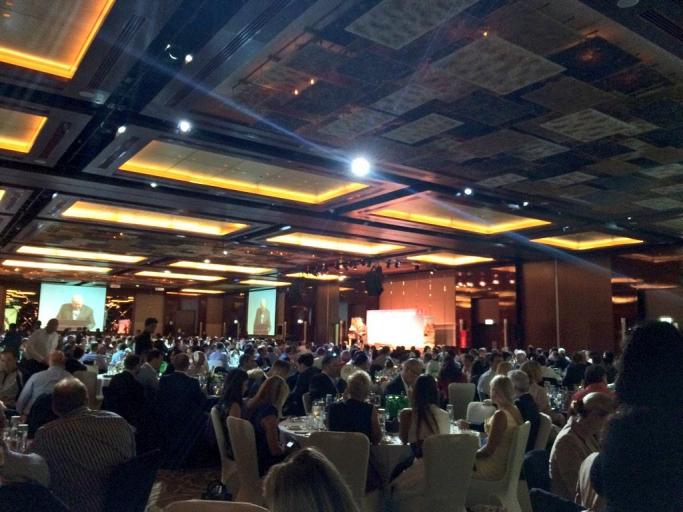 Somewhere on stage Keith Quinn is spinning his yarns. And captured on the big TV screens.

This website has been a bit quiet lately - but it returns with an in-depth report on a really enjoyable 'bucket-list' rugby experience.

The keithquinnrugby.com website reports it was an absolute pleasure to spend a week in Dubai in the United Arab Emirates recently and soak up that great Persian Gulf city and all it offers. My wife Anne and I spent some quality time there in the company of rugby people, some of them famous and some of them fans, we caught up with old friends, we sampled some great Kiwi hospitality which was still very real though far away from its place of birth and we took in some of Dubai's incredible tourist sites. And yes, there was some shopping done too!

The main purpose of my trip was an invitation, which had come to me from the marketing company Promosevens Sports Marketing, to speak at their famous  Emirates Airline Dubai 7s Rugby Long Lunch.  I was proud and delighted to accept - and so also were 800 other people on the day!

It was a swish affair, a promotion of the Emirates Airline Dubai Rugby Sevens tournament which will be staged in early December as part of the HSBC World Sevens Series.

The 'Long Lunch' this year really lived up to its name. After its midday beginning I did not wearily return to my hotel room until nearly 8pm!

I spoke first and I can tell you I was a little nervous to stand in front such a large throng of mostly British ex-pat men and women. However I immediately sensed that the global language of rugby was going to get me through, not with ease but with me trying to match the crowd's worldliness with stories of where the Game had brought me from in New Zealand and on through my adult career to mention some of the people I had met - and games I had seen.

The applause at the end I gratefully appreciated, the warm-hearted personal comments from strangers afterwards even more so.

The main speaker who followed was a true delight. He was the 77-test capped English and Lions scrumhalf and captain Matt Dawson. Matt has followed on from his playing career into a very public switch into the media and entertainment. With his wit and power of expression he is obviously very comfortable in his new life.

His tales of being in Strictly Come Dancing and Celebrity Master Chef along with regular appearances on the British TV version of  A Question of Sport (where he is a recurring team captain against cricketer Phil Tufnell) and also as a commentator and presenter on BBC Radio Five Live made him a big hit with the Dubai crowd.

While I liked all the backroom stories of life on TV and radio it was the stories of his time with the England rugby team as they won their way to glory in the 2003 World Cup in Australia, and of travelling with the British and Irish Lions on his three tours, which really resonated with this listener.

His best story I felt was of how the England squad huddled, leaned in and strained to hear the ultimate rousing words of their captain Martin Johnson as they waited on the field in Sydney for their Australian opponents to come out to play the 2003 Rugby World Cup final. His story was pricelessly told. Dawson had us all, as he and the other players had done on the day of their greatest sporting day, waiting breathlessly to hear which deeply chosen final words Johnson would use to inspire the Red Rose rugby men to charge onwards to victory.  Would it be Shakespearean? Or Dickensian or even Miltonic (a word I just invented!)

Instead, all that the fired-up Johnson could muster was a deep, jaw-dropping, growling, sneer to the world at large,  'Lads!,' he bellowed above 80,000 screaming Australian fans, 'fucking COME ON!!!'

Dawson did not offend anyone at the lunch with his directness of that expression. Instead those present roared their approval at being let into the inner circle with such a priceless (and historic) insight. We all loved it.

He had many other stories from life on the road and afterwards. His life these days in incredibly busy. Matt had arrived the night before the lunch and flew out at an early hour the next morning.

But not so the Quinn's. We had a much more leisurely departure. In fact nearly a week of being comfortably looked after continued. From the luxury of the 5-Star Crowne Plaza: Dubai - Festival City Hotel we moved across the city into the equally well-appointed home of Evelyn and Graham McNally (Well I thought so; Graham has a superb 'Man Cave' with a 60inch TV with a perfect HD picture! I was green with envy throughout our lovely stay)

On the day we arrived also staying at the home was Wayne Smith. The ex-All Black and World Cup winning assistant coach with his wife Trish were stopping off to catch up with the famous McNally hospitality. They were on their way to a coaching stint Wayne was heading to in Northern Italy.  Invited to dinner that night also was Gary Chapman and his wife Penny.

Gary is hugely significant in Dubai. He is the President Group Services, and Dnata (which is involved with Group cargo handling, catering and travel services) of the Emirates Airline Group, a very powerful figure in that massive global organisation (he is effectively second-in-command to Sheik Ahmed Bin Saeed Al-Maktoum  who is the chairman and chief executive of the Emirates Airline.) The great thing is that Gary remains sports crazy, with rugby and yachting in particular.He also remains in essence a Papatoetoe original who loves chewing the fat about all manner of sports and games at all levels.

(I can tell you that host McNally did a very wise Kiwi thing that night. Amazingly the dinner seating had all the blokes at one end of the dining room table and all of the women, delightful company though they were, seated at the other. It was a good move that, perhaps you might say, one mostly appreciated by the women?)

All of the 'arrangements' for dinner was typical though of Graham McNally. He is known to many hundreds of New Zealanders as one of the most loyal of All Black (and, sigh - Canterbury) rugby enthusiasts that the game has had, both at home and overseas. While working out of Dubai as an Emirates Airline pilot he and Evelyn have been a voracious fund-raisers for the local game and for various other Kiwi and Australian sports and social functions. The fact that his man-cave walls are covered with signed jerseys and memorabilia are testament to the many 'thank-you's'  he has earned from the great and good of the game. Graham was a brilliant MC of course for the Long Lunch!

At the home dinner Messrs Chapman and Smith were in great form with their many stories of the 2011 Rugby World Cup (Smithy's) and (Gary's) from the Emirates Airline Team New Zealand yachting series for the America's Cup last year in San Francisco. McNally and Quinn clung onto their every word!

So that was two nights of the best of Dubai - so far!  How am I doing?

Of course there was much more to come. On another night another couple of Kiwi rugby men Stan Wright, the ex-Hamilton and Wellington rugby referee and lately a big part of the UAE refereeing world and Dave Batterston, another airlines executive came to dinner with their wives. Once more the gender divisions were quietly and effectively put into place by the sensible host and hostess. There was way too much rugby gossip and news to catch up on down our end of the table!

We also journeyed out on a scorching afternoon to 'The Sevens' rugby stadium which is the headquarters of UAE rugby. There the CEO and Dubai 7s Rugby Director is an ex-Hawkes Bay man Jim Fitzsimons. With a sweep of his arms Jim explained how six gloriously green rugby fields are nurtured to be as  good in Dubai's heat as anywhere in the world. And in the coolness of the giant 'clubhouse' Jim  offered us more gracious rugby hospitality.

These New Zealanders, resident and hard-working in their lives are doing great things for rugby in the UAE. It was a pleasure to be in their company.

Soon enough it was time for the visitors to pack for the homewards journey via an Emirates A380 flight. We had had eight glorious days. Anne and I had also enjoyed unique experiences on a desert evening champagne dune tour complete with camel riding! (There are photographs - of the straining camel I mean!)  We also had a ride to the highest publicly accessed 124th floor of the world's tallest building, the 170-story Burj Khalifa; there was a slow drift down  the saltwater 'Creek' as it is called on a Dhow (the unique local boat), also a breathtaking flight experience on an Emirates Airline 777 simulator and yes, shopping at the world's largest Mall where there are, it so happens, 1200 shops (and Anne might have considered, but didn't thankfully, taking her revenge on any social oversights she and the other women might have taken at the dinner party's seating arrangements!)

This was a wonderful trip. We thank of course, the McNally's, still Kiwis through and through, where nothing was a problem for them to make our stay very, very enjoyable. And to Mr Chapman and his staff; to Donal Kilalea at Promosevens Sports marketing - and his personnel too. And to the new friends we met and the old ones re-visited.

Please Dubai people - I could tell you a whole of raft of other rugby stories should you ever consider inviting me again!

I'd be there in a flash.

Besides,  the poor camel which I had placed my ample frame on might have recovered by then as well!

Every day there is Rugby History 9 August 2014

Click to show Ouch! The Black Ferns tumble out of the Women's Rugby World Cup.

On this day New Zealand did beat USA 34-3 in Marcoussis, France but other results saw the Black Fern's great run at the previous four Rugby World Cups come to an end.

Physically one of the smallest players to ever appear regularly in international rugby, Gachassin was also a brilliant exponent of the best running skills of back play. He appeared for his country in four backline positions: first as a wing in 1961 and later as a fullback, centre and flyhalf.

Gachassin was only 1.62 metres tall (5 ft 4 ins), and weighed 63 kilograms (9 stone 12lbs). One journalist listed the following nicknames for Gachassin at one or another time in his career: the ‘Pocket Wing’, ‘Peter Pan’, the ‘Mighty Atom’, or the ‘Bagnères Flea’. Nevertheless, he was one of the most popular figures in French rugby in the 1960s.

His popularity has continued in the sport of tennis where he has been the President of French Tennis Federation for a number of years and is regularly seen sitting courtside at Roland Garros when the famous French Open tournament in played.