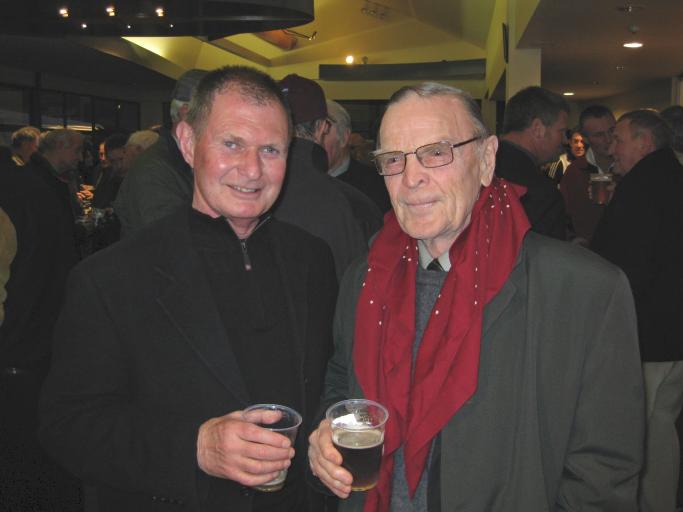 It is always very sad when a man who once thrilled New Zealand with his youthful rugby zeal and became an All Black, then reaches his senior years - and then passes away. This week we say RIP to Peter 'Sammy' Henderson.

Peter was a winger who came originally from Gisborne and attended Gisborne Boys High School for his senior years. He was shortish in stature but very quick and his first reputation in sport came as a track sprinter. He won the New Zealand 100 yards title in 1949, and by then his speed had translated onto the rugby field as well.  As a 22 year old he was chosen for the 1949 All Black tour of South Africa. He did very well on the hard grounds there; he led the All Black try-scoring lists.

He was so quick he made the New Zealand athletics squad which competed in the 1950 Empire Games in Auckland. He ran 5th in the 100 yards final and also ran in the 220 yards. He won a bronze medal for his country in the 4 x 110 yards relay.

In his hugely significant year of 1950 Peter appeared for the All Blacks again in three of the four tests against the touring British Lions team. Maybe it was from Lions players themselves but Peter was then the target for English rugby league scouts. He switched to the 13-man code in late 1950 and began a highly successful time with Huddersfield RLC. He played until 1957 notching up 258 games and scoring 214 tries.

Wikipedia tells us "Henderson had lost his job (as a dental technician)while playing for the All Blacks in South Africa, so he announced he was headed to England to play in the professional league at the end of 1950. It was then that the Rugby Union banned him from union, a ban which lasted 38 years. He had signed with Huddersfield where he stayed for seven years.

(The deal netted him £5500 in total fees over seven years for Huddersfield. In addition, he could earn about £1500 a year in bonuses. As an indication of what that would be worth today, Henderson told the New Zealand Herald in 2006 that he and his wife Leonie were then able to buy a two storey, three-bedroom house in England for just £1500.)

Wikipedia continues; "Peter Henderson played right wing in Huddersfield's famous 15-10 victory over St Helens in the 1952-53 Challenge Cup final at Wembley Stadium (in front of 95,000). He also played for the 'Other Internationals' side which won the 1953 tri-nations test series against England and France."

"He was both a courageous and pacy player who for most of his life was always known by the nickname, "Sammy". This was bestowed on him by team-mate Des Christian on the 1949 tour of South Africa because of his tendency to to score tries by diving at the line. At the time American Sammy Lee was the world's best known springboard diver.

"Yet if Henderson has a special niche in New Zealand rugby it is not so much for his considerable playing ability but more the battle he had with the game's hierarchy in gaining reinstatement to union from league.

"It sounds petty today, especially with rugby's movement to professionalism and the ready and easy switch now by players from league to rugby. But Henderson despite having the support of his old team-mates and of his club in Wanganui, Kaierau, was given a frustrating time from the game's leading administrators who were determined to ostracise Henderson and other players like him who had gone to league.

"Eventually, with rugby at long last adopting an enlightened view at the highest levels, Henderson was reinstated officially in 1989. He always emphasised in his battles with officialdom that he had no ulterior motives other than to return to the game which for all his years in league had remained his first love."

It was rumoured (strongly?) that the quiet, reserved and dignified Henderson had little time for amateur New Zealand rugby officials. As an aside this writer asks; Who can blame him?

Broadcaster John McBeth has a nice story about Peter 'Sammy' Henderson in his latter years.

"You can use the picture i had taken with Peter in July 2009. It was snapped in Wanganui in July 2009 after Wellington defended the Ranfurly Shield in an away game v Wanganui. The Wanganui union held a reunion at the same time and Peter was there.

"I had a long conversation with him there and his son Ian. Then, out of the blue, a year later Peter rang and asked if I'd like to accompany him to the All Blacks v South Africa match in Wellington. I had a really lovely time in his company; not only did I go to the game and sit with him but I went to the annual ex-All Blacks pre-test dinner there too.
"Peter was in good form all weekend and I recall he was even keen to go to the Centurions Club after the test for a drink. As I approached the bar I noticed former New Zealand Maori All Black Pat Myers- hmself a pretty talented winger in his time. I suggested to Pat that he might like to meet the elderly, smartly dressed chap who was with me. Pat, who was with some friends, wasn't in a rush to leave them but when I said the man in question was Peter Henderson, Pat nearly fell over. "As a kid he was my absolute hero,"said Pat! And for about an hour the two of them nattered away like old pals - and old wingers (!) do. It was wonderful to witness."
The Barbarians club in Auckland will be very sad about Peter's passing. He was a keen 'Ba-Baa.' He also played bowls regularly until late in life; for many years he was part of a regular tournament for former league and union players. He often paired with his old 1949-50 All Black team mate Bob Scott. The two were great company together.
With Peter 'Sammy' Henderson's death (as of December 2014) there is only one member of the 1949 All Blacks still alive. He is the Auckland second five-eighths, Ron Elvidge.
by Keith Quinn; with thanks to Lindsay Knight, Chris Rattue and Wikipedia.

Several international rugby matches (of sorts) have been played on the ice of Antarctica, so they should be recognized in an A-Z such as this.

In 1989 a group of scientists and staff started a match between USA and New Zealand. It is a fixture on the ice which has been played intermittently over the years since.

There are several unique features about rugby in Antarctica. Firstly the game is played on a snow-covered ice field and sometimes there have been no goal posts. Implanting posts into the rock-hard ice is nigh impossible. Sometimes the game has been delayed several days until the weather clears. The clothing the players wear is interesting; often it has been full kit needed for living in extremely cold temperatures. Sometimes too, the teams have been of mixed gender. And often it is not certain whether teams will be at full strength. One year a New Zealand squad gathered prospective players at 3pm, picked their best line up, and the game kicked off at 3.30!

In an international between the New Zealand Scott Base team and the USA McMurdo Base team in 2001, the New Zealanders scored three tries to one, but the score was posted in the weekly Antarctic Sun newspaper as being 9-3. Obviously the message had not made it through to the people on the ice of the increase in points values for a try! That had first happened over 30 years earlier!