You are here: Home » All Blacks year by year » RIP » Let's face it; Kevin Skinner was a very vital All Black 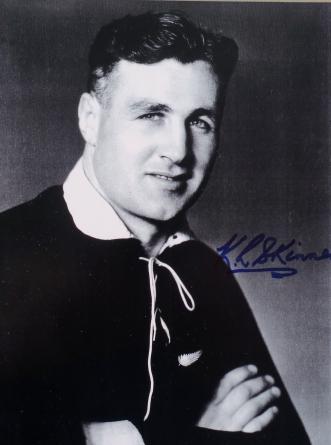 I felt really sad when I heard of the death of Kevin Skinner. He was such a genial man in his later years until his health started to fade. At the Barbarians Club at Eden Park in Auckland he was always a friendly face, chatting away. And invariably gently chiding anyone who tried to push onto him the reputation many New Zealand rugby followers had that he was forever and only a rugby thug. He was not that at all. I prefer to call him a vital man who was very much needed by his country in some most critical rugby years.

Kevin had a really top career in the game. He made his All Black debut as a 21-year old prop forward in 1949. By 1952 he was good enough to be made captain of his country when the All Blacks retained the Bledisloe Cup. When he retired at the end of the 1953-54 All Blacks tour of Great Britain and France he was one of the stars. On that final trip he had played 27 of the 36 games - a total I might add today's professional players might only blink at in horror and call for their managers to ease the workload.

But in those amateur days Kevin and all the All Blacks, no matter how famous they had become, all had to go to work. The burly Otago man had originally been a grocer but he and his wife Laurie had the chance of securing some farming land in Waiuku, in the south of Auckland city, so 1955 was a restart and change of direction for the Skinner family.

Around that time they had a daughter who had been born profoundly deaf. So Kevin and Laurie made the shift northwards to gain closer access to opportunities in education for their Susan. (Eventually they were to move out west in Auckland to be near the famed Kelston School for the Deaf)

By 1956 Kevin was only 'half interested' in playing rugby. He turned out for the Waiuku club when the season started. Kevin was then 28 years of age (again by comparison to today's professional hotshots you might say he could have had maybe four or five good seasons left.)

But in 1956 the New Zealand rugby public was in turmoil. The oldest of our enemies of rugby, the Springboks, had come to our shores. The All Blacks in 45 years of trying had never won a series against the Springbok might. The South Africans brought a formidable lineup to tour, and though they stumbled and lost their first game in Hamilton they found their feet thereafter and were going so well the country fell into what can only be called a fever pitch, but tinged with a blood lust, so desperately were they to turn the visitors back. The Springboks had four massive props in their tour party. Two in particular, Chris Koch and Jaap Bekker, were causing havoc as they muscled their way around New Zealand.

New Zealand won the first test in Dunedin but one of our best props Mark Irwin had suffered a serious back injury in the hard-scrabble of the forward scrummaging.

Watching from home in Waiuku Kevin Skinner might have smiled perhaps. He knew Chris Koch in particular and Jaap Bekker a little bit. They had crossed paths in quite a few battles on the 1949 All Black tour of the Republic. Bekker for Northern Transvaal and Koch and Skinner marking each other across the front row in three of the four tests. Yet as was the way then the two became mates afterwards. They even swapped letters in the years which followed. As a further nice touch Kevin himself told me that when the 1956 team had arrived in Dunedin the big South African prop sent test tickets and flowers around to Kevin's Mum. He wanted to say hello.

Even though New Zealand had won that test on Carisbrook the New Zealand selectors sensed they had some real front row problems ahead. Bekker and Koch were so dominant.

For the second test in Wellington the All Blacks called in a fresh young Otago forward, Frank McAtamney. He was 22 years of age. Frank had been holding his own around the New Zealand rep scene for  a couple of seasons. But on a gray Wellington afternoon Frank and his fellow prop Ian Clarke had massive trouble holding up the Springbok scrum. In a bitter encounter the test was lost by the All Blacks. As other aspects of the New Zealand team's play that day had not gone well (like the captaincy, the authority needed in the halfback position and fullback play too) a universal call went out for 'changes' to be made for the third and fourth test matches. The public demanded that the All Blacks show more grunt upfront (there was more than a hint that they should fight more) or else it was sensed the improving Springboks would wipe the floor.

As a kid I can recall we waited nervously for the third test team to be announced. There was no TV of course then so we huddled around the radio and on the appointed day a stentorian voice came into ours and every other home in the country. When we heard 'fullback D.B.Clarke - Waikato' there was an almost nationally audible sigh of relief. The 22 year old Clarke had joined his brother Ian the team. That meant any goal-kicking problems would be out of our worries. Don Clarke was amazing.

Then came Alan 'Ponty' Reid called in as halfback and we all sat back with satisfaction. This would be a better team - we knew it!

But when the last name for the team was called out the nation was stunned. 'K.L.Skinner - of South Auckland Counties' was announced for the front row. It was a complete surprise. We thought he was well and truly retired. But NOW we knew our team would have edge, toughness and grunt for the battles ahead. Skinner had been a New Zealand amateur boxing champion after all.

Kevin told me he had had two visits from rugby officials to his farm after the first test to 'pleeeaase' ask him to ready himself for the call-up. He was desperately needed, Kevin was told.

So Skinner readied himself to play in the third and fourth test matches.

What games they were! And what a dramatic role Skinner played in them.

In Christchurch for the third test, in front of 50,000 baying fans, Skinner landed not one but two deft blows with his fists, (yes, he insisted he only threw two punches in the game) but with them the threat of Chris Koch and Jaap Bekker was totally diminished.

I loved the story Skinner told years later about his meeting again on the field with his old friend Chris Koch. At an early lineout in Christchurch Koch had barged across and blocked the New Zealand jumpers. When I interviewed him for TV Skinner said to me in his lilting voice, 'I told Chris, "don't do that again my friend." 'But he did, so I hit him. Just once. But it was a good one. And he didn't do it again!' (To repeat Kevin had been a top boxer in his young years!)

Then there was the issue of Jaap Bekker. The burly Northern Transvaaler had been an early handful for Ian Clarke to deal with in the scrums. The disruptive play by Bekker was not helped by Clarke suffering from a badly swollen cauliflower ear. At halftime, the two New Zealand props had a discussion and agreed that if they swapped sides then Clarke's ear would go to the 'outer' side and he would have considerable relief.' Skinner then said 'in the early second half scrums suddenly it was Bekker who kept 'trying it on with me, so I had to give him a wee nudge as well.' That was the way rugby issues and disputes were settled on the field then.

By significant 'wee nudges.' Kevin's second punch must have been a good one too. Jaap Bekker had come from a famous South African sporting family. Indeed his brother Daan, within months was to win a bronze medal in Boxing at he the Melbourne Olympic Games. (And a silver medal four years later in Rome, 1960)

But in the rugby series all issues of the moment had been settled with that example of Kevin Skinner's direct action. With the absence of any full film or video coverage there are no reports of any more fighting in the game. Just stories of fast and dramatic rugby. Don Clarke, the debut footballer, had played a blinder. He kicked a couple of massive goals and the All Blacks won by 17-10. But the recalled Skinner had sorted things out.

In the fourth test played on my birthday at Eden Park, the sporting public of New Zealand were stretched to the highest level of nervousness ever seen. I have the most vivid memory of my brothers and I huddled once more close to hear Winston McCarthy's radio commentary. When he described the front of the lineout dash to score by the hugely popular Northlander Peter Jones the whole country cheered the team to the echo. New Zealand won by 11-5. We had beaten South Africa in a rugby test series!

Kevin Skinner was a member of that most famous of teams too, his presence being again absolutely vital in shoring up the New Zealand forward effort. Yet afterwards there were no drums and trumpets for him or from him. When the victory had been won he quietly went back into retirement, satisfied one hopes that he had answered his country's call - but also perhaps not knowing what an overstating of his two punches would grow into in the full New Zealand rugby story.

Sure the first All Black test series win over South Africa had been secured by some tough play. My feeling is that Kevin Skinner went to his grave satisfied he had only played a small and modest role in the glory! It has always been others who pumped him to the higher status.

A successful All Black manager, coach and theoriser of the game, who wrote a very useful coaching manual, and a fine halfback whose career was cut short by World War II.

Charlie Saxton’s greater claim to fame was as captain of one of the most respected New Zealand rugby sides. Post-war blues were lifted throughout the British Isles and Europe by the sparkling play of the ‘Kiwis’ – a side chosen from New Zealand servicemen.

Captain of the side, and then 32, Saxton lost nothing by comparison with the talented young men joining him, 16 of them going on to become All Blacks. The side won 32 of its 38 matches in a five-month tour, the Saxton dive pass setting off his backs on many a thrilling movement.

He was an outstanding All Blacks manager in 1967 and a life member of the NZRFU.

Why did the Wallaby rugby team only practice in the afternoons at the 1987 Rugby World Cup?

So that their coach Alan Jones could continue to host his weekly radio breakfast show.