You are here: Home » To 1986-97 Scottish and British Lion Scott Hastings

This Ten Questions idea is to ask a leading rugby personality; either a player, or from the the media or an administrator some questions which may prompt a response from them which we have not heard of before;

It must have been a great day in the Hastings household in Edinburgh on 17 January 1986. Two brothers from the same family made their test debuts on the same afternoon for Scotland. Gavin was the older by three years. He was fullback while Scott, the younger, was one of the centres. Both went on to become key members of Scottish and British rugby and to this day are strong personalities for the game.

Scott was a very sharp midfield player with excellent attacking skills while at the time his defence was as good as any back in the world. The spread of Scott's time in international rugby was over 13 seasons. He played 65 test matches in all and attended two Rugby World Cup events. He was also a British Lion, touring to Australia in 1989. There he played some of his sharpest rugby, playing in nine of the 12 tour games, including two tests against the Wallabies.

There is perhaps an insight into Scott with this quote on his twitter account heading; "I believe in depth of spirit in the heart of mankind. I have the will to be better tomorrow then I am today."

After his playing days concluded Scott's ebullient character has seen hm move effortlessly into the media. He has been a regular TV presenter and broadcaster in a number of areas over the last few years. He has become a regular on the IRB's World Sevens Series. He lives in Edinburgh.

My thanks to Scott for his willingness to open up to 'Ten Questions' for keithquinnrugby.com

A picture follows of Scott Hastings in action for his beloved Scotland. 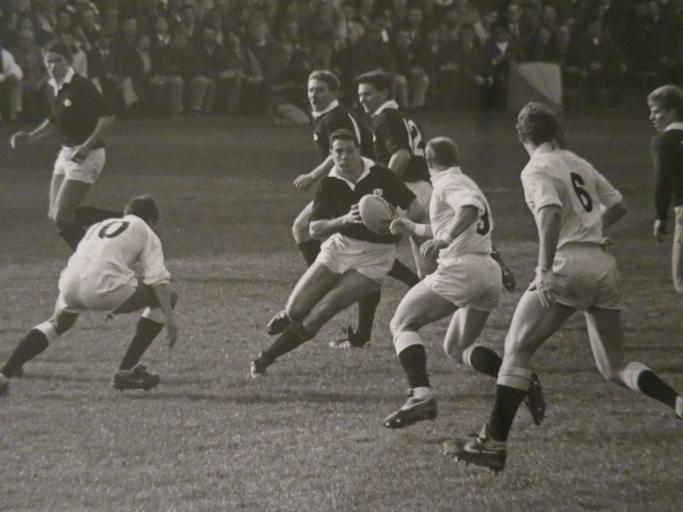 In rugby it was Andy Irvine the great Scottish and Lions full back. A brilliant attacker he was my Scottish hero! In golf it was Jack Nicklaus – just wish I could have played golf like him!

I say to folk; New Zealand is like Scotland but the weather is better and I do love NZ but I was invited to the Turks & Caicos Island recently and that was pretty cool. My 2 favourite cities are New York and Hong Kong but I would not wish to stay.

I can sometimes come across as patronising (according to my 18 year old daughter) but do not know I am doing it.

Swearing – there is no need for it - and dropping litter! Not saying please and thank-you and to be polite and courteous – values in life that my parents taught me.

When I played for my rugby club Watsonians I’d always use the same peg. After 227 games and 12 seasons I managed to extract it off the wall and I still have it to this day!

Everyone dreams of playing for their country. At the age of 21 my 1st cap was pretty special as was my Melrose 7s winner’s medal. Melrose was where the game of 7s was founded and now that I commentate on the IRB Sevens World Series and have seen at first hand the explosion of this wonderful game, it gives me great satisfaction to have secured my medal from the place that invented the game!

My wife Jenny is a pretty important 'possession' if that's the term! We met at school and she has always supported me in everything I do but apart from her and of course my kids there are two other things that mean a lot to me.
Rugby players - well Scottish ones; they do not win many medals but my Melrose 7s medal is pretty special and alongside that medal on my mantelpiece at home sits a carved statue of a Lion. It's carved from green stone and I bought it in South Africa at the Rugby World Cup in 1995. It is a reminder to me of a fantastic tournament; my first safari at Mala Mala Game Reserve and a pat on the back to myself for playing for the British & Irish Lions.

I treasure every day I am here and currently live the dream commentating on rugby and being involved in sport.

One of my teachers wrote in a school report that ‘Scott should try harder’. I do this every day of my life!

Every day there is Rugby History 11 September 2010

Click to show A significant mark for 'Our Richie.'

On this day he captained the AB test team for the 52nd time, thus passing Sean Fitzpatrick's old record of 51. NZ beat Australia by 23-22 in Sydney

The talented New Zealand utility loose forward, who sadly, might be remembered more as the man who had the unenviable job of returning home after being the captain of the beaten All Blacks at the 1999 Rugby World Cup. Such a summary is totally unfair as Randell’s team left for the Cup with excessive expectations from the New Zealand public, and it belies the fact that Randell was a top international forward right through his playing career. It is just that by various All Black selectors he was shunted though three loose forward positions and not ever being allowed to settle in one.

Randell came into the All Blacks on the 1995 tour of France, and within 12 months on the 1996 tour of South Africa he had become a 21 year old captain of the midweek New Zealand team. By 1997 he made his test debut against Fiji at Albany Stadium at North Shore, Auckland. That year, in a gruelling sequence at the time, he played in all 12 tests on the All Blacks programme. One of those was as a number eight forward, the others as a blindside flanker. In the next year the All Black coach John Hart elevated him to the test captaincy. At 23 years old he was the fourth youngest leader in All Black history. He played the first five of those tests as a number eight but was then shuffled back to the flanker’s role.

Initially the captaincy sat kindly on Randell’s shoulders. But as a sequence of defeats crept in, rather than blame the older players, it was the young captain who took the rap from the public. He seemed to lose confidence and, at times, composure.
In 1999, World Cup year, the New Zealand public believed that the spirit of the All Blacks would come through again and young Randell was again charged with leading the team, with the massive trust again on his shoulders.

The All Blacks reached the semi-finals against France at Twickenham but there the New Zealanders world came crashing down. France won 43-31. In Britain (and France no doubt!) the game is remembered as one of the greatest ever seen at Twickenham; in New Zealand it was seen as a national disaster. And heads had to roll. Coach John Hart resigned as soon as the Cup series was over. Randell had to wait till new coach Wayne Smith decided if he wanted to retain him or not. Smith did, but not with the captaincy. Todd Blackadder was preferred instead. The leadership was wrenched away from Randell who had to publicly face the wrath and scorn of the public.

He played most of the season in the team however and after the departure of Smith as coach, (replaced by John Mitchell), and injuries to two further All Black leaders (Anton Oliver and Rueben Thorne) Randell was restored as captain for the late season tour to Europe in 2002. By then, at 28 years old, Randell was a much more mature person and to most people’s delight he handled things well. In the game against France at Paris he became one of the small band of All Blacks who in those times had passed 50 test match appearances.