You are here: Home » News Comment » This week I stood on the spot where some All Blacks died nearly a century ago. 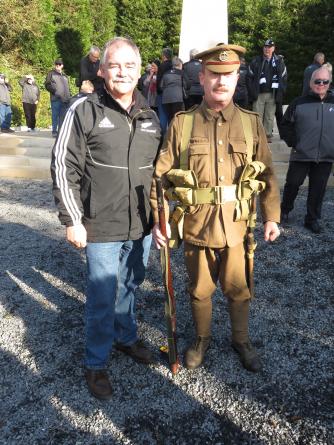 As tour leaders of  the Wiliiment Sport Travel groups in UK and France this winter (mostly following the 2014 All Blacks) Dave Loveridge and myself, with our wives, had been acutely aware that the inclusion of a 2-day breakaway trip from London to northern France and Belgium would be particularly poignant this year. 80 supporters were down to visit familiar battle sites for New Zealand war historians; places like; Messines, Passchendale and Ypres.

And so we did, standing bare-headed in the chill morning sun in Belgium on the 11th of the 11th of November, as the New Zealand national anthem rang out in front of the Messines Memorial to the fallen New Soldiers who lie in the impeccably kept Commonwealth war graves. Wreathes were laid by both Belgian and New Zealand officials, Binyon's ode was read and silence rang out across the frosty meadows of the nearby farmlands.

Later I was able to reflect that of the 13 All Blacks who died in World War I four were killed in a fortnight more or less right where we were standing this week. The Memorial to the fallen New Zealanders is at the top of the ridge where the great battles took place for the German-held village in June 1917.

As best I can here is a list of the All Blacks and where they fell in World War I. But I publish it with full respect to the memories of many other fine Kiwi sports people of all codes who died in those horror times. And also of the thousands of others who lie in graves, many unmarked, in what is now a serene and very peaceful part of the world.

There was real poignacy for Dave Loveridge who was with us this week. Not only is Dave an ex-All Black test captain, but he is very aware that the first ever 'All Black' team leader Dave Gallaher (of the famous 1905-06 team) is buried only kilometres away from Messines in Poperinge.

And the Reg Taylor story adds more too. He was one of the others who died where we were standing. in Messines in 1917 in fact. He, like Dave Loveridge, was an All Black farmer who originally hailed from Inglewood Taranaki.

RIP the dead ALL BLACKS from World War One; (in alphabetical order)

Hubert 'Jum' Turtill - died in France 9 April 1918 - (Was one of the first All Blacks to go to rugby league ('northern Union'). He joined the war with the British Armed Forces)

Every day there is Rugby History 2 December 1967

The great All Black Colin Meads was sent off v Scotland at Murrayfield. Did he deserve to go? All NZ says 'no!' But the ref had the final say.

On the Teen Rugby Show on TV in New Zealand (on 18 July 2006) which All Black used the words; 'bugger, shit, shits and shithouse' in a five minute item.