You are here: Home » News Comment » The Greatest Game of Rugby I Ever Saw. Read about it here! 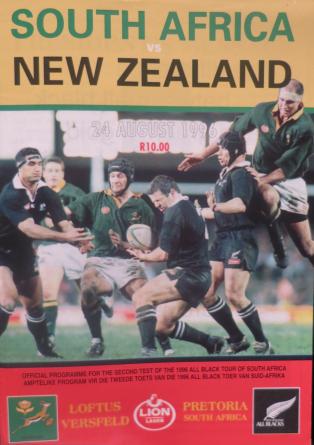 People often ask me ‘what was the greatest game you ever saw?’ As a young reporter I used to say it was the magical King Country v Hawkes Bay game for the Ranfurly Shield in Napier in 1968 (Colin Meads’  King Country team just got pipped by Kel Tremain’s Magpies by 19-16; 8 tries in the game! – a real thriller!) (To put that into perspective for you, you ought to know I had been born in Te Kuiti and King Country was then ‘my’ team!) But nowadays for my ‘bestest’ game I always go back to the glorious memory of the All Blacks v South Africa game in Pretoria in 1996. There was so much at stake that day and the game more than matched its expectations.

THIS IS HOW I WROTE ABOUT IT FOR "NEW ZEALAND RUGBY WORLD" a few years ago.

HOW THE GAME PLAYED OUT: The game was part of five tests between the two great rivals in seven weeks in 1996. Each of the tests in that series was a game of the highest order of rugby expression and physical commitment. Four of the tests were played in South Africa and after winning the first two there New Zealand fans at home sensed there was chance the Sean Fitzpatrick/John Hart All Blacks could become, if they played at their utmost, the first team to beat the previous year’s world cup winners in a full test series on South African soil.

At the end of one of rugby’s most dramatic afternoons the All Blacks won a truly great game by 33-26. Each of the 51,000 in the crowd at Loftus Versfeld Stadium had-been well-versed beforehand in the ‘meaning’ behind the result so the noise and tumult never died. The last moments when the All Blacks hung on grimly and denied attack after attack from the Springboks became for me the most exiting rugby I had ever commentated.

WHAT MADE IT SPECIAL:  The day before the game I had ‘called a meeting’ with my co-commentator, that proud Otago man Wayne Graham, in my room. I outlined to Wayne how I, as a kid, had avidly followed the 1956 tour of New Zealand by the mighty Springboks of that year. I detailed to him the excitement engendered by that tour and how the little nation of New Zealand roared its approval, when on my tenth birthday, the All Blacks clinched the first ever ‘home’ test series win on Eden Park. It was best birthday present ever.

In other words I detailed to Wayne the importance of the game we were to broadcast in 24-hours time and how he and I must be ‘ready’ for all the drama that was bound to unfold. It was kinda like a commentator’s team talk I suppose.

Then we of the combined media crowded the narrow corridor outside the winning team’s dressing room. Eventually a widely-smiling John Hart emerged. But what was this? Instead of holding a press conference he first called for all of the New Zealand media to come forward. We were invited into the dressing room because, as Hart so warmly said to us, ‘we are all New Zealanders together today.’ We broadcasters, writers and photographers pushed past the grumbling South African media.

[Footnote; on August 24th 2011 a small dinner was held at John Hart’s apartment in Auckland. Present were all of the management team of that tour, except for the much-missed selector, the late Gordon Hunter. I was invited to ‘represent’ the media on the games 15th anniversary. Each person from the group had to make a three-minute recollection of the game. From the warmth of the night and the recaptured memories the evening ended with plans put in place for a full reunion for all of the team in years to come. Maybe it will be in 2016? It will be a very appropriate thing to do for one of the greatest of All Black victories.]

Benoit Dauga was a highly versatile forward who played for his country in three positions – lock, No. 8 and flanker. A lineout specialist, he was an expert leaper and dispatcher of the ball to his halfback. Some of the media called him the ‘control tower’ of French 1ineout play, and others the ‘Eiffel Tower’. He was also a strong runner and a highly competitive forward.

Dauga’s debut in international rugby was not auspicious. He had to wait until his fifth test before he was in a winning team (v Italy 1964). He maintained his place in French test teams until he reached 63 caps, which equalled the record set by Michel Crauste in 1966.

A big man, Dauga stood 1.94 metres tall (6 feet 41/2in) and weighed 110 kilograms (17 stone). His frame was such that he stretched rugby shirts to their limit and socks could not pass over his calf muscles! He also had what some might describe as a prominent nose. Colin Meads, his New Zaaland lineout rival, once light-heartedly said of Dauga, 'He's the only man I know who could smoke a cigarette while taking a shower!'

Dauga was highly regarded and played in most countries in the rugby world, including New Zealand and Australia in 1968, and South Africa in 1971. He was a French captain as well.

His rugby playing days ended in 1975 when he was injured in a club match for his beloved Mont-de-Marsan, suffering temporary paralysis of the arms and legs, and requiring a long spell in hospital before recovering his fitness and resuming his interest in the game.

How many test matches for Australia did the three famous Ella brothers play, on the field at the same time?