You are here: Home » News Comment » The Day a Proud Mother Had Her Say in a Rugby Test! 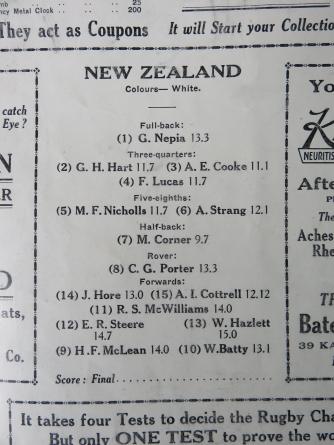 This story is part of folklore at the Barbarians Club in Auckland, New Zealand. It is one which shows that even in the middle of a feisty rugby test match a mother's pride will still come shining through!

Back in 1930 an excellent Wellington forward Hugh McLean made the All Blacks team to play Great Britain in the third test. No one was much surprised at this as McLean had been in excellent provincial form in recent seasons and two years earlier his strength and sporting capacity had carried him into a New Zealand rowing eight. That crew was bound for the Amsterdam Summer Olympic Games. Sadly they didn't make it as funding eventually was not on hand for such a large group of men to travel so far at one time.

But 'Hughie' got his chance in 1930 to play for the All Blacks. His debut was to be on Eden Park in Auckland.

When the team assembled beforehand and McLean was handled his hallowed black playing kit he expressed surprise that he was to wear jersey number 13. His reluctance was not because of any superstition. That number had not been allocated for him in that day's match programme or in the morning newspaper. In the centre pages he was down to pull on number nine.

But you see, seniority within the All Black team ranks played its part. The crusty veteran W.E. ("Bill') Hazlett of Southland had an apparent aversion to wearing the 'unlucky' number 13. So Hazlett claimed number nine and the new kid was 'told' to wear 13.

Whether this actually bothered Hugh is not known but when the game kicked off it could have been the reason he played so superbly. The young forward in fact dashed in for two tries as New Zealand won 15-10 and took a decisive lead in the series. As the action went on everyone watching soon started talking about the new forward in the All Blacks and how well he was playing. Those were days well before TV of course so even the keenest of All Black fans only had newspaper photos of players faces to go by. Therefore the crowd soon started calling out in praise of the great game which was being played by 'Number nine Hazlett! Go Hazlett!'

Sitting in the grandstand that call irked no one more than Mrs McLean - Hugh's mother.

When her son scored his second try on his test debut she could stand it no longer. When the cheering was dying down the redoubtable Mum rose from her seat. She turned to face the crowd and in her most commanding, if not demanding voice, shouted out to all and sundry - 'That's not Hazlett! That's my boy Hughie!'

That was it! McLean went on to play for the All Blacks until 1936. Was it just desserts that after that season was over Hazlett never donned any All Black jersey again!

Note II;  The accompanying photograph here of the day's official programme shows Hugh McLean listed to wear jersey number nine and Bill Hazlett Number 13. The programme also shows the 'All Blacks' down to wear white jerseys. This was correct. Throughout the four-test series with Great Britain, New Zealand as hosts wore white so as not to clash with the dark blue colours of the visiting team.

The great Colin Meads plays his last game for his country on this day.
His career as an All Black had lasted 15 seasons inclusive 1957-71. It ended leading NZ to a 14-14 draw again the British and Irish Lions at Eden Park.

Who captained the All Blacks at the 1991 Rugby World Cup?