You are here: Home » News Comment » The 2015 Wellington Sevens - Was it a Success? The Media had its Say in Promotion of this Event. 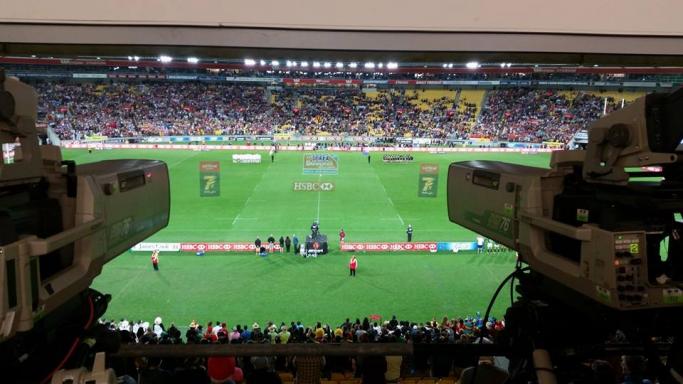 After all the pre-tournament chat which we Wellington sports watchers and listeners had been subjected to about how bad, shocking and terrible the Wellington 7s rugby event was going to be it is great to sit here now and recall, that from my opinion, just what a success it was.

OK, the crowds were down to only about 20,000 each day but those who did attend  sure had fun and they saw some thrilling rugby union of the highest class.

The thing is though - the naysayers still won't be silenced - only 12 hours after the Championship Cup had been handed to the New Zealand team, I picked up my letter box delivery of The Sunday Star-Times and somebody called Colette Devlin (who I haven't had the pleasure to meet though I've only been around rugby for 50+ years) began her story on the two days by writing 'Stark empty yellow seats outnumbered the fans at the Wellington Sevens this weekend as what was once the sport's hottest ticket struggled to attract the punters in the fortnight after the Auckland Nines.'

After not writing a word about the fact that New Zealand's team won the grand final in a great sporting atmosphere over England she instead was assigned by her editors or included, by her own attitudes, mention only of the 'sorry sevens,' 'disappointing numbers,' 'smaller crowds,' 'number of arrests, etc' and she even quoted one person about being 'over it,' in terms of the Sevens being a sporting attraction (as compared to The Nines, the rugby league event in Auckland the week before).

A different writer, maybe one with goodness or optimism in his or her heart, could have written instead about, 'Those who went to the Sevens still had a great time,' 'a smaller event meant no crush in the crowds,' or even 'with 20,000 having fun it showed the event definitely has a future.'

[Actually I loved the comment I saw on the TV News when a quick edit of Sevens crowd's reaction had one bloke in front of the camera grinning wildly while declaring, ' gee, it was great - less people meant there was more room and not as many dickheads as usual!']

Well said mate; I could have said it myself!

But all of Ms Devlin's writing - and that of others in the Auckland based New Zealand media - seemed only concerned with the Wellington Sevens being compared to the Auckland Nines.

In the days leading up to the Wellington Sevens your correspondent here had been watching the nightly news on our TV stations and doing a reasonable amount of pre-event reading of newspapers and websites, plus radio listening, wondering just when the significant mentions about the upcoming Wellington Sevens were going to start.

I found it was easy to note a much lesser emphasis of pre-event stories in the media about the Sevens. That was compared to the seemingly shameless push, plugs and promotions the same stations and papers appeared to be doing for The Nines event the week before.

So I went onto twitter each night and in my fumbling (and admittedly one-eyed) manner I niggled away at the stations urging them to hurry up and do something about the Wellington Sevens.

But it got to the point where The Crowd Goes Wild , the nightly irreverent  sports news show on Prime, assigned one of their senior reporters to do a rap piece of several minutes duration, not previewing the Wellington Sevens in any way, but instead making gentle fun of - yours truly!

While I should have been flattered, the whole thing was crazy (You can follow my tweets down the side of this website page)

My point in all this is; If the Wellington rugby union Sevens had have been the 'Auckland rugby union Sevens' there would have been all manner of stories on every night on TV before the first ball was kicked off on Day One. This was best exemplified by the same CGW people having run one rugby league Nines 'story' the week before showing a pretty female reporter dressed in itty-bitty shorts in a gymnasium interviewing rugby league players who had their shirts off and their tattoos glistening, about the ostensibly essential issue of which team or player in the Nines was going to do the best waving and celebration signals after they had scored a try.

To me that is because the event was held in Auckland and therefore ease of cheap promotional access is presented to the media outlets by event marketing people at any tick of the clock.

Thankfully same gormless 'gymnasium stuff' did not happen before the Wellington Sevens.

But while I say that instead I got miffed last week that the New Zealand Herald, Radio Sports, TV1 and TV3, and the CGW show did next to nothing most of the week about the Sevens. In CGW's case, as one CGW staffer tweeted back to me feebly, it was because 'we don't have a reporter in Wellington.'

To be fair TV1 and TV3 DID finally, by about Wednesday, start running stories.

As for 'The Crowd Goes Wild' their indifference of having 'no reporter in Wellington' inferred that was why they couldn't get off their chuff and do 'colour' stories, even those like the silly girl-in-a-gym effort. Or even spend a buck or three and fly a reporter down to the capital to do something more serious. (Instead two nights before the Sevens CGW ran a five-person interview and comment about American basketball plus the obligatory surfers riding giant waves somewhere in the world! To me that was easy and lazy.)

Now I'm not saying that those girl-in-the gym stories help totally in building crowds. Nor should they. Certainly Wellington city does have problems motivating sports watchers to go to any number of events these days (Hurricanes rugby, The Phoenix Football team, ITM Cup rugby and now The Sevens being the best examples of this malaise) but these days 90% of all media outlets across the board have their main offices and attitudes in Auckland (or as I say, 'north of the Bombay Hills and South of Albany') so that is where their emphasis in reporting is. They think if its an 'Auckland event' its worthy of our national interest. But not vice versa.

Even National Radio with its hypothetical non-commercial national spread of coverage, the day before the Nines rugby league event, gave the promoter Dean Lonergan a shameless three minutes of 'plug' time on Morning Report without any deep questioning for his event the next day.

What to do about this?

Sadly one has to report that maybe Wellington's wonderful rugby event has to do the 'Auckland thing' next year and hire some whizz-bang promotional company to come in and feed stories, via marketing people (and yes, reporters in itty-bitty shorts) back to Auckland to 'assist' them in thinking about the build-up. That would be sad but a reflection of where things seem to be in our country now.

Me? (Or as they say in Auckland snazzy chat) - 'For Mine' - I'd say the Wellington rugby Sevens should keep its head up and let the success of its 20,000 crowds per day of last weekend be a reminder next year that the 'no dickheads' option made for a better event anyway. And work from that basis to improve it in 12 months time.

Besides the event looked great on TV.

And to you Ms Colette Devlin? Humbly and with no rancour, with interest, I trawled the web looking for your SST story on the empty seats at Eden Park from the week before when the final of the rugby league Nines was being played. When that event's  final kicked off, without The Mighty Auckland Warriors  in it, way less than 20,000 were still in attendance in the ground. Get the video and check please.

The majority of the wildly exaggerated 42,000 had gone home in abject disillusionment and disappointment.

Maybe the media had gone too. For them there was no need to promote any more two Aussie clubs battling it out to climax a Trans-Tasman event.

For mine (there I've said it again) give me 20,000 genuine rugby fans cheering to the echo our New Zealand sevens rugby union team trying to win a genuine 16-national international event. And to hell with any yellow seats you can see.

Oh well... sigh! I guess in all of life you and I, Ms Devlin though we haven't yet met, are like two prisoners looking outwards from their cell.

One sees stars and one sees bars.

Every day there is Rugby History 31 August 1971

Click to show The date of death for an AB who took his farm horse off to war in Palestine.

James 'Buster' Barrett, in his time the lightest AB forward, went to WWI in 1915 with the Auckland Mounted Rifles division. His horse was trained for war while away but never saw any action and never returned.