You are here: Home » News Comment » Test match #1 of the 2015 All Black year is over; Keith Quinn reports 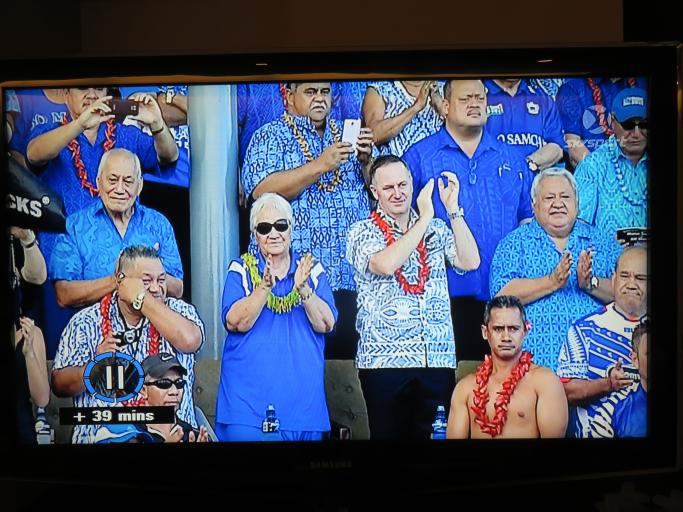 This is my summary of everything I gleaned about New Zealand v Samoa game in Apia - from the ample sofa at my place in Wellington. Weather, match report, & TV review it's all here.

* When the TV coverage began, at our first sight of the TV presenters, Ken Laban and Jeff Wilson we could see instantly how stiflingly hot it was in Apia. The perspiration was seen trickling down their foreheads.

* The choice of Laban to be involved in the pre-match and post-match presentations turned out to be an inspirational one by SkyTV. Though he is resident in New Zealand his command of his 'home' language was perfect for the day. He added class to the after-match function with his totally natural introductions of the Samoan Head of State, Tuiatua Tupua Tamasese Efi and the Prime Minister Tuilaepa Lupesoliai Sailele Malielegaoi (Thanks Google!). A fumbling palagi version of those names would have been disaster for the coverage.

* Ken's authority was also added to by him cutting back on excessive use of the word 'legacy.'  It is Ken's latest favourite word; one which he tends to overstate in much of his sports commentary and local body political work. The word is one which should be used sparingly in all life, don't you think?

But maybe that's me.

* I noted that the commentary teams wearing of Samoan-style shirts and lavalava skirts did not extend to the great Grant Nisbett. Did this indicate they ran out of his size (come on; he'd only be XXL at the very least), or, as I suspect, did 'Nisbo,' in his usual understated manner, politely decline to wear them? I suspect the latter.

* That the All Blacks also wore the distinctive Pasifika shirts and skirts - might this start a dangerous precedent? Imagine the team wearing bottle green shirts on a trip to South Africa or the Old Gold to Australia?

* The addition of John Campbell to the TV broadcast was very worthy too. He added class and a new enthusiasm. His pre-match video story was a very nicely crafted one. I look forward to a fuller version of it perhaps? A carping criticism might be that John's enthusiastic arm gestures, while talking on-camera with Jeff Wilson and Ken Laban, often swept the others out of our view.

* And then there was the 'funny' inclusion of a Samoan tourist video between the end of the national anthems and the match kickoff. We are  used to seeing close-ups of gnarly faces of players getting ready for the kickoff action, but instead this time, suddenly SkyTV were 'Paying the Piper.' Onto our screen came sweeping videos of waves crashing on sunlit Samoan beaches, then Samoan kids smiling wildly and bikini clad women swimming underwater alongside handsome blokes. 'Hold on, I said! There's a test match to be played!' However the froth and frolic only lasted 30 seconds or so - though that was enough time for me to say - 'Come on you jokers! Get on with it!'

* The game coverage was top-notch throughout. The on-field action was vigorous and lively and the crowd enthusiasm totally infectious. I imagine the world audience would have looked on and been amazed at what they were seeing,  probably for many, for the first time. The Samoa rugby experience as seen on Hi-Definition TV would have been a famous first.

* Did you ever see sweat dripping off the brow of Richie McCaw, like there was while the anthems were playing. Cripes I thought, it IS hot there!

* Some early observations; the field did not seem very wide, meaning the 30 players seemed to be always cramping each other for room. Or was that just the solid defences preventing midfield breakthroughs? The number of times Dan Carter attempted the rugby league style cross-kick to the wings suggests the All Blacks were very aware of the narrowness.

* That means the Samoan Rugby Union ought to have a look at its ground again. To host big test matches there must be a playing surface of proper dimensions. This one was noticeably narrow and its in-goal area was woefully short. (AND I read somewhere that its length was not 100metres but only 93.)

* Being further tough on Samoa; the playing surface was far too dusty and loose on top. Not good enough. We criticise Wales for their recent bad fields at Millennium Stadium. They are working to improve its surface. Samoa must do the same.

* Who was that man standing in front of the touch-judge on the far side of the field, right through the game, with a small camera mounted on a pole? Under the towelling hat, I suspect the man was James Somerset of the NZRU's back-up video staff. He was dressed in the full All Black walking-out gear and appeared to be filming scrums. That's all - just scrums. Nothing wrong with that I suppose if it's all approved. But what would WE think if our All Blacks were playing a test in South Africa for instance and there was a bloody-great Saffer with his camera impeding the 'Touchie's' view of what was going on in the darkness of the front row?

*  The All Blacks played a good, tough conservative game; I admired them for keeping to the 'game plan' which was obviously to allow Carter to cross-kick a lot to try to seek out the only space on the constricted field. (Moala's try was therefore good reward for that.) The rest of the time was 'honest endeavour' by the forwards to keep their opponents at bay.

*  Samoa I felt were a slow team by a high international standard. But they have very good musclemen and the team are very good spoilers. They will beat lesser teams at the upcoming World Cup with those strengths but will come unstuck when they play the top teams which have flair, real speed and deeper skills.

* No one should have been surprised at the Samoan loose forward trio. Afisa Treviranus, Jack Lam and especially Alafoti Fa'osaliva were brilliant. And when I saw Fa'osaliva burst through to score his try it took my mind back to exactly the same charge to score in the final of the Las Vegas sevens a few years back - and defeat DJ Forbes's New Zealand team in a wonderful final. The Samoan number 6 is one tough rooster!

* Of the All Blacks only perhaps Israel Dagg looked slightly off the pace. I liked Andy Ellis - he had to play his scrumhalf role close to the Samoan monsters - but did not shirk. Sonny Bill Williams did many good things too - it looked like he 'needed the game' but came through it with credit.

* Who was it who made the decision to allow Luke Romano to play the last quarter of the game with only a 'one-eyed' view of the game? There is a lot of talk these days about 'playing players who are hurt' and how dangerous it can be. It should not just be about concussion. Romano's black-eye was a shocker. He should have quit for the day when it flared up. Afterall we had Sam Whitelock and Brodie Retallick as his cover.

* And in a historic day when four new All Blacks played; George Moala, Brad Weber, Charlie Ngatai and Nepo Laulala it was particularly poignant for the Laulala famly. Nepo and his brother Casey, though born ten years apart, and not having lived much in the same house, became the first Samoan-born brothers to play for the All Blacks. Congratulations to them - but look also for perhaps some time in the future for Luteru Laulala. He was a chosen member of this year's World Champion winning New Zealand Under 20 team in Italy.

* The referee Jaco Peyper did dish out too many penalties in the game but hey - Highlanders supporters back home in NZ rate him highly - so let us give credit for controlling this one well too. I'm trying to think - was there one TMO decision at all to be called for? Maybe there was one! I think TMO George Ayoub might have had a quiet afternoon. I hope he was in a cool place.

* There were some lovely scenes to take in as the presentations took place. The photo of the two teams with arms draped over each other's shoulders with many of them having swapped jerseys will not only be a collector's item but a pub quiz special too. (I can hear it now, 'OK head's down; Please identify all of the players in the NZ v Samoa game, as seen in this picture, when it was played, way back in July 2015.'

* Even the post-match speeches were good. I loved it when Alisana Tuilagi spoke to the crowd in his native tongue. Why not? And when he switched to English he added in the direction of Richie McCaw, 'Hopefully you All Blacks, will come again and again and again to see us here...'

* However I have to say to the big man, 'Do not hold your breath old friend, what happened today on your famous Apia Park will take a long time to be matched again.' Samoa might like it but the NZRU might not be this benevolent again.

* In summary; it was a great rugby day, filled with loads of old-fashioned goodwill between the two countries involved.

* Thanks to SkyTV for bringing it to me on the couch - it was a privilege to see at last a game in such a beautiful location, one which has taken nearly a century to come to fulfilment.

Who was the first Welshman to captain the British and Irish Lions on tour?