You are here: Home » News Comment » Now that the All Black pre-World Cup tests are over Keith Quinn offers some conclusions as to how the All Blacks might win the big tournament. 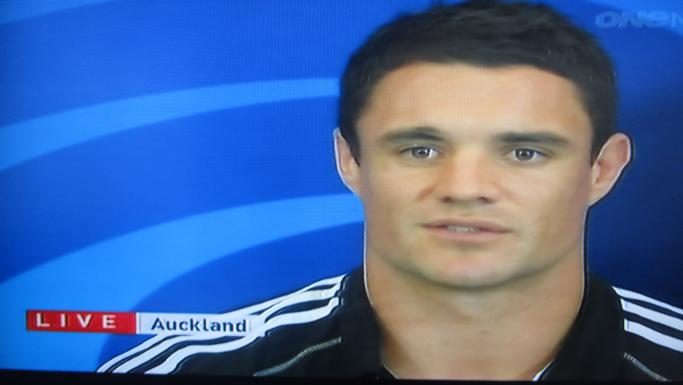 Elsewhere on this website I have offered my views on all of the very public discussion and chat about whether Richie McCaw might or might not be Knighted for his 'Services to Rugby.' But out of the final All Blacks pre-Rugby World Cup game (the 41-13 win over Australia) there were a couple of other good and bad things which also merit discussion.

I like Daniel Carter very much; always have - and after the Sydney game I couldn't believe the murmurings which almost turned into an outcry for his place in the All Black World Cup squads. Sitting quietly at Sydney Airport 48 hours after the game a bloke called Gus introduced himself to me and away he went. My personal reading of the news on the internet had to go down the drain while 'Bloody Carter this...and bloody Hansen that....and as for Sonny Bill ... and you can stick your bloody Kaino where the sun don't shine' came from my new friend. It went on and on...

It was so bad (especially noisy for the quiet people sitting reading or having a coffee) that I folded my laptop and said with dignity 'Mate, I have to go to my flight at the boarding gate.' My flight had not been called.

Daniel Carter was the first name he mentioned in the chronicle of things 'bloody Hansen has to bloody sort out... before the World Cup or we're bloody doomed!'

Why thanks Gus (and while I do recall your surname mate) I disagree about Daniel Carter. Like McCaw, He has adorned our game for years and deserves our respect. Sure some of his kicks in Sydney were not  up there with his best and maybe it wasn't Carter's finest shining hour. But I wonder what Gus, and others like him, were thinking when, on the hallowed turf of the Garden of Eden in the re-match, Carter played a blinder in the follow-up game.

We Kiwis are a funny lot!

Congrats to Carter I say. May there be at least six or seven more great games from him in the All Black colours before he lays his burden down.

Now another matter of praise; the tries scored by hooker Dane Coles this year would have to be among the best scored in All Black history by anyone in that playing position. Sean Fitzpatrick was a very fine player who wore #2 on his back, and Keven Mealamu and Andrew Hore split many a match over tough outings. But Coles with his surging runs and nose for the line has become a bonus feature for the current New Zealand team.

I watched the Auckland test in Wellington in a bar in front of a large screen and a boisterous crowd. When Dan Carter made his initial break a throaty cheer went up but when Carter handed on to Coles who started to run for a try from nearly 50 metres out the place went wild. As he scored the touchdown drew raucous laughter and backslapping. That, I suppose, is because we simply have not had athletic hookers before with the skills that Coles so obviously has. Those of us who live in Wellington know he has always had a sniff for a try but now it is a new windfall that he can score them from so far out - and so spectacularly.

If I was Steve Hansen I would give Liam Messam the biggest kick up the backside this week. Messam was not playing in the Eden Park game at all.  He was the designated 'The Water Boy' in Auckland and in the second half as he jogged onto the field to re-hydrate his mates in black a bit of a scuffle broke out among the Aussie and New Zealand players.

Messam was not content to wait on the outskirts of the big men wrestling but instead he suddenly took it upon himself to step into the fray.  One has to presume that his intentions were to stop any fracas getting worse but it did not look good. I would not have blamed the referee for calling for him to be banned from entering the field again.  Remember that man a few years ago in Durban who raced onto the field to remonstrate fatly with the Irish referee David McHugh? The intruder was hustled away by the police and a few days later appeared in court.

At a Rugby World Cup event an act by similar intrusion by Liam Messam such as he showed at Eden Park could have serious repercussions which we haven't heard of yet.

By the way; what are the rights of 'Water Boys' in rugby tests? Sometimes I see referees shooshing them off the field, while in other games the 'intruders' onto the field seem to be randomly handing out bottles for as long as they like. And all the while we all know they are conveying messages from the coaches to the players.

One not so good thing now let's face it Julian Savea, on his current 2015 test rugby form is way short of what he showed us last season. Yes, he has been heavily marked in his two outings which have been versus an excellent Australian outfit, but so far the big winger is definitely not the force for the team than he was 12 months ago.

He will travel to the World Cup for sure, but we shall wait and watch for better things from him there. It was worrying to see coach Steve Hansen concur with observers last week that Savea had turned up for training ever so slightly overweight after his off-season.

I noted before the game that Richie McCaw had a win/loss test career record with the All Blacks of 87.94%. Now after beating Australia by 41-13 his personal percentages of success has risen to 88.028%. A solid rise don't you think?

There are seven games needed to win a Rugby World Cup title; so if McCaw was to play in a winning All Black team at the World Cup and be rested from, say, one game  - his win/loss tally total over a final 148 career games played; will be for 131 wins, and that will equal a final career % of 88.5.

That final 0.5 is surely worth having Richie!

So now the facts are; the All Blacks have played five tests this winter for four wins and one loss. That they will be one of the favourites to win the Rugby World Cup is obvious. Their recent record speaks for itself - but I have a new theory.

The nation which will celebrate victory in this year's event in the UK will NOT be the team which puts the strongest 15 players on the park for any game. Nor will the team with the most powerful squad of 23 players win the shining gold trophy. I also do NOT think the best touring team of 31 players will win.

It is instead my opinion that the country with the best-equipped fully internationally experienced 45 - or so players who are fully integrated into the touring systems of today's test football - will win.

We know that only 31 can travel to the event, and we know only 23 can strip to play for any match and only 15 actually take the field for the kickoffs of course. But if there are stumbles, fumbles and injury tumbles  (and there WILL be) those who are at waiting in the wings at home will become key figures. That is why we have to watch our 'stay at home' All Blacks in the ITM Cup series, as they, like Stephen Donald did so memorably four years ago, might have to come from nowhere to play vital roles at key moments.

In that regard the All Blacks have shown this year that they certainly have 40+ potential test players - while Australia does NOT have such depth. Neither it seems do South Africa any more, that's judging by their confusing recent results. Nor do Ireland or Wales or Scotland. Perhaps France does but It is only England who does with any clarity, as they always choose their squads from a high powerbase of rugby endowment.

That's why I'm saying that the 2015 Rugby World Cup final will be played between the All Blacks and England.

And on Twickenham's pleasant pastures green, with an 80,000 crowd baying at everything, (that's at everything that Richie McCaw does in particular), it will take a Herculean effort for New Zealand to win.

That is what I see a month out from the event - you see if I'm wrong!

A Wallaby World Cup winner in 1991 who went on to play in three World Cups and become one of the world’s toughest and most competitive hookers. Back in 1989 Phil Kearns was one of Bob Dwyer’s young Wallaby picks, chosen out of Sydney club play to play the All Blacks. He was part of Dwyer’s long term plan with Australia’s future in mind. The plan worked. Players like Kearns, Tony Daly, Tim Horan and Jason Little all came through to be major factors in Australia’s victory over England at Twickenham to secure the second World Cup final.

In his career Kearns’ most competitive rival was the New Zealander Sean Fitzpatrick. They met on a number of occasions and several times they were rival captains as well. Kearns captained his country ten times in all but was then replaced as leader by Michael Lynagh for the 1995 World Cup.

Injuries took their toll on Kearns several times during his career. And after he suffered a severe Achilles tendon tear it was thought he might never make the top tier of play again. But after a gap of 18 months he was back in time to be part of the Wallaby squad which won again in the World Cup of 1999. Such courage to return was typical of this tough, uncompromising player who was much admired wherever he played.

In his retirement years he has continued his association with the game via Television commentary in Australia.