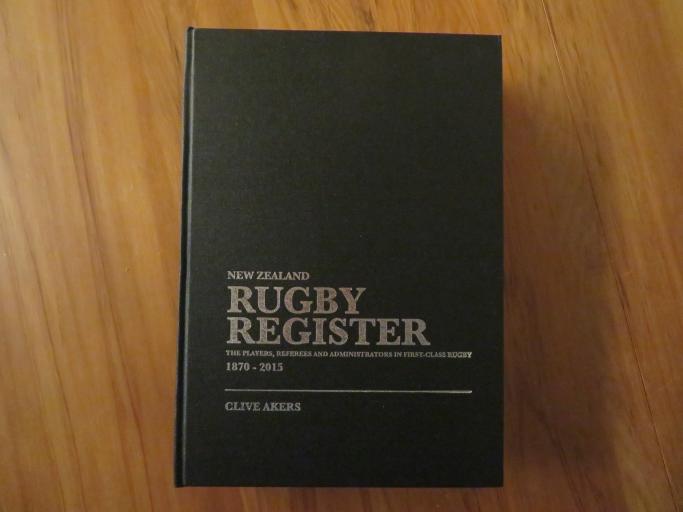 This message below is from John Lea of the Association of New Zealand Rugby Historians and Statisticians; A message to all followers of New Zealand rugby;

I hope wherever you are in the rugby world you might be interested in this phenomenal publication from Clive Akers, the Editor of the Rugby Almanack of New Zealand.  I have personally found this new book fascinating and a fantastic reference for many queries and research topics! It is called;

It is the most extensive career record on players and referees in first-class rugby over the past 145 years.

For the first time, the New Zealand Rugby Register provides an alphabetical list of every provincial representative (men and women) since the game was introduced to New Zealanders in 1870.

Price: $195.00 including postage within New Zealand.

In all of New Zealand rugby there has never been a book quite like that which has been produced by long-serving Rugby Almanack co-editor and Rugby Museum chairman, Clive Akers.  In his New Zealand Rugby Register Akers has recorded the names and biographical details of every player and referee and some of the administrators and coaches who have been involved from 1870 up until 2015 in New Zealand first-class games. He hasn’t stopped there and has also covered national sevens, age-group and secondary school representatives and prominent members of the media.  It all amounts to more than 800 A4 pages, bound in a hard cover, which is a reflection of the staggering amount of research which Akers has devoted over many years to the project.  Clearly while it is the most phenomenal reference book this writer has encountered in any sport, let alone rugby, the Register is not bed-time reading and is not going to be a best-seller. That obviously was not Akers’ intention.  But it will be of immeasurable benefit to any family proud of a relative’s deeds, historians, statisticians and any media hack who has been assigned the task of compiling an obituary on any old All Black or rugby personality when they have passed away.  Because it has inevitably involved mind-boggling research and covers such a comprehensive subject, one cannot vouch for the Register being 100% accurate. And if there have been mistakes or omissions then they would have to be regarded as understandable.  But from a reasonably good knowledge of New Zealand rugby at many levels over the past 50 years or more I can find precious few and have found confirmation of one or two claims which have been made to me personally.

I now know that a fellow bowls club member, one Andrew Tait, had a first-class game for Golden Bay-Motueka in 1965 and a couple of media people of recent years, The Dominion-Post’s Toby Robson and Sky Television’s Grant Nisbett, appeared briefly in first-class rugby. Robson twice played for a Wellington XV in 2002 and Nisbett for a Wellington colts side against Horowhenua in a Queen’s Birthday match in 1969 when on the same day the A team played Manawatu and the Bs played Marlborough.  The historically and politically minded will be equally fascinated to learn two Prime Ministers played first-class rugby, Keith Holyoake with Golden-Bay Motueka in the 1920s and before the turn of the 20th century George Forbes, the country’s hapless leader in the 1930s, for Canterbury. Another celebrated politician, from the Richard Seddon era, to have also played representative rugby was William Pember Reeves.  You will also find that the famous soldier and former Governor-General, Bernard Freyberg, was a useful player with three games for Horowhenua, that Tem, the father of the entertainer Howard Morrison, played for Waikato and New Zealand Maori and that John Devoy, father of the squash champion Susan, in the 1940s was a midfield back for Wanganui and Hawke’s Bay.  Or that the great lawn bowler Peter Belliss, before winning his world titles, was a Wanganui representative forward, continuing a family tradition which started with his grand-dad, Moke, a dynamic All Black wing forward in the early 1920s.  Many of us no doubt have been assured, either by the person himself or his relatives, that so and so represented Auckland, Canterbury or Otago. That can be confirmed by the Register. Or it can be disproved for there are many who confuse playing for a province at schoolboy and junior levels with the elite few who were representatives at the approved first-class level.

One might have to be a history or statistical buff to fully enjoy Akers’ monumental work. But it’s an important contribution to the archiving of New Zealand rugby and it’s something for which Akers deserves both gratitude and unqualified congratulations.

Every day there is Rugby History 29 November 1924

Click to show 'It was one point for every year we had waited!'


The All Blacks beat Wales 19-0 in Swansea; with, they said, one point scored for every year they had waited to avenge Wales's controversial 3-0 win in 1905.