You are here: Home » News Comment » Colin Meads - Where does he sit among the All-Time All Blacks? One Man's View. 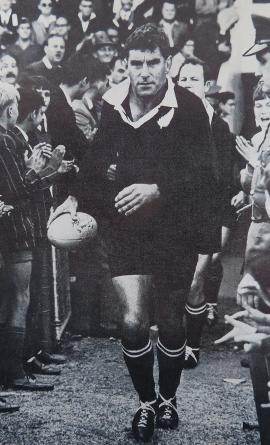 I watched a lot of Colin Meads playing on the rugby field. I am of the age that can say that. Shamelessly I can say I loved the way Colin Meads changed the game for previously lumbering second row forwards, which I was myself, albeit at a club level only. Meads showed us all another way to play.

But having been paid to talk about rugby, and follow the bouncing in my career I modestly claim to be ablre to judge players of a certsain time and type against each other on the field of plzay.

In writing this piece (which first appeared this winter in 'NZTODAY' magazine) I only claim to be able to offer one man's opinion. So here goes with my reflections as swhere I feel Colin Meads sits in the Pantheon of New Zealand rugby stars.

[A further backgrounder; I once shook hands with and had a few beers with the great Billy Wallace of the 1905-06 All Blacks - which I mention only to emphasise how far back I can go to at least talking to old players and weighing up what their opinions were too.]

in 2016 I went on TV1’s breakfast show when it was confirmed the great man of the modern All Black rugby scene, Richie McCaw, had retired. The then Prime Minister John Key was on the same show being interviewed in his regular Monday slot. I was next on.

To finish Mr Key was asked to comment on McCaw's departure and reflect on his place in the game of rugby in New Zealand’s history. The PM replied along the lines that ‘Richie was the greatest’ and he gave good reasons to back up his view. Fair enough. One man's opinion.

I was on next, principally to also talk about McCaw. ‘Do you agree McCaw is now the greatest All Black?’ I was asked.

I think I spoke firmly when I said, ‘No I don’t. To me there are two men above McCaw – they are those who changed the way the game is played in the world. One is Colin Meads and the other - Jonah Lomu.

My rationale was that ‘before Meads came into rugby, physically big men ho wanted to play were automatically put into the forwards to push, scrum and jump in the lineouts. They did little else in the game, except perhaps to trudge to do the same thing at the next set play.

Colin Meads broke that mould. He was the first forward to run fast, athletically, with the ball in his hand, while dummying and swerving. Soon every team in the world had running forwards trying to be like Meads. They still do today.’

I also added that Lomu came out of the Meads manner of making change. Except that Jonah was the first athletic big man to be sent to play in the backs; now every team has Lomu lookalikes.

So Colin Meads in his time was a revelation in the way he played. It must be said he was not a saint or a perfect person, but young watchers of the game these days who see the grainy videotapes of him in action perhaps do not realise that brute play and physical domination, sometimes by force or intimidation, while not approved, often had to be a big part in your team’s chances of winning. That’s how life was then. There were no touch judge flags, no video replays, no TMO’s; just basic retribution handed out on the field if necessary.

Meads was very good at presenting his authority (or unorthodox ball-winning strategies as one writer called it) during any game he played.

But the other very significant thing I love about the Meads legacy is that when his time on the playing field was over in 1971 (and he was an All Black for 15 seasons) he continued to give so generously to the national game and its image.

It could be said that by the number of times he journeyed up and down the country talking rugby to clubs and sporting organisations, by entertaining people as one of the all-time great after-dinner speakers (always with a beer in hand), and helping those in need, via significant, worthy but sometimes tiny and insignificant charities, he perhaps gave more to his country than he may have given to his family or even himself. Colin Meads has made in his life an unaparalleled offering to everything near or around what is, some might say, just about following a bouncing ball.

What I saw in Te Kuiti with the unveiling of the statue of him this year, and with the opening of the Meads Brothers Exhibition which also honoured his brother Stan, then the afternoon’s ‘bit of a tribute do’ dinner (as it was lovingly but officially called), and the crowds blocking the street to see, touch and be near him one more time, was something this absolute fan will never forget.

It's only one man's view - but I say it's Meads #1, Lomu #2 and Richie McCaw for leadership, commitment and longevity, #3.

Every day there is Rugby History 24 February, 1876

the 1906-07 All Black fullback), Ernest Edward 'General' Booth was born. He was nicknamed after William Booth, the founder and first General of the Salvation Army. After touring Great Britain with the 1905-06 New Zealand team E.E.Booth later became a rugby writer and was one of the first touring rugby correspondents. He travelled with the 1908-9 Australian team to Great Britain. Later still he gained notoriety (in the strictly amateur game of the time) when he was hired as a professional rugby coach by the Southland Rugby Union.

A vital part of the rugby game in New Zealand and Australia, but not always used in other parts of the rugby world. It used to be that the job of retrieving the ball for players in a game once the ball had crossed the touchline was a solely masculine prerogative. This is not now the case. Often girls do the job equally as well.

The ball boy’s or ball girl’s role is to field balls quickly when they cross the sidelines so as to get the game restarted without delay. It is a duty much vied for by young rugby people who relish the opportunity to take part in a big occasion, and to watch their heroes close up.