You are here: Home » News Comment » An Obituary for how one game totally affected a top referee's career. RIP Humphrey 'Doc' Rainey of New Zealand 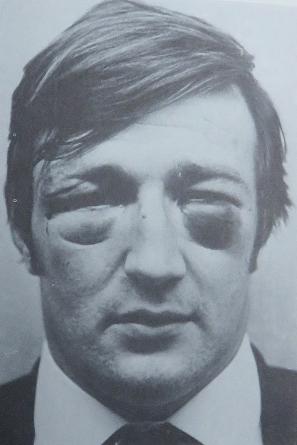 They say a week in politics is a long time. A lot can change... You could say that for a rugby referee the same principle applies. Back in 1971 Humphrey Rainey of Wellington who died on Boxing Day 2015 at the age of 89, was on his way to perhaps getting the call to control a test match on the British Lions tour Down Under of that year. But a week passed after a highly controversial match - and he did not.

Rainey had as good a chance then as any New Zealand whistle-men having been in charge of a number of significant representative and international matches in the previous lead-up years. But in 1971 the ultimate call of whistling a test match it did not happen for him. Nor in fact did the man, who everyone called 'Doc' Rainey, ever get the supreme honour.

And I for one have always thought Humphrey Rainey was hard done by.

In the games leading up to the first test of 1971 the Canterbury game against the British Isles (as they were called then) was the 11th game of 26 matches the tourists had on their massive itinerary of Australia and New Zealand. To that point the touring team had been going well. Very early on they had lost in Brisbane to Queensland but they were unbeaten to that point in New Zealand. Their eight wins in New Zealand had included a brilliant (nine tries to nil) 47-9 thumping of Wellington. The Lions were running hot and a week after the Canterbury game the first test against the All Blacks loomed for Carisbrook in Dunedin.

So seeing the tourists were going so well to that point, dare I wonder, did some of the hard-heads of the Canterbury forward pack discuss sternly in the days before their game, quietly among themselves mind you, that to that point of their trip, the Lions might not have been really tested up front by the rigours of what was allowable then in rugby's forward exchanges.

In the Canterbury pack of that year were blokes like Alex Wyllie, Alastair Hopkinson, Hamish Macdonald, and Tane Norton. They were all 'hard heads' of the deepest commitment. Would they have stomped on their Granny to get to the ball on a rugby field? Hmmm, by reputation, some of them might have.

There was a bit of history to this game. When Canterbury had played the British Lions team of 1966 some terrible fights had broken out very early in that game. A Welsh prop by the name of Howard Norris and the same Alastair Hopkinson had started the 'dreary parade of punches, obstruction and scrapping' (The great Sir Terry McLean's written words) in the first scrum. The Lions won that game 8-6. But by 1971 did the same 'Hoppy' (Hopkinson) and 'Grizz' (Wyllie) think that to start the game the same way against a new set of Lions had merit? And also, was revenge in their hearts?

Whoever did start the rough stuff the '71 game was another shocker. Only it was worse. Such was the extent of the foul play it became a disgrace to the game actually.

Depending on one's memory, and who you read now from the historical record, either two or three Lions had to go home as a result of the treatment which was meted out to them in the exchanges with the Cantabs. The Scottish prop forward Sandy Carmichael had a smashed face, the Irish prop Ray McLoughlin a broken finger (from a punch, it was said, against Wyllie's face!) and the Irish flanker Mick Hipwell, with a pulled hamstring, all journeyed back across the world soon afterwards. They were all replaced. Another Irishman Fergus Slattery lost his two front teeth somewhere on the famous field of Lancaster Park in Christchurch.

It must be said emphatically that the crowd of 53,000 would have seen that not all of the foul play had originated on the Canterbury team's side. But some of it must have. Though in the book and newspaper reports of the game there are very few mentions of Canterbury players getting knocked about.

The actual result of the fixture is rarely mentioned but in the aftermath of the repeat Lions win, this time by 14-3, you guessed it, the man who took most of the culpability for what had gone on was - of course -  the referee.

Here's something for you to be reminded of. If you are of sufficiently young years you might need to recall that in those days of rugby at all levels the referee was the only man who made decisions on the rugby field in any game. There were no TMO's, no timekeepers, no assistant referees watching with squinty eyes with poised flags on the sidelines, and most significantly from those times no live TV coverage and in the case of this particular game, no full replays.

But the blame, if that's the word, for the fighting and the general nastiness in the game from both teams did not go much onto either of the teams, compared to that on the referee.

And dear Humphrey took it hard personally. He took it hard that year and in some years into the future when I spoke to him about it.

Apparently at one point during the game after yet another malevolent exchange of fists and boots, the referee called the two captains, John Dawes of the Lions and Ian Penrose of Canterbury, together into midfield and said sternly to them both (the quote was something like) 'from now on fellas, in this game I'm going to only follow the ball and general play. If anything else goes on in this game, then it's up to you two to sort it out.'

I felt that was an honourable call for him to have made. All rugby then was an amateur game and therefore usually played in a kind of amateur spirit with a man's code of decency worldwide among most players. Sure there was acceptance of fighting in some games and some of it was vicious as big men 'sorted things out that the referee might not have seen.' But in the first 70 years of all international test matches only two players had ever been sent off (the New Zealanders Cyril Brownlie in 1924-25 and Colin Meads in 1967).

But starting games with punching from the first scrum as a tactic to intimidate opponents and then kicking and stomping players who were not near the ball was not really on. Canterbury in 1971 did a fair amount of that I am afraid.

The 'it's up to you to sort it out' quote was to haunt Humphrey Rainey later. Because of its blurred connotation that he was prepared to 'do nothing' if any further fighting took place he was deemed by many, (especially it would seem among officials of New Zealand rugby of the time) to not be of sufficient 'sturdiness of resolve' to ever control a full test at any time. So he never did.

It goes without saying that his reputation was also sullied by a venomous British press corps which cheer-led its way around that tour attempting and often succeeding in destroying anything good about New Zealand rugby and our way of life. They bum-sucked everything that came out of the Lion's managements mouths.

Humphrey's Rainey's record of appointments to significant games diminished after that Canterbury game. Although he was then ranked as about Number 3 among our referees (behind Pat Murphy of North Auckland and John Pring of Auckland) the two men ahead of him controlled most of them tests around those two or three seasons. For Humphrey there was always the lingering view held by some that he was not 'up to it' for the big time.

I knew Humphrey Rainey a little bit. He was a good man. For a time he was the General Practitioner doctor on call for me and my family in Lower Hutt. One quiet day in his surgery we talked about the 1971 Canterbury-Lions game in some detail. He told me he then had a desire to 'sent the record straight' from his point of view about what had happened in the fiery fixture which had had such a marked affect on his career.

And he did publish eventually. In 1981 a book of his, simply called 'Referee,' which contained a lot of very sound advice to younger men detailed his view of the Canterbury and Lions' attitudes and what he had attempted to achieve with his calling of the two team captains together on that horror day.

The book was a modest, soft-covered effort but I for one was glad he had put it into circulation. In its pages was his version of a man trying to keep that particular game decent - compared to others in the same game who seemed to have chosen a different path to achieve their goals.

Here was a very decent man whose career path as a first-class rugby referee might have led to greater things but in the prevailing world of rugby in his time there were some players who exploited the decency that the game has always deserved.

Rest in Peace good Doc; I for one am glad you chose to 'follow the ball.'

Summary: In his 'other life' away from rugby. Humphrey Barton Rainey was also an achiever and contributor.

He graduated MB ChB (NZ) from Otago University in 1949 and following years at Wellington and Hutt Hospitals he was anaesthetic registrar for one year in 1952.

In 1984 he was Awarded OBE (Order of the British Empire) in the Queen's Birthday Honours for services to the Maori Community.

Click to show D.B Clarke's 6 penalties versus the Lions 4 tries!

A no-nonsense French lock whose international career was spread over 14 seasons. At 37, he had the distinction of being the oldest player to appear in the first Rugby World Cup series in New Zealand in 1987.

Haget was a big man, standing 2 metres tall (6ft 6in), and he was a strong lineout jumper. His debut for France was on the tour of Argentina in 1974 and his last games for France were at the World Cup in New Zealand 13 years later. During his rugby days he was croupier at a casino in Biarritz.

From Wyn Gruffydd - the Welsh broadcaster; 'How Do You Know a girl from Cardiff has had an Orgasm?'

Answer; She drops her bag of chips!