You are here: Home » Favourite Photos » Where All Blacks Fell; Standing at a famous Rugbyman's grave. 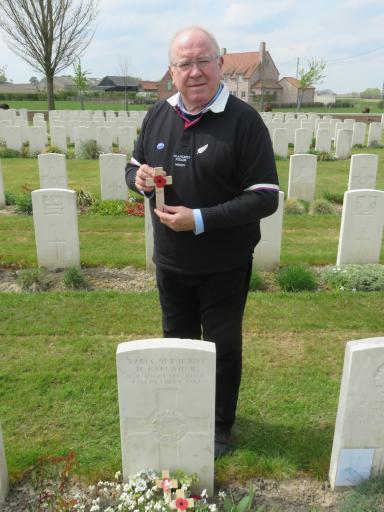 I consider it a very good fortune from my life to have visited the gravesite of the first All Black captain Dave Gallaher a number of times. I first went in 1991 with some All Blacks of the second Rugby World Cup team. But that day one of the team behaved very badly by goose-stepping between the rows and rows of quietly standing headstones. When the player even stuck two fingers under his nose and raised one arm in a disgusting 'Hitler Salute' as he marched I could have killed the young bastard!

But on other trips, sometimes with film crews or with All Black tour supporter's groups, it has always been a place of real reflection and respect. This time it was the same. We were a small family group and no one else was in the Nine Elms cemetery at Poperinge in Belgium when we arrived. I took the opportunity to write on a small cross the names of the people in our group and I pushed our modest tribute into the turf right there.

Dave Gallaher died in the battle of Passchendaele on October 17 2017. He had lied about his age to go and fight for his adopted country of New Zealand (remember he had been born in Northern Ireland).

World War I was his second entry into serious war experiences. He had been in the Boer War in 1899-1902 as well. By 1903 he was an All Black and in 1905 he led the famous 'Original All Blacks' on their superb tour of UK and France. As they were the first New Zealand team to be called 'All Blacks' Gallaher was therefore the first true 'All Black captain.'

It was a measure of the respect Aucklanders and Kiwis in general had for his memory that only five years after his death and burial all Auckland senior club rugby teams began to play, as they still do today, for the Gallaher Shield.

It was wonderful to be back to Poperinge again.

A dedicated player who became only the third forward from Ireland to reach 50 international appearances. Keane was never a great lineout leaper or scrummager or runner in the open. Rather he played the game in the dark depths of rucks and mauls, where he was as good a grafter as the game has seen. For heart and pride, and the desire to do his utmost for Ireland, he could not be bettered.

Maurice Ignatius Keane first played for Ireland in 1974 in a 6–9 loss to France, but wins in two other matches that season gave Ireland the Five Nations title. In Keane’s fourth international season for Ireland, he made the British Isles team to tour New Zealand, after one of the team’s originals, Geoff Wheel, had to withdraw on medical advice.

Keane was in the Irish team that won the Five Nations championship in 1982 and in the one that shared the title with France in 1983. The other years of his international career were lean: in 52 internationals Keane was only in the winning team 17 times.

Keane had a delightful personality and a wicked sense of humour and many stories, true, exaggerated or otherwise, are still told about him.

In the 1978 New Zealand v Ireland match at Dublin, the Irish were being well beaten in the lineouts, where Keane was marking the All Black giant Andy Haden. The only chance Ireland had to win lineout ball was with their complicated lineout calls, which none of the New Zealanders could decipher. The All Blacks were helped on one occasion when the lineout call went out from the Irish halfback and they heard Keane cry, ‘Oh God no, not to me again’!

Moss Keane was the first Gaelic footballer to play rugby union for Ireland after eligibility rules were changed. He remained an enormously popular figure in Ireland after his retirement from playing.