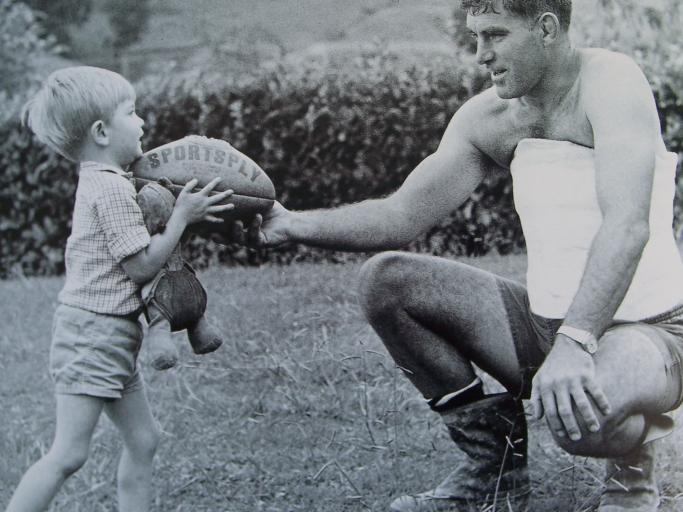 The mighty Colin Meads of King Country New Zealand, who was the symbol of everything that was tough about rugby in the 1960s and '70s. Here he is with his upper body covered in plaster playing with his young son. Weeks earlier near his farm Meads had suffered a broken back after a motor vehicle crash. A matter of months later he had recovered sufficiently to play full international games again, though his All Black days were over.

One of the most brilliant wings the game has known, Gerald Davies was the prince of sidesteppers, a master of speed and a crowd-pleaser in the extreme. Had he not missed several tours for personal reasons, his talent would have been more widely acclaimed.

Davies finished his schooling and education at Loughborough College and Cambridge University. Imbued with their spirit of playing enjoyable rugby, he soon made his way into the Welsh team. His first international was against Australia in 1966, as a centre.
He played 12 full internationals in that position before making the change to the wing. If he was a success as a centre (good enough to be chosen as a British Lion to South Africa in 1968) he became a wing of exceptional class. His size (only 73kg – 111/2 stone) meant that he was rapidly becoming outmoded as a centre at a time when crash-ball specialists were being used more and more. It was as a wing that he could display more expressively his talents for speed and balance.

Davies was considered one of the best sidesteppers the game has seen, especially off his right foot. Many of his markers and opponents could attest to this, none more so than the Hawke’s Bay team in New Zealand in 1971, which played the British Isles at Napier. Davies sidestepped repeatedly at high speed and ran in four brilliant tries.

Davies played all four test matches for the Lions on that tour, having earlier played in the third test at Cape Town in South Africa in 1968. He declined to tour twice with the Lions, to South Africa in 1974 (uncomfortable with what he had seen of the apartheid policies in 1968) and to New Zealand in 1977, but continued as an international until June 1978, when he quit at the age of 33. His last test match was Wales v Australia at the Sydney Cricket Ground.

At the time his 46 appearances on the wing and at centre made him Wales’s most-capped three-quarter. He and Gareth Edwards then shared the record (20) as the highest try-scorers in Welsh internationals.

Gerald Davies later joined the list of former players who wrote and broadcast about the game. He had a number of books published and was also been an expert television presenter and commentator.

His standing in Wales was such that he was chosen to be the Opening Ceremony ‘voice’ of the Rugby World Cup in Cardiff in 1999.

In 2009 the respect in which Gerald Davies was held was confirmed when he was invited to be the Manager of the British and Irish touring team to South Africa. He also played significant roles as a member of the Board of Directors for the Welsh Rugby Union and a sitting member of the International Rugby Board.