You are here: Home » Favourite Photos » Another Holiday Highlight 2015 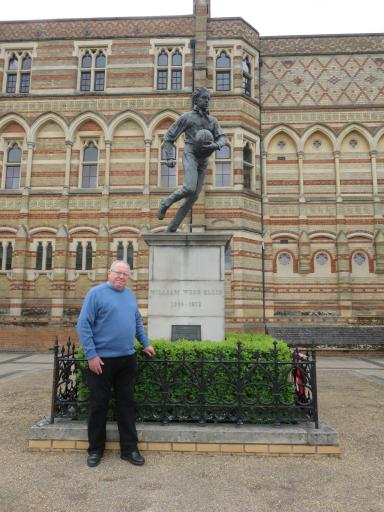 If you are in England and near the town of Rugby in Warwickshire it really behoves you to pay a visit, right? So this year I did and after a night in the nearby village of Dunchurch a visit to Rugby on its Market Day was a must - and fun.

Every shop and stall had a rugby 'sign' outside it. I took a lot of shots which may or may not be used sometime - but in the end all visitors like me are drawn to the impressive Rugby School, right in the centre of town. Here it is said the young scholar William Webb Ellis spoiled a football game by 'picking up the ball and running with it' in 1823. Thus the idea of the game of the Rugby's Games Rules were started.

The statue in the street was put in place for the 1999 Rugby World Cup and these days is a popular tourist attraction. I had to wait while a film crew did a 'piece to camera' but then it was my time... A nice souvenir followed.

The most accomplished referee of the 1930s who later became a powerful administrator of the game at an international level.

Gadney took charge of 15 internationals and six Oxford-Cambridge matches between 1936 and 1948. Among the major games he refereed were the New Zealand touring team of 1935–36 against Scotland and against Wales; France v Australia in 1948, and no fewer than 10 Five Nations games.

He later became a president of the Rugby Football Union and one of England’s representatives on the International Rugby Board (1965–71).

Cyril’s brother Bernard was also an accomplished player, who appeared 14 times (nine as captain) for England as a scrumhalf between 1932 and 1938.

Who played ten tests for the All Blacks - but only in NZ?

Auckland centre Ron Rangi played ten tests in a row 1964-66 but never was picked to tour away.